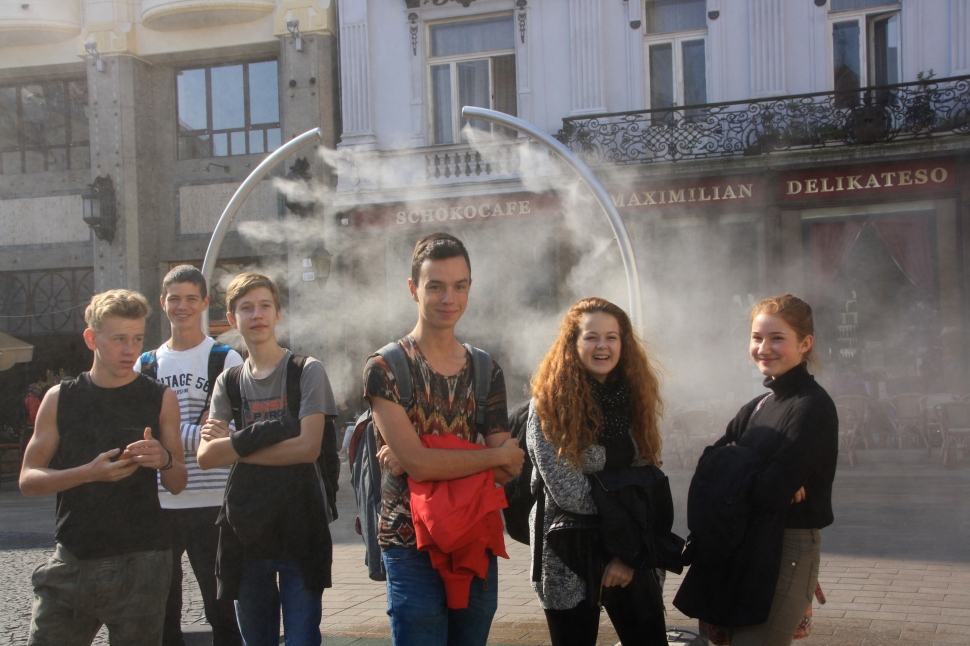 Bratislava: Little brother is growing up

How many times do we plan for a celebration. A big night. Only to end up with a headache and looking for a way to get home early.

Then there are the times we are in a hurry but bump into friends. One thing leads to another and you thoroughly enjoy everyone’s company.

The bus ride from Hlohovec to the Slovakian capital of Bratislava was tiring. Most of the choir slept after the concert they had just given at the Empire Theatre in the rural town and the dinner that followed at a winery.

We are into the second of a three-week concert tour of Central Europe with the Sunshine Coast Oriana Choir. A journey that finds us half-way around the world from the choir’s base in Queensland, Australia.

The darkened countryside slips past, broken only by the oncoming lights of traffic on the country roads and by the occasional village or farmhouse.

Some time after 11pm we enter the outskirts of the city … a lot of new factories, showrooms and warehouses on the outskirts. The VW sign was up in lights, the car-maker defining itself as the main industry in town.

Volkswagen Slovakia boasts an assembly hall that covers an area equivalent to 21 football pitches and has  Audi, Skoda, SEAT as well as Porsche models in its stable.

Different from the farming communities we had been through the day before as we crossed the border from Hungary into southern Slovakia.

Enterprising. That seems to sum up Bratislava as we glide along the motorway into the eastern suburbs of the city. 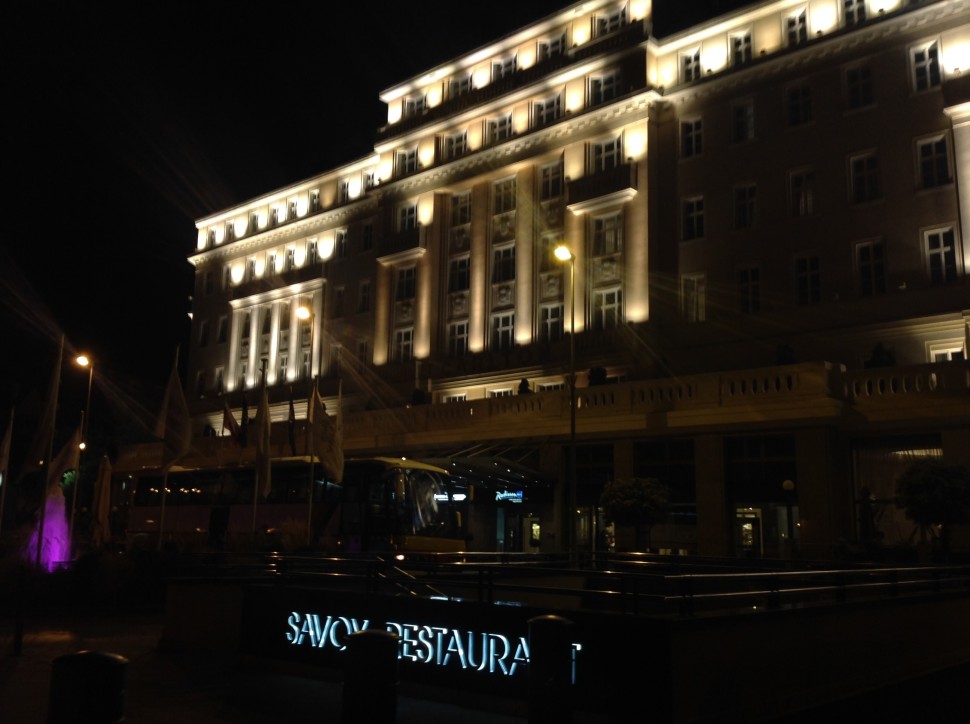 Just before midnight the coach makes its way down a series of one-way streets and into the forecourt of the Radisson Blu Hotel Carlton.

A water feature plays out the front of the impressive structure, with spotlights highlighting the classical architecture. It sits nicely between the city centre and the River Danube.

The choir group tumble out of the coach and look for their travel bags. The bus driver had been having an issue with a taxi driver not wanting to give up his preferred parking spot.

Around the streets there are some light-weight barricades but generally a fresh, clean feeling. A welcome change from the built-up confines of Budapest’s avenues and lanes.

The hotel is magnificent. A king-size bedroom with it’s own desk. No need to type on the iPad while sitting on the end of a bed. It would be comfortable enough for a business executive or politician.

Look out the window to a city square lined with trees and the shapes of impressive buildings that are picked up by the street lights. Then there is the amazing blue church spire that is so mesmerising against the night sky.

Sleep comes after a quick update on the choir’s facebook site about the Hlohovec concert and the dinner after at a local winery.

Early next morning I go for a walk. It’s the type of morning you expect in Central Europe during autumn. Clear yet cool enough for a pullover and a beanie to keep the head and ears warm.

There are just a few people in the square. Hviezdoslavovo Namestie is the full title – named after Pavol Hviezdoslav, a poet, dramatist, translator and for a short time member of parliament. 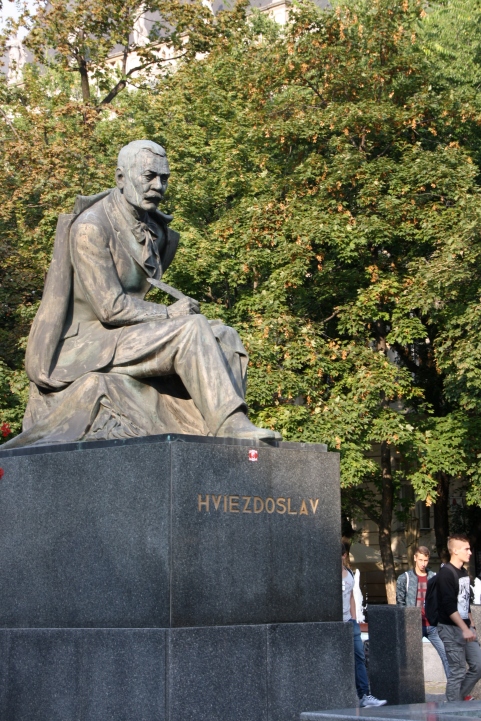 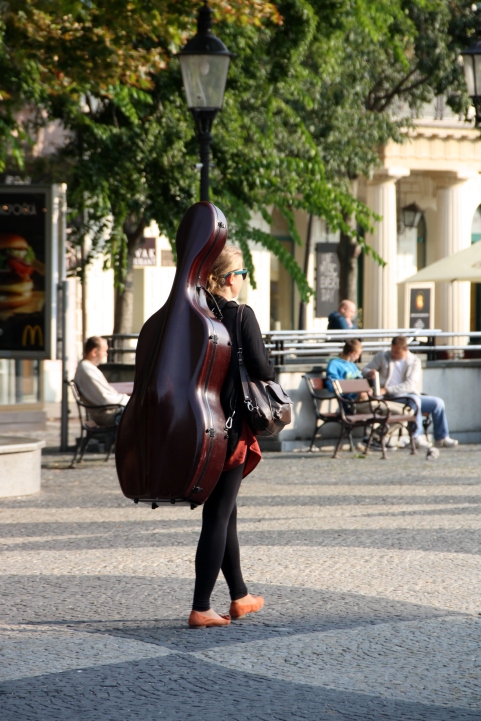 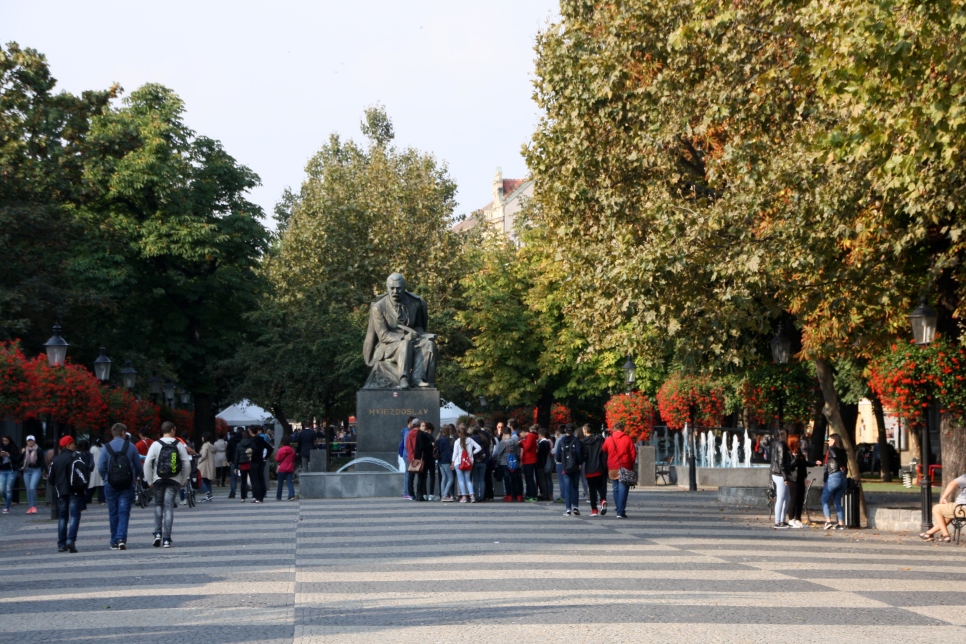 There are police patrolling the building opposite. Slovakia, it turns out, holds the presidency of the European Union Council and had just played host to the 4th GLOBSEC Tatra Summit  investment forum. None other than German Chancellor Angela Merkel addressed an informal meeting of 27 EU heads of state and government a few weeks earlier.

The Slovakian Philharmonia is the headquarters for the EUC for the year. It is across the street on the eastern side of the hotel. So who knows who was sleeping in my bed at the Carlton.

The new face of Slovakia is really on show at Bratislava. Occupying both banks of the River Danube and the left bank of the River Morava, the city borders Austria and Hungary.

Bratislava is the political, cultural and economic centre of Slovakia, the seat of the Slovak president, the parliament and the Slovak executive.

As a reflection of the confidence people have in Bratislava, it has been given the honour of hosting the European Union for the next 12 months.

It’s good to walk down by the river and watch the sun rise … that same fiery red ball rising up through the haze I saw in 1970 on my first trip to Europe. Watching the city come to life. The trams, the cyclists, those others out walking. 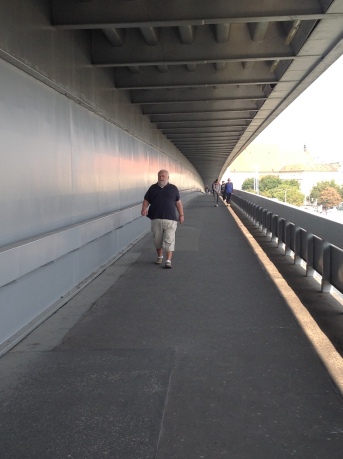 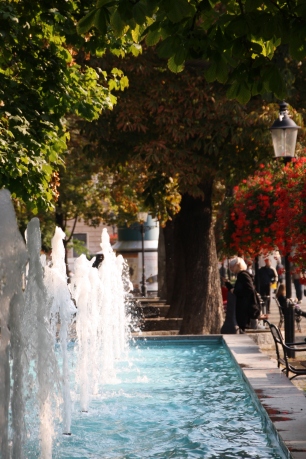 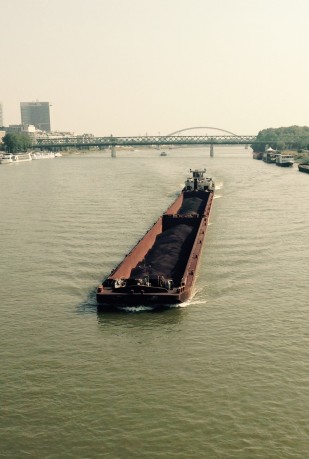 To the west is a single-span bridge across the river. Most SNP or the UFO Bridge is symbolic of the nation’s future and is highlighted by a tower on the southern end that looks like a space ship.

The seventh largest hanging bridge in the world and you get a panoramic view of the city from the flying saucer-like observation deck and restaurant.

The SNP commemorates the Slovak National Uprising in 1944, an armed insurrection organised by the Slovak resistance in an attempt to resist German troops that had occupied Slovak territory. The bridge was built between 1967 and 1972 but renamed Novy Most, the New Bridge, in 1993.

After a fine breakfast in the hotel there is time for a walking tour of Bratislava, concentrating on the historic old town.

It’s a downhill walk from the medieval castle and past the tall spire of St Martin’s Cathedral. 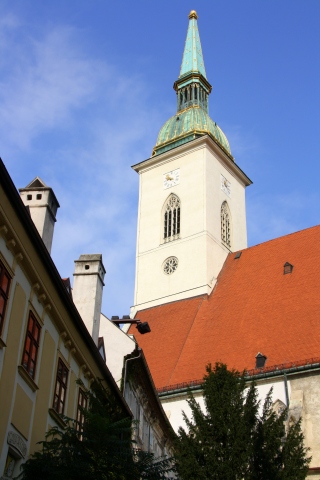 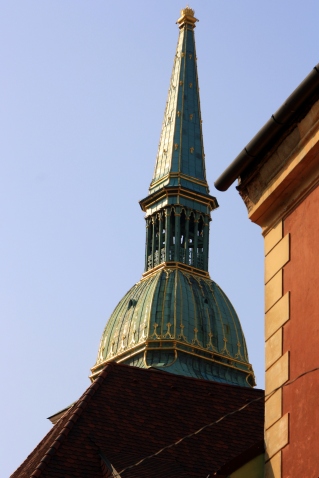 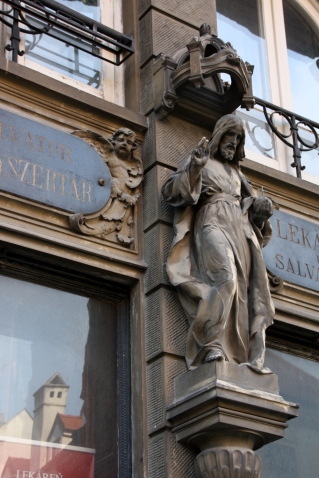 The maze of cobblestone streets are mostly limited to pedestrians. Shade trees and fountains decorate small parks, and you have an abundant choice of cafes and restaurants, with outdoor seating in all sorts of place. At restaurants, beneath trees, beside statues and a water feature depicting the importance of the rivers to the city.

I come across a group of teenagers sitting on a bench.

“Fashion killed my childhood.” It’s on the cap of the young man in the centre.

It says a lot. Especially about the attitude of this new generation. Outspoken. No longer downtrodden. 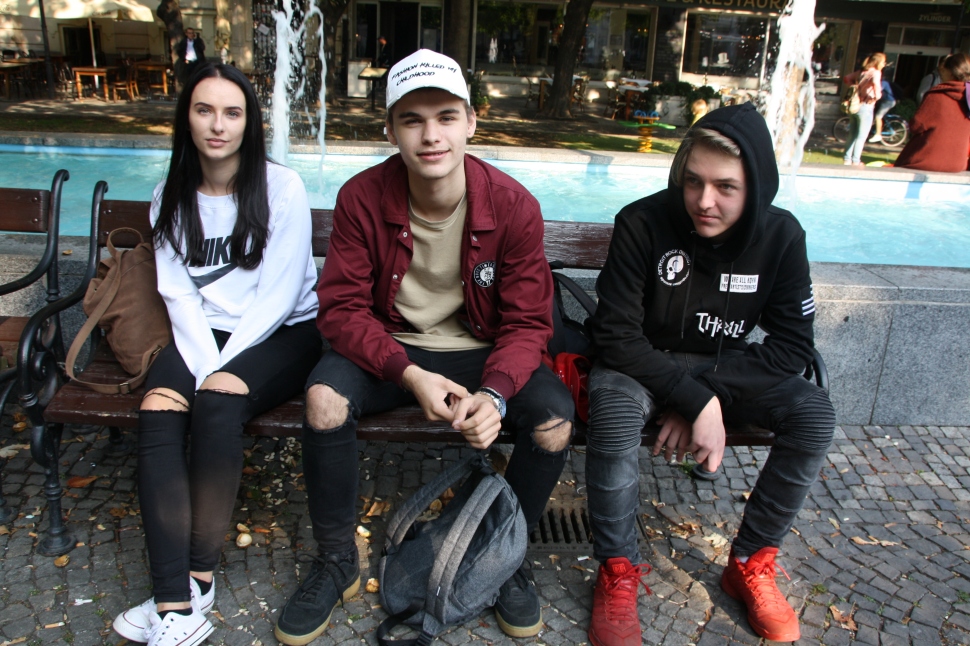 Then there is the metal tube arch in the square near the town hall. Hundreds of tiny holes in the piping spray a fine mist of water over all those who walk, run or jump through it.

A celebration. A shaking off of the past and stepping into a brave new world.

There are school children everywhere for an international day of the child. All sorts of activities are taking place at the foot of the statue to Hviezdoslav.

We sit and have a coffee. Groups of children pass by with balloons. Red ones, green ones, yellow ones.

There is one that stands out. It’s orange and the sun shines through it.

That moment best represents Bratislava to me. Full of hope and enthusiasm, brightened by sunshine. 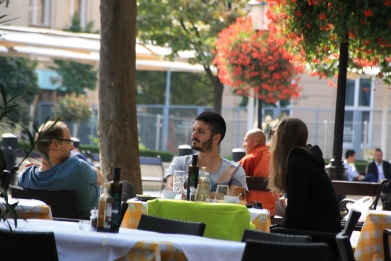 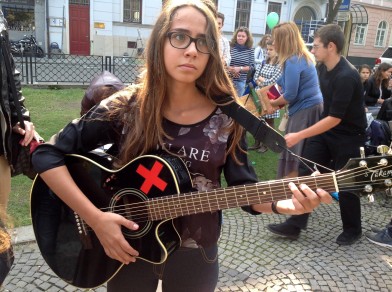 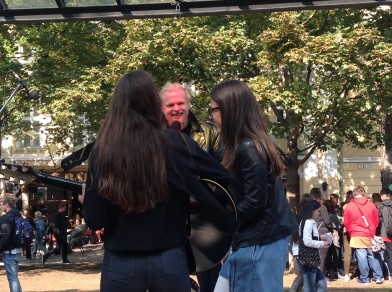 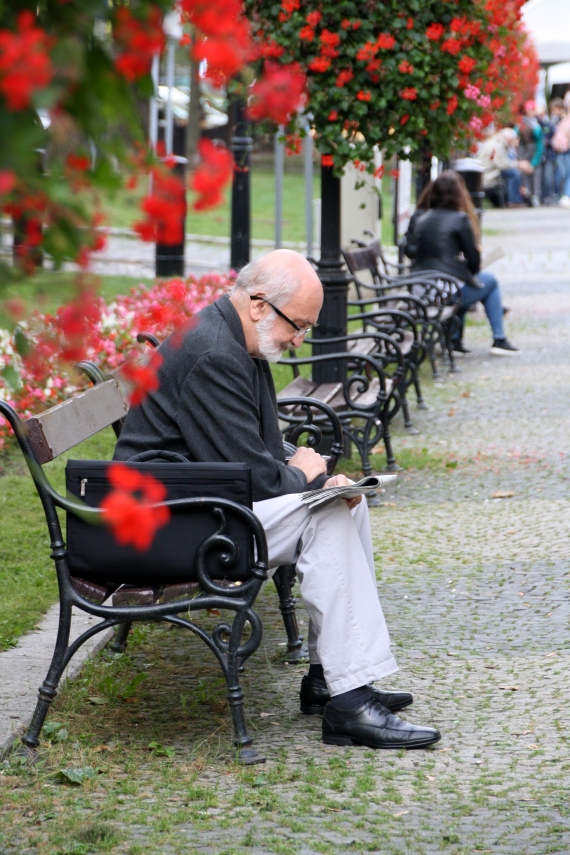 There are streets named after Hviezdoslav in almost all Slovak towns. In 1918, he became a member of the newly created Revolutionary National Assembly (provisional governing body, later parliament) in Prague, and for a short time served as its representative.

He was then chosen as the leader of the re-established Slovak Matica, a cultural institute that during the darkest years kept Slovak literature alive.

From the 10th century Slovakia became part of the Kingdom of Hungary. That lasted until the end of the First World War when the Treaty of Trianon saw Czechoslovakia created as a country in its own right. But like so many central European countries it has been washed over time and again by the tides of war.

Between 1939 and 1944, Slovakia was a German-controlled state. Then, it was conquered by the Soviets to recreate a new Czechoslovakia, but one that would be Communist this time. This lasted until the Velvet Revolution of 1989 which saw the fall of Communist rule in Czechoslovakia. 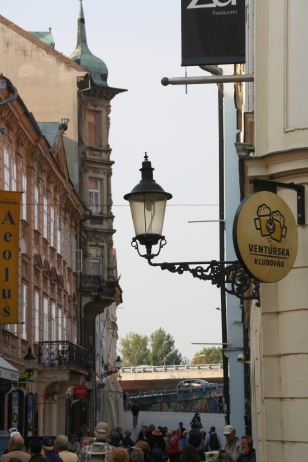 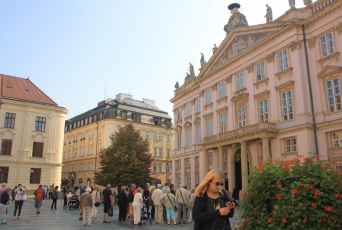 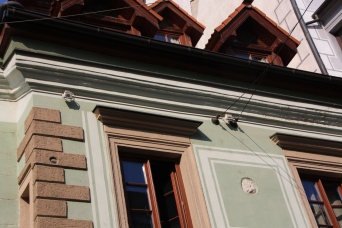 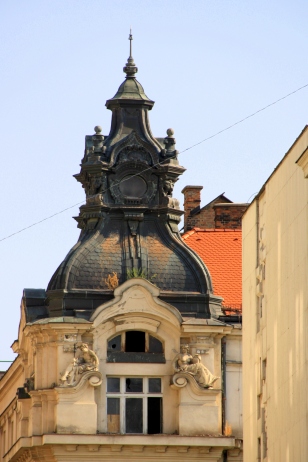 Four years later the peaceful differences between Czechs and Slovaks when rebuilding their nation after the fall of Communism led to the dissolution of the country into two separate and independent nations: the Czech Republic, and of course Slovakia (Slovak Republic).

The two nations cooperate together frequently on international issues.

That is the key. Slovakia is the little brother to the Czech Republic. Both are enjoying their nationhood and while big brothers can be more responsible, conservative, little brothers enjoy the chance to have their day in the sun.

Bratislava has a population of almost 415,000 and is the administrative, cultural and economic centre of the country. It is surrounded by farms, vineyards, agricultural land, and tiny villages. 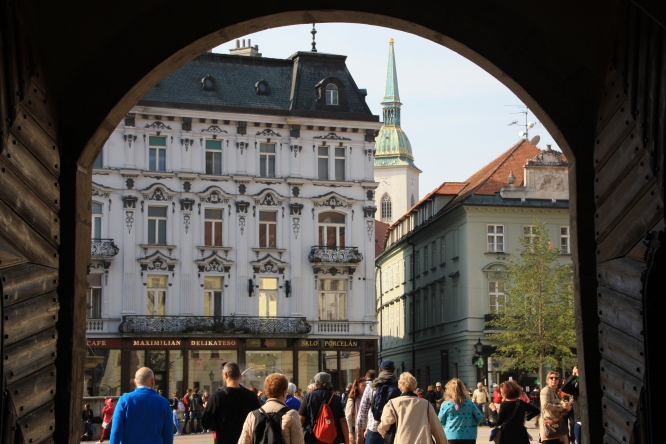 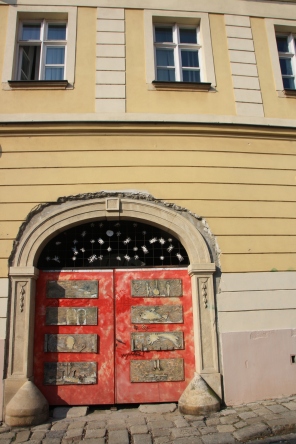 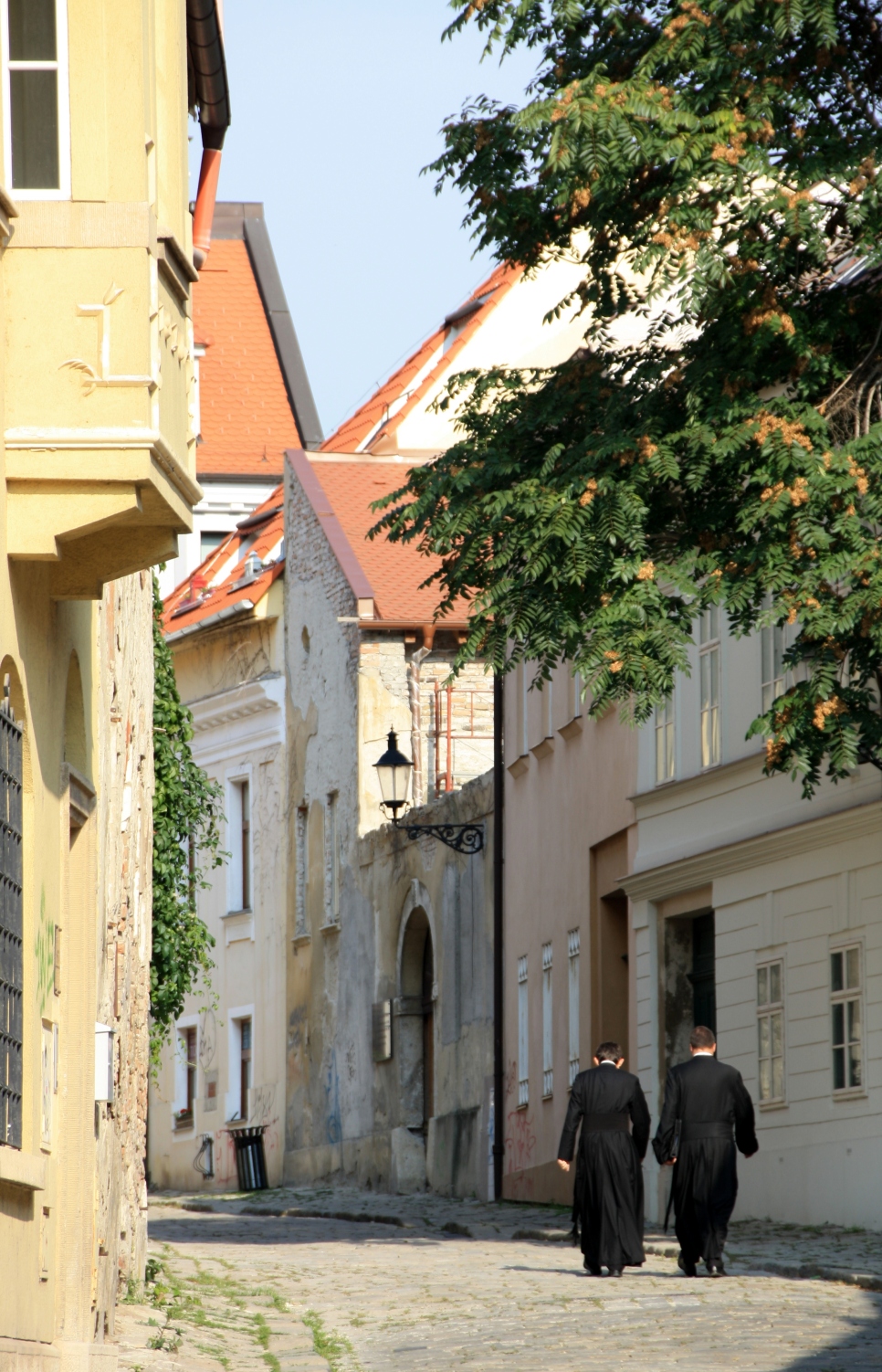 Generally, Bratislava is a walking city. The centre is very small and cosy and you can easily walk from one side to another in a few minutes. Yet it has a rather good public transportation system of trams and buses. 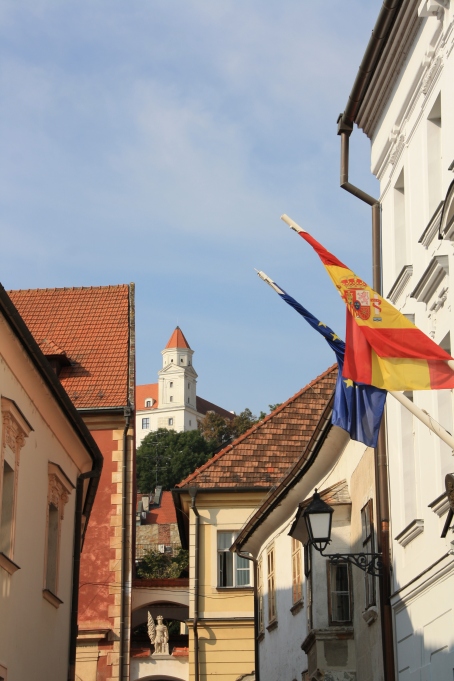 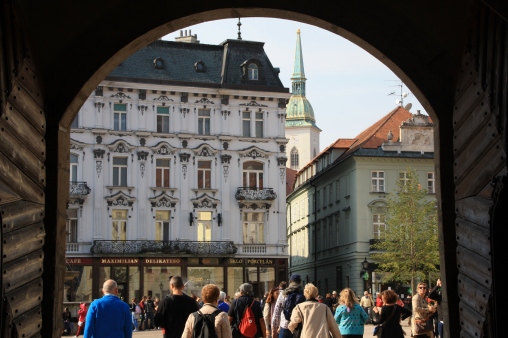 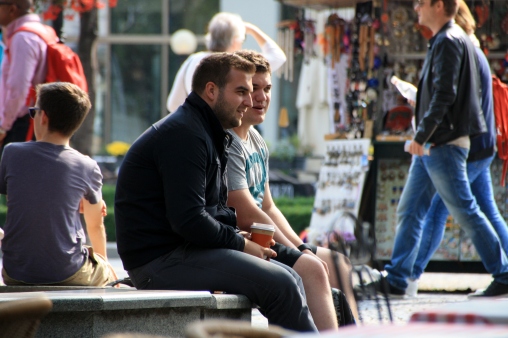 All too soon it’s time to board our coach and head westward towards the Austrian border.

Bratislava is certainly surprising. A curiosity. A place where a day visit is too short.

It’s like an entree, an appertiser that entices you back to experience a full meal.

Freeway signs point to cities in three different countries. So diverse, depending on which road you take.

Vienna is less than 100km away, the shortest distance between any two capitals in the world. It’s a reflection of where we sit in history. 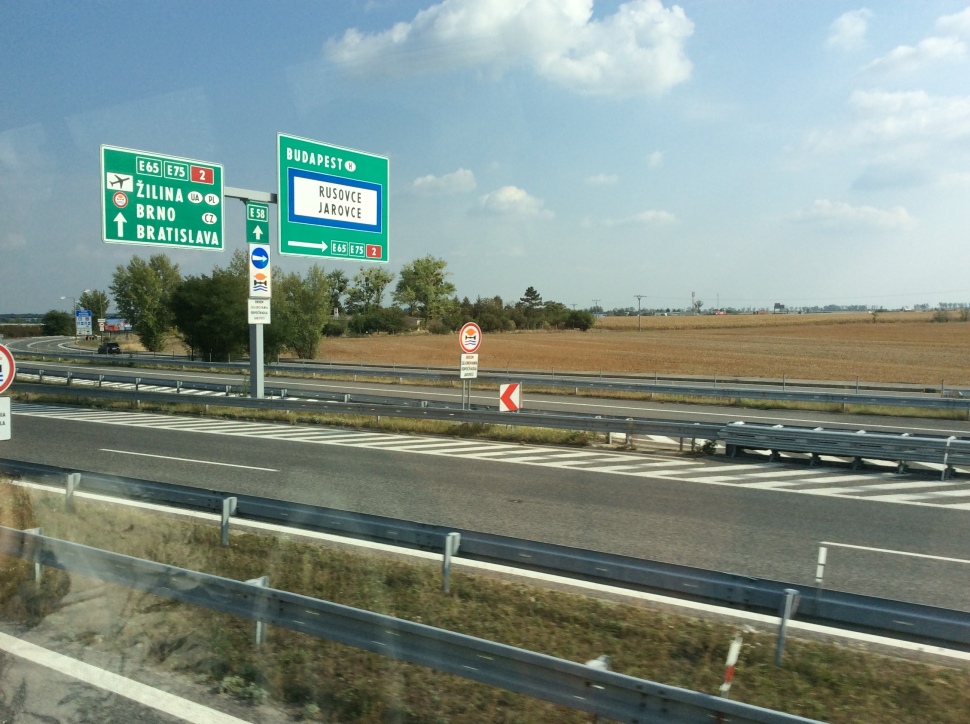