“Have you ever seen Sydney from a 747 at night?

“Sydney shines such a beautiful light

IT’S like the enigma that is Australia. In my case, it was flying into Sydney on a 707 … across the sea of red-tiled roofs and swimming pools in the back yard.

Years later, singer-songwriter Paul Kelly summed it up so well in his song.

“And the curling waves on a distant break. And the sleeping city just about to wake. Have you ever seen Sydney from a 747 at night?’’ 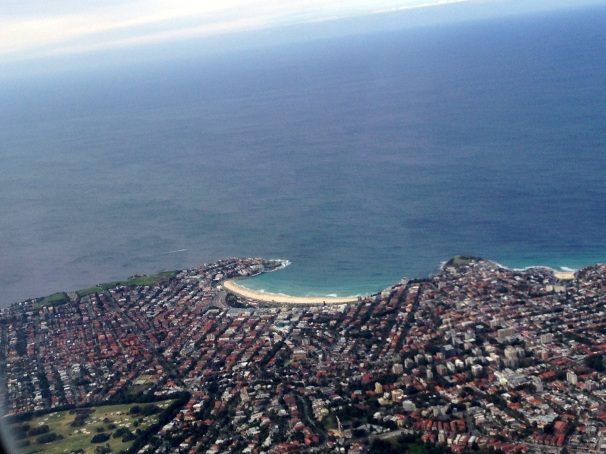 Yet coming into Sydney has not always been this way.

Less than 250 years ago, then Lieutenant James Cook and his crew rounded the rugged and rocky outcrop and found shelter in the waters of a bay.

On the shore were indigenous people, the smoke rising from their campfires.

It’s the image that fills my mind as I sit in the car on the foreshore of Botany Bay.

I’m looking through the windscreen as planes come into land at Sydney Airport, its runways jutting out into the bay.

The southern shore of Botany Bay, looking towards Capt Cook’s landing site with La Perouse on the northern shore.

Rubbish litters the foreshore at Botany Bay, near the landing site of Capt James Cook in 1770.

On the northern shore is the main container terminal for shipping at this busy port.

On this, the southern side, the long arm of the jetty for the oil terminal has a ship moored against it.

A few hundred metres from the Kurnell general store and post office is the monument to Cook’s landing.

What a contrast. Your thoughts cannot help but dash this way and that, like the wipers on the windscreen.

This Australia, that Australia. And so we sit … somewhere in between.

I wait for the light rain to stop then get a take-away coffee and start walking to the east, towards the monument, to where white man stepped ashore.

How long has it taken me to get to this spot.

Kurnell Village Store on the beachfront at Botany Bay.

Fishing shack at Kurnell on the beachfront at Botany Bay.

“At daylight in the morning we discovered a Bay which appeared to be tolerably well sheltered from all winds into which I resolved to go with the ship and with this view sent the Master in the Pinnace to sound the entrance.’’ – James Cook, Endeavour, off Botany Bay, 28 April, 1770.

A substantial monument … of sorts. Yet in such a nondescript setting.

Rubbish litters the beach. The grime of Port Botany and Sydney’s soaring skyline is in the distance.

The signs of a modern city. Still the main entry to Australia yet so different from back in 1770.

It’s as if the foundations of the nation are being trampled on.

It says much. I walk along the path, to Sutherland’s monument … the sailor who died a day or so after stepping ashore from the sailing ship Endeavour: the first white person to be buried here.

Parkland at Botany Bay National Park, near the landing site of Capt James Cook in 1770.

Monument to the landing of Capt James Cook at Botany Bay in 1770.

Monument to the memory of seaman Forry Sutherland who died at Botany Bay in 1770. 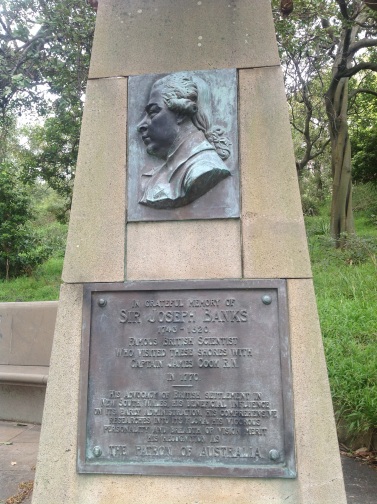 Monument to the work of botanist Sir Joseph Banks at Botany Bay in 1770.

The bay itself being named after Cook and botanist Joseph Banks. Cape Solander, in honour of another botanist, from Sweden, who was aboard Endeavour.

It’s an eerie feeling. Not a loved place. Tall trees and lawn. The creek where they found water.

I walk up into the bushland. What’s that? The sound of Aboriginal children and the

clicking of sticks in rhythm. I look around. No-one.

Then walk on and again, the sound of someone talking, telling a story. Still no-one.

Then I stumble on to the origin … a walking trail with recorded sounds.

It has me mesmerised at first. Here I am walking in the footsteps not of just the first Europeans but the first inhabitants of the area. The soundtrack is so realistic – the bushland representative of the heritage of the lands.

Just like it must have been all those years ago. 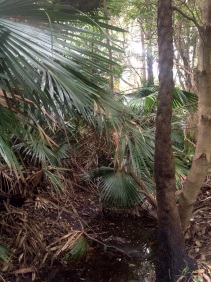 Bushland at the creek where Capt James Cook landed at Botany Bay in 1770.

Bark art on the footpath at Botany Bay National Park.

I walk out past cliff overhangs then up on to the road leading through the national park where high sandstone cliffs look out at the open ocean.

This was the way into the harbour. Just as it is today.

Rock overhang at Cape Solander at the entrance to Botany Bay.

A ship enters Botany Bay with the Sydney skyline in the distance.

Yet just how did these men in a flimsy sailing ship make it to the other side of the world.

On a whim more than a quest. To sail to Tahiti to observe the passage of Venus in the sky … and see if they could discover the great southern land. Just a rough idea at the time.

The Dutch and the Portuguese, together with the Spanish, had bumped into it but were not aware of what secrets it held.

Cook, the great navigator, unlocked much of the mystery. At no time did he land on Australian soil with the title of Captain.

It was only on his third voyage to the Pacific, the one that took in Hawaii and which claimed his life, did he sail as such.

Today we can luxuriate at the hotel next to the international airport.

Counting the planes roaring in and out of Sydney and Australia.

It seems like a plane a minute carrying thousands of modern “adventurers”.

Despite its relative isolation, the southern shore of the bay is dominated by a mixture of pristine national park and heavy industrial use that includes the old Caltex Oil Refinery, sewer treatment, and historical sand-mining facilities. 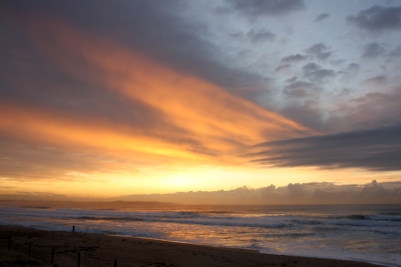 Cronulla is just to the south of Botany Bay. Another beautiful sight is the sunrise over the breaking surf.

Ocean swimmers heading for open water and those warmed against the winter morning by insulated coats and tracksuits make their way to the heated swimming pools – steam rising off the water.

I have a coffee at Bianchini’s Espresso, just up from the beach.

It’s good to get the feel of this place.

Later that day, I drive north along the coast – Maroubra, Coogee, Bronte, Tamarama,

Safely based at an Airbnb in North Bondi, it’s time to set out on foot and see again this

most famous of beaches.

“In the morning weighed with a light breeze at NW and put to sea … at noon abreast of a Bay or Harbour where there appeared to be safe anchorage which I called Port Jackson.’’ – James Cook, Endeavour, at sea, 6 May, 1770.

Cook noted the Heads, but made no effort to explore beyond them. Had he done so, he might have saved Captain Arthur Phillip considerable anxiety 18 years later.

Phillip found the lack of fresh water, in particular, made the site unsuitable for settlement.

So he sailed north.

January 21, 1788: “We had the satisfaction of finding the finest harbour in the world in

which a thousand sail-of-the-line may ride in the most perfect security.’’

Captain Phillip, happy with the location and the particular cove he named Sydney, camped overnight and next morning started the return to Botany Bay.

On the morning of January 24, the French exploratory expedition of Jean-Francois de Galaup, Comte de Laperouse, was seen outside Botany Bay.

On January 26, 1788, Captain Phillip selected Port Jackson as the location of the new colony.

His party began clearing ground near a run of freshwater, later known as the Tank Stream, a flagstaff was erected close to the landing site, the Queen Ann jack was raised and possession was taken for His Majesty King George III.

Phillip was a far-sighted governor who soon saw that New South Wales would need a civil administration and a system for emancipating the convicts.

Contrary to popular opinion that the majority of the people on the First Fleet were British, there were said to be people from 22 races including Irish, Scottish, Welsh and the Channel Islands.

According to the Fellowship of First Fleeters, there were also African, American and French convicts on board, as well as from Madagascar, West Indies, Holland, Germany, Norway, Portugal, Jamaica, Sweden, Bengal India and Scandinavia.

The so-called Irish rebels arrived at a later date.

As a reminder of that windscreen-wiper effect of Australia, I investigate the Republik coffee shop and bakery at North Bondi and am served by a Dutch girl and a South American barista.