INTO THE HEART OF TASMANIA

IF we are there later than 2.30 we can stay in a converted set of stables dating back to the 1860s.

That was the beauty of internet.

On a five-day visit to Tasmania with my daughter a few years back, we were looking for a place to stay for the night. But we could not have known the twists and turns the next 24 hours would take.

We had just enjoyed a wonderful night at an eco bed-and-breakfast in the Huon Valley, about an hour south of the state capital Hobart.

High on the range, surrounded by trees, the home gave magnificent views over the Derwent River and the northern part of Bruny Island.

With a rental car, we had expected to see as much of Tasmania as we could in the few days. After all, it’s not that large in area … perhaps half the size of the next biggest state in Australia, Victoria. 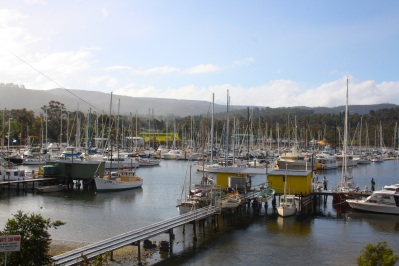 It’s a bit more than a two-hour drive from Hobart, in the south of the island, to the second-largest city Launceston in the north.

Tasmania is known for its bed-and-breakfast places, its inns and guest houses, as well as hotels. Yet this particular weekend it seemed there was not a lot of choice.

This was despite the fact there were no big sporting events on, no major seminars or conventions. 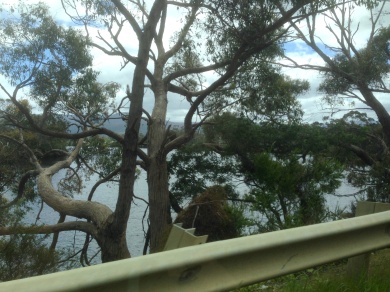 The Royal Hobart Show was late in October and the Sydney-Hobart Yacht Race was not until the end of December.

Yet distance was not that big an issue. If Hobart was booked out we could always try Launceston.

After spending the morning exploring the Huon Valley, known for its fruit – especially apples and pears – we stopped at the town of Cygnet for cake and coffee at the Lotus Eaters cafe. 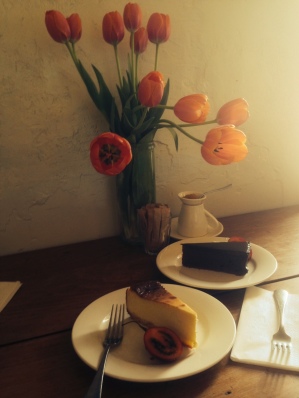 That’s when we started looking at our options for the next few days.

We were trying to get to the Cradle Mountain region in the north of the island, then swing back down the picturesque east coast to Hobart for the flight home.

That was where the iPad came in handy.

My daughter was searching for a place to stay and came up with the renovated stables at Oatlands, in the centre of Tasmania, about half way between Hobart and Launceston.

The stables, named Forget-Me-Not Cottage, are at the rear of Amelia Cottage which was built by Thomas Burbury in 1838 as a changing station for horses between Hobart and Launceston.

Forget-Me-Knot Cottage is a two-bedroom stone cottage – originally the stables and has been beautifully renovated after retaining the three original sandstone walls.

The cottage would be ready for us after 2.30. 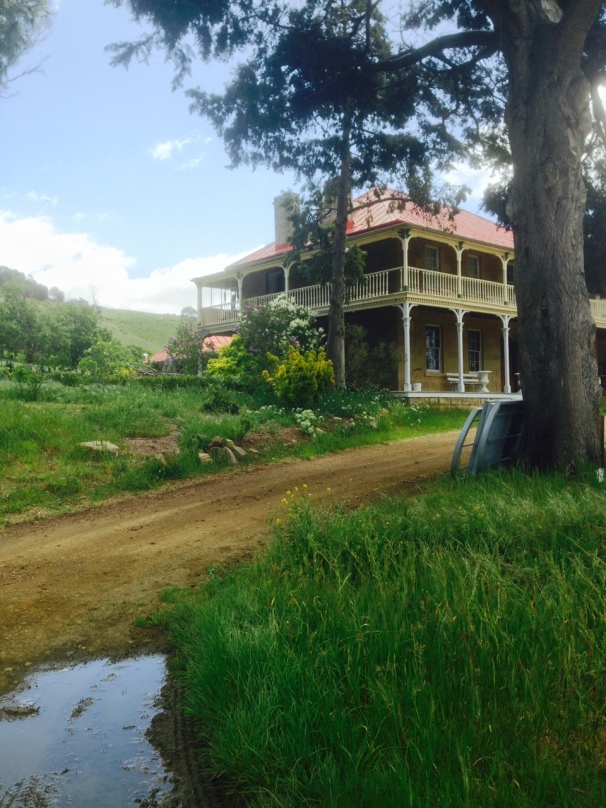 And the drive through the heartland of Tasmania was filled with photo opportunities, particularly around Kempton and Melton Mowbray.

Grand homesteads and an abandoned hotel that would have made the perfect spot to film a movie.

Reflections of a former era when travellers broke their journey between the two cities instead of completing it in such quick time today with a car.

While it was early November, the days were clear but the nights were chilly. Summer may have been just around the corner but as we pulled up at Oatlands it felt that the change of seasons still had some way to go.

The town is now bypassed by the highway but it was a wonderful detour.

Blending the past with the present, Oatlands is an example of changing times.

Its settlement dates back to 1811 when Governor Lachlan Macquarie considered it resembled the grain-producing regions of Scotland due to the fertile soil and being well watered.

He declared it to be “a very eligible situation for a town.”

Macquarie chose the name Oatlands in 1821 and when George Arthur became the new Governor of Van Dieman’s Land – as the island was first named by European explorers – the plan to make it a town went into action.

This was a decade before the founding of Melbourne in Victoria by John Batman, who set out from Launceston in 1835 aboard the sloop Rebecca with the intention of forming a settlement there.

Convicts working on the road from Hobart to Launceston were housed at Oatlands.

Today it is part of the strong sheep grazing industry that stretches down the centre of Tasmania.

Forget-Me-Not was established as a cottage in 1986 and access was simple – almost like opening the page of a picture book.

A long, gravel driveway that wound its way up a slight hill towards the main street. Rambling fences, with paddocks either side.

And then the stone cottage with entry alcove, chopped wood and heavy timber door.

There was a mezzanine bedroom as well as main bedroom and bathroom on the ground floor with the kitchen and living/dining area.

Apparently creator of the cottage Lynne Headlam was given the opportunity of collecting timber and fittings from a house called Melrose at nearby Tunbridge to include and safeguard. They came from descendents of the Burbury family.

These included the upstairs floorboards, the Baltic pine used in the bathroom, the Huon pine sink, the clawfoot bath, all the doors and doorways.

The pine used for lining the cottage was milled near Oatlands. 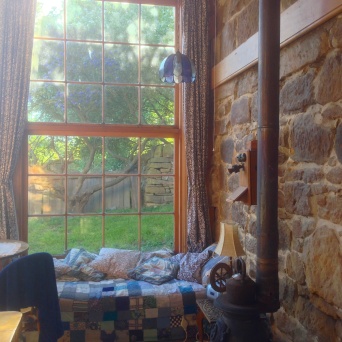 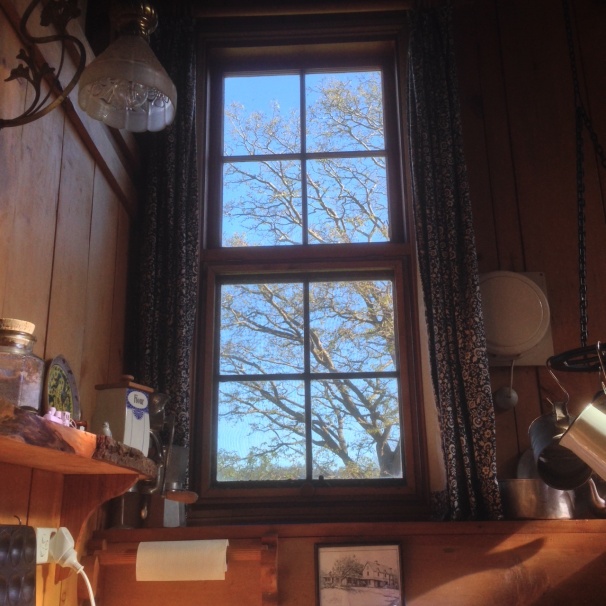 The cottage is filled with memorabilia and features east-facing near floor-to-ceiling windows with stained glass highlights.

Knick-knacks that evoke childhood memories, the same with the pots and pans in the kitchen, the crockery and accessories. The scrapbook of old photos and newspapers, a glimpse back into a less hectic time.

There was even a wall telephone, and a pot-belly stove in the corner.

At the time Forget-Me-Not was one of 11 historic buildings that formed part of the Waverley Cottage Collection of Colonial Accommodation, whether in the Oatlands area or in Hobart.

Each cottage is totally self-contained with everything that may be needed and can be found in the most appropriate places.

There may be more that have been resurrected by now. I hope there are.

It’s important to be aware that many of these country areas of Tasmania run on normal business hours and not those of major cities and tourist areas.

The fact that distances between towns is not always great means that not all services can be found there. Yet that, in a way, is part of its charm. The place untouched by tourists, a snapshot of the past. Discovering the rarely discovered.

Just because it is marked on a map doesn’t mean there is a service station selling fuel. You may have to drive on 20-40km for that.

And shops such as a supermarket, butcher or baker generally close about 5.30pm.

In Oatlands there is a petrol station, 24-hour medical centre, and an RV stopover area allowing for three nights free for travellers to rest on the shores of Lake Dulverton.

The town’s links with grain growing remains in the form of the Callington Mill, built in 1837 and as such is Australia’s only working 19th century windmill.

It is the producer of organic and stone-ground flours as well as being the centre of the town itself. As well as a distinctive landmark the mill and surrounding buildings give a sense of what early life was like.

Oatlands has the largest collection of sandstone Georgian buildings in Australia.

The Supreme Court House is one of the oldest in Australia.

Roche Hall opened in 1886 as a state school and is now used as the office for the Centre for Colonial Heritage Conservation.

Erected in 1832, the Kentish Hotel was originally known as the Inverary Castle.

The Lake Frederick Inn was built in 1833 by convict stonemason George Aitcheson.

On this night, with the fire in the pot-belly stove roaring to ward of the cold night air and a good meal, there was no better place for father and daughter to look back on the adventures of the first few days – the delights of Hobart, Norfolk Bay and the Tasman Peninsula, and the charm of the Huon Valley.

I think the hand-crafted timber boats at the Wooden Boat Centre at Franklin on the Huon River summed up the authentic feel of the region.

And so to sleep, warm but with the sound of the wind at the door and the leadlight feature windows. 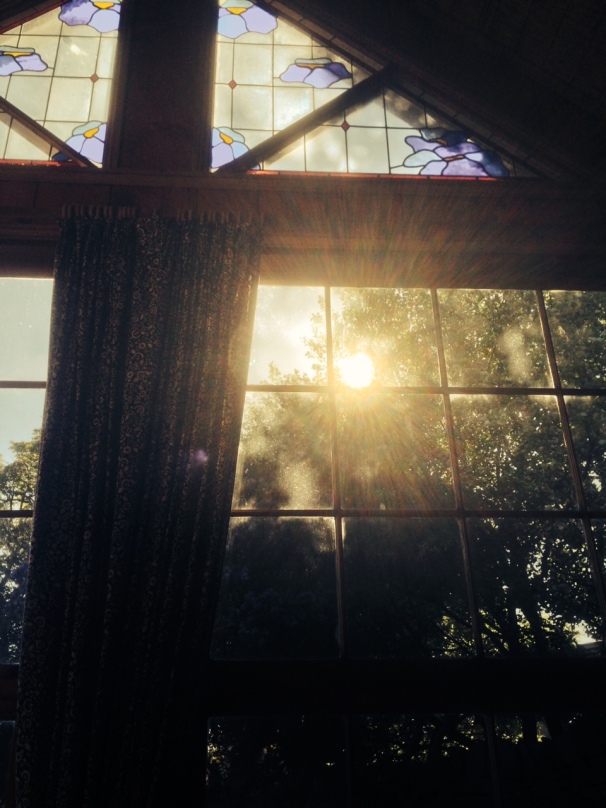 Yet not long afterwards my daughter stumbles downstairs.

“Dad, there’s someone outside. I can hear them.

“Maybe it’s a ghost from the Convict days or when it was a changing station for horses on the coach run. It could even be the spirit of a highwayman.’’

“It’s only the wind,’’ I try to reassure here. “We’ll be safe in here. And who would be out on a cold night like this.’’

And sleep we did.

Yet I woke early to get the fire blazing again to make sure the cottage was warm for breakfast.

I go outside for wood from the pile and there is frost on the ground.

The wind has stopped. It’s like we are frozen in time.

So I go for a walk to see what’s around. The crackling of the frosted grass underneath my steps.

The few head of sheep that had been grazing in the paddock next door were all sheltering against the wall of our cottage, keeping warm by getting out of the wind.

Right up against the wall of the bedroom.

Everything became clear in the light of day. The shuffling sheep were the sounds we heard that night. 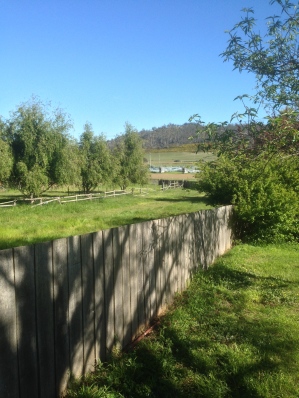 So after breakfast we explored the town, the sale yards, the church and the cemetery … like looking back at pages in a history book.

Then its time to pack the car and head north, the crumple of the tyres on the gravel driveway, past the wishing well and out to the highway.