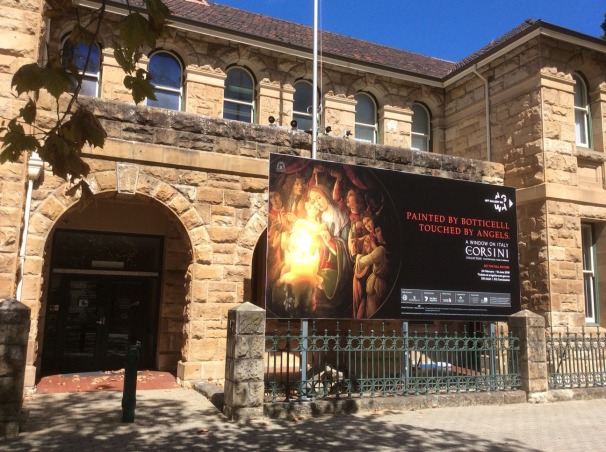 Two Exhibitions In The West That Cross Time, Distance

It was more by good luck than by good design. Yet a recent trip to Western Australia saw me visiting two remarkable but different art exhibitions.

Two distinctly opposite art galleries for that matter.

One was an established state institution, the Art Gallery of Western Australia. And among the notable works was a special exhibition of art treasures arranged through the generosity of the Corsini Family of Florence, Italy.

Perth is the only Australian city to host this collection, the first time in 500 years it has left the city it calls home.

The other gallery was a young upstart, a regional gallery in a mining town no less.

The Collie Art Gallery opened 2015 as a centre for art and artists and the first fit for purpose A-class gallery built since the expanded Art Gallery of Western Australia opened in 1979. 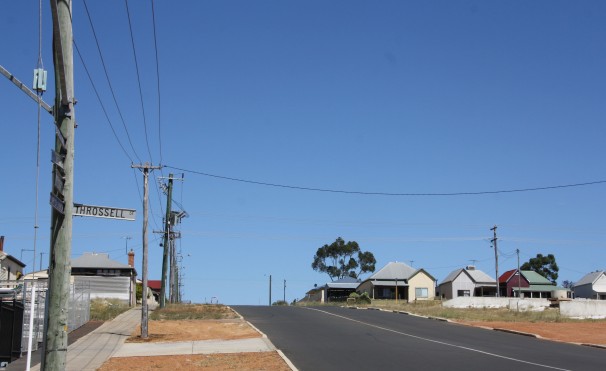 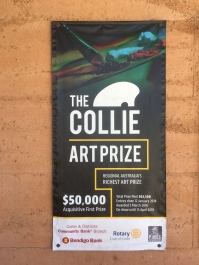 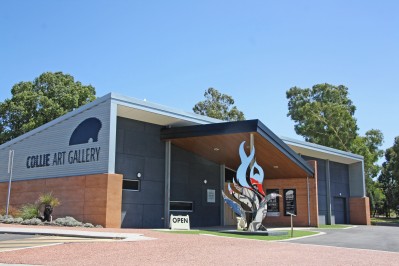 Here, in the raw landscape of the West’s only coal mining town, was an exhibition of finalists in the richest individual acquisitive art prize in regional Australia.

The inaugural Collie Art Prize of $50,000 was what attracted me to the town, about two hours drive south of Perth. No other reason.

Yet that is the beauty of travel. To be open to new ideas, new experiences.

The theme of the art prize was Identity, an invitation to artists to explore the age-old issues of identity and belonging that define who we are and how we relate to the world around us.

This is especially pertinent in Collie, a town undertaking a resurgence and revitalisation as the long-term changes in industry and business adapt to shifts and trends.

Collie had a bad rap due to the mining, and the culture built around fast cars.

The commitment of the community to turn that image around was shown by being named Australian Tidy Town in 2006. 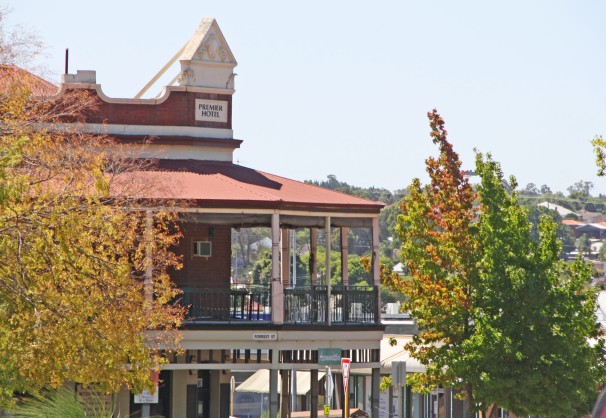 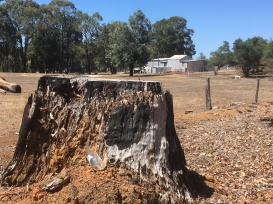 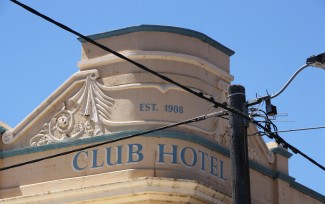 The gallery has helped get rid of that stigma of a dirty mining town. So has the outdoor sound stage in the heart of town, The Shell.

Otherwise Collie has an active hockey and cycling culture, and is on the Bibbulmun bush track … a 1000km walk from Albany to Perth.

The gallery is run by coordinator Payam Parishanzadeh with the support of a passionate committee and active volunteers.

The art prize includes two non-acquisitive $5000 awards as well as $1000 for a people’s choice award.

By offering such a large prize for a regional company they have sourced entries from Australia wide.

Accordingly, there was a variety of interpretations of identity from the more than 500 artists who entered.

The winner was Torres Strait artist Brian Robinson with a linocut titled By Virtue of This Act. 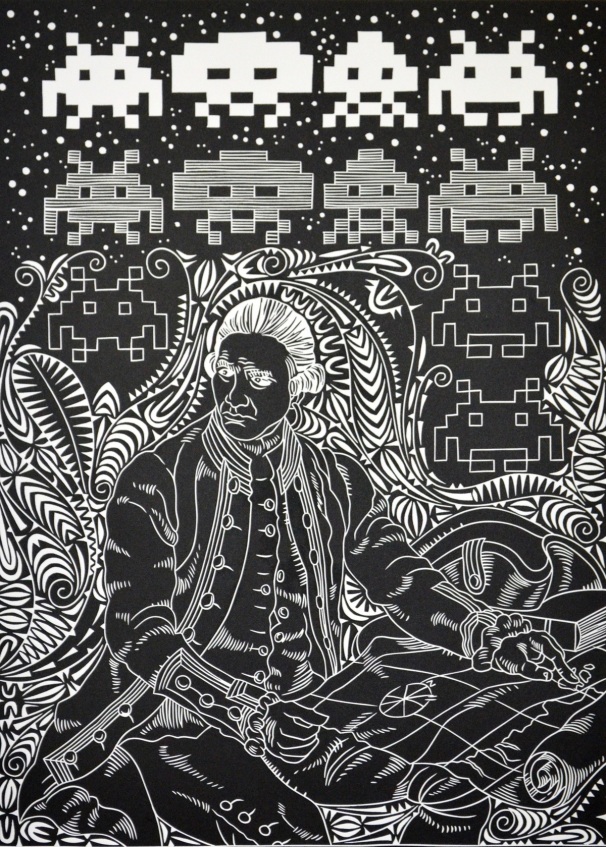 It illustrates the discovery of the islands and mainland of Australia in 1770 by then Lieutenant James Cook, , captain of HMB Endeavour, who claimed the east coast of the Australian continent for Britain at Possession Island.

Cook wrote: “By virtue of this act I hereby take possession of this land.”

Yet a contemporary element has been added in the way of Space Invaders imagery to reinforce the concept of invasion.

Collie is not just an art exhibition, it’s about selecting the best picture but at the same time ensuring the artist has a deep understanding why they have painted it and how they have expressed it. 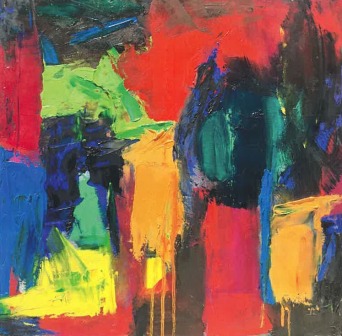 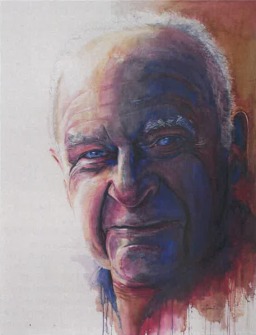 The diversity of the artists is shown in the finalists, such as the contrast between emerging artist Norah Murphy and her brightly coloured abstract inspired by the spirituality of the Murchison region in Western Australia, then you have a skilled water colourist Catherine Gartner doing a portrait of Banjo – The Old Shearer.

It explores the idea that in an ageing population the elderly are being revered less and less by society. Especially where their intrinsic work ethic, experience, knowledge, insight, traditions and deep sense of commitment can be under-valued.

One winner of the $5000 prize was Cotton Candy, a mixed media work by Collie artist Sarah Smith. 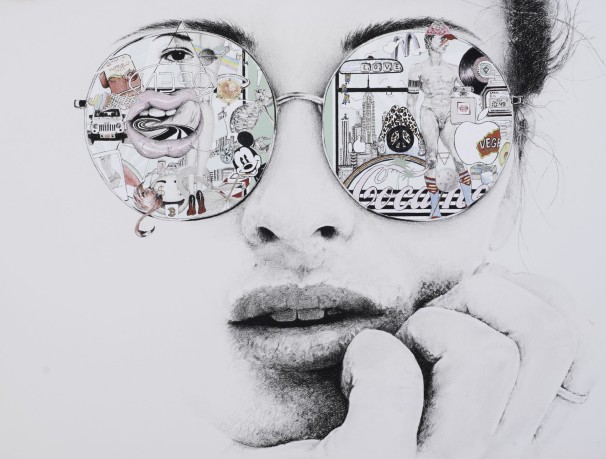 It’s a statement about entwining your life with an internet presence … the increasing obsession with looking good and in the meantime creating a self-obsessed persona.

The confusion of fact and fantasy, the pressure of perfection and the emptiness of expectation. Individual identity is being hushed in a haze of fluffy stuff. 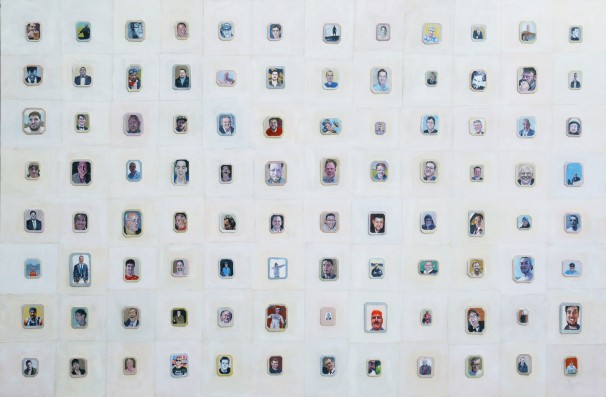 Again, inspired by social media the artist was trying to open his facebook page and found there were an alarming number of Alastair Taylor’s throughout the world. A sobering moment that made him realise what a small speck on the planet a person is.

For a small regional gallery the Collie Art Prize exhibition shows you could spend a lot of time immersing yourself in each painting. 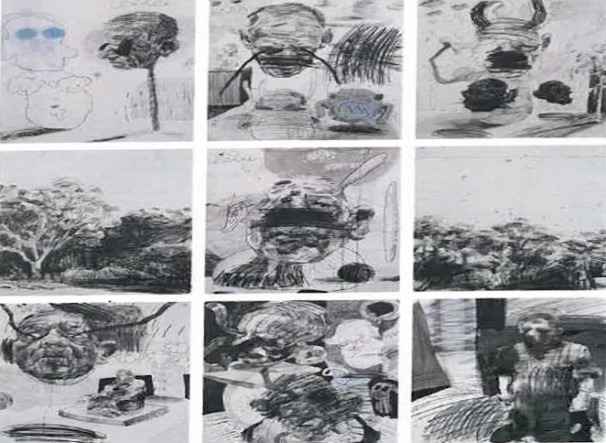 While some works were obvious as to their inspiration, this link is a lot less visable: Quilty had formed a working relationship with a fellow artist serving a life sentence in Western Australia’s main maximum security prison, Casuarina.

By using the modest tools available to prisoners, Quilty has used different media to show how dehumanised life behind bars can be.

Narratives related by friends, including police, prison officers, lawyers, mental health workers and prisoners show the entrenched lack of empathy in Australian society propagates a deeply flawed system. One that has been constructed to punish rather than rehabilitate.

A double-sided work by Suzanna Castleden titled On This Side of the World, shows the first light of day falling on her home town Fremantle while the reverse side of the image is of sunset falling on the other side of the world.

“It’s a work that uses light and darkness as a way of thinking about how we come to orientate and sense our place in the world.”

This year’s Collie Art Prize had a strong representation of people from different backgrounds and cultural origins, mirroring Australia in many ways.

A Portrait of an Industrial Migrant Landscape by Riste Andrievski, portrays how his father settled in the Illawarra region in search of a better life. His quest brought with it hardship, a development of a sense of community and the formation of a new identity.

Meanwhile Tanya Jaceglav’s Underground draws on her Collie mining history – in this instance, at the age of two, the death of her Slav father in an underground mining accident. 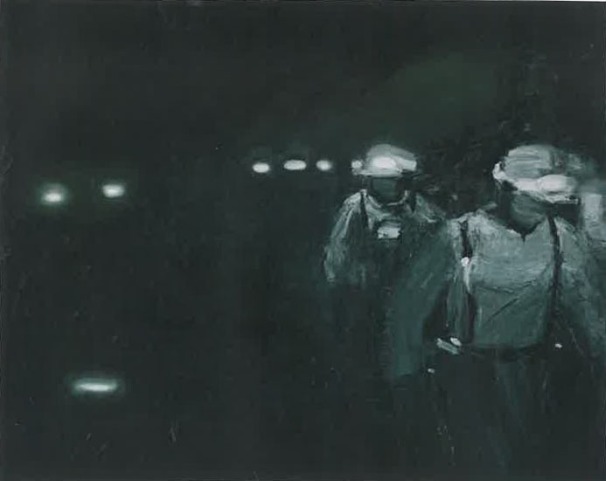 The artist says that understanding what forms our identity is an ongoing investigation. We are never in a single moment at any time … it is all fractured, never one … we are feeling a thousand feelings at once.

As for the Art Gallery of Western Australia, where better to take refuge from the burning midday sun.

Artworks, like people, survive better with moderate temperatures and lowish humidity. And that’s one reason I opted for tours within this imposing modern structure rather than the sand between my toes on Rottnest Island.

The gallery, founded in 1895, occupies a precinct of three heritage buildings on the south-eastern corner of the Perth Cultural Centre.

Included is the iconic Down On His Luck by Frederick McCubbin, while the new Six Seasons Gallery is named after the Noongar six seasons: Birak, Bunuru, Djeran, Makuru, Djilba and Kambarang.

The Whadjuk Noongar people are the traditional custodians of the land on which the Gallery stands and this new space is dedicated to the display and interpretation of Indigenous artwork from the Collection.

Currently, the Corsini Family of Florence, Italy, has permitted a wide selection of art treasures to be on exhibition in Perth. The only Australian city to host this collection, and here I was able to wander on a quiet day.

Getting up close and personal to Italian and other European masterpieces is impossible in Europe due to overcrowding of galleries.

A Window on Italy: The Corsini Collection, Masterpieces From Florence, is the private art collection of one of Florence’s most eminent families.

Featuring Renaissance and Baroque paintings by Italian artists such as Botticelli, Tintoretto, Caravaggio and Pontormo – these extraordinary works of art have been preserved over centuries, surviving the devastation of World War II and the great flood of Florence.

This personal collection includes portraits, landscapes, mythological and religious paintings, plus fascinating decorative objects and furniture from the Palazzo Corsini.

This collection is on show until June 18. It was just one of so many pleasant surprises at the gallery.

Another was a “free of charge” volunteer guided tour of the contemporary Australian collection. Names I knew well, paintings I’d never seen.

Indigenous art featured in another hall, varied and most interesting.

A sculpture depicting Maralinga atomic testing terrifying locals took my interest. Not that long ago in time, but unknown to many Australians.

Why isn’t that history part of our citizenship quiz I thought? 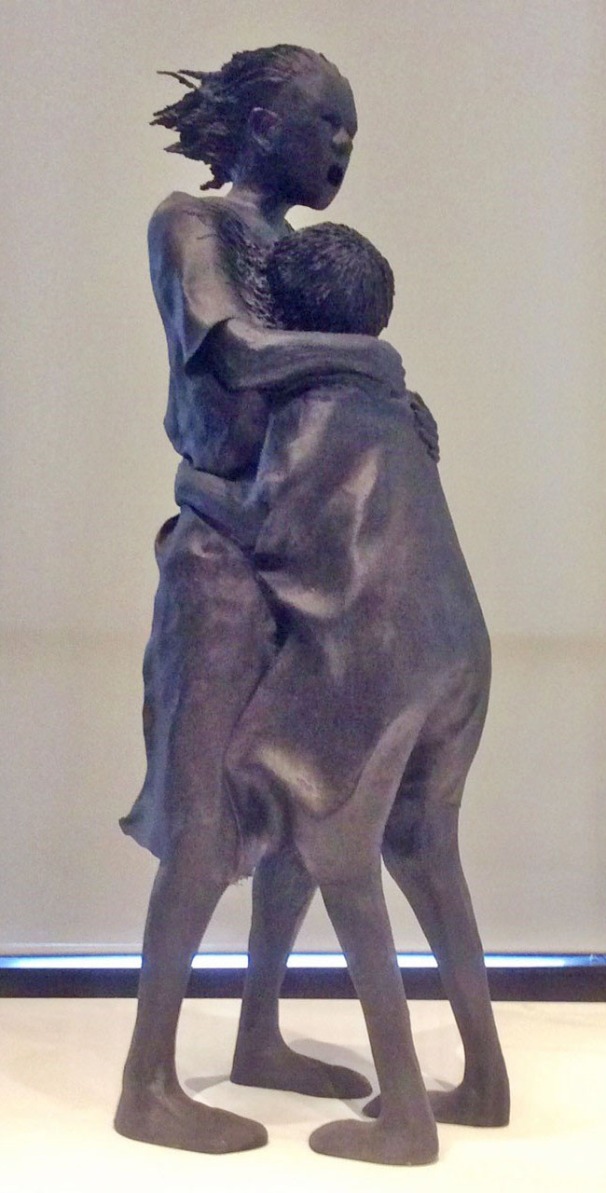