Stories from an ancient land 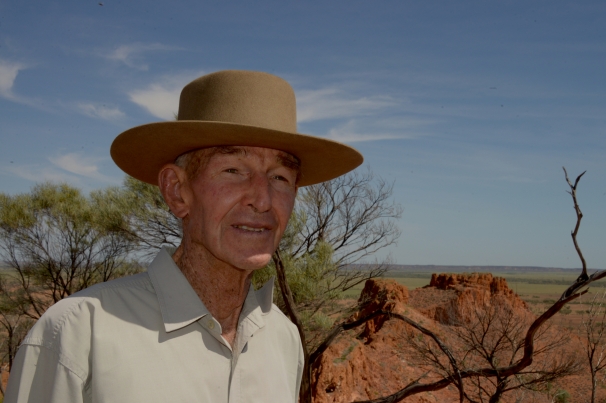 Tall, quietly spoken and as weather beaten as the land, 87-year-old Charlie Phillott had battled a lot of hardship in more than 50 years at Carisbrooke Station south west of Winton.

Good seasons as well as bad. Flood, fire and drought. Swings in sheep and cattle prices as well as foreign exchange variables.

Yet his biggest battle came from an unlikely direction. Australia’s banks.

The family had always kept the bank manager happy. But things changed.

Virtually overnight the bank forced the Phillotts into financial oblivion and they had to walk away from Carisbrooke.

The aggressive nature of the banks impacted on thousands of farmers and businesses across Australia.

But the bank didn’t count on the toughness of Charlie Phillott.

He took his fight all the way to the top of one of Australia’s largest financial institutions.

And the family is now back at Carisbrooke.

Yet on this day I am sharing a cup of tea and a piece of fruit cake with him at the Qantilda Museum in the main street of Winton. 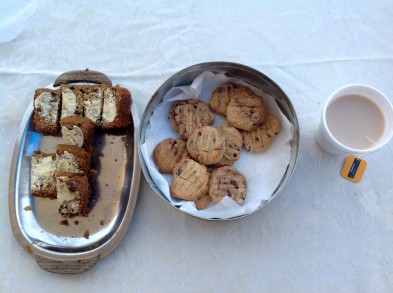 You know Australia is a big country but nothing quite prepares you for the distances between towns in the outback.

On a road trip to Darwin a couple of years ago and stopped at Winton for a coffee. The early winter’s day was fine and clear.

I wandered into the Waltzing Matilda Tourism and Information Centre and asked for some brochures.

Would you like to look around the centre, I was asked.

No, I just wanted to see what I should look for on the return trip. I would have more time then.

Two nights later in Darwin I heard on the news that the Waltzing Matilda centre had burned down.

Can you imagine what that meant to a community that prided itself so much on its history.

Not just the past 150 or so years as European civilisation found its way to these remote areas but the aboriginal people that stretched back thousands of years.

Then there is the natural history. The land itself that is part of the oldest continent.

A continent that once had a giant inland sea.

A place so ancient that dinosaurs roamed and trees stretched 30 metres skyward.

The road to Winton from Longreach

This year I had the opportunity to return to Winton.

Sitting at the Qantilda Museum next to the razed site of the Waltzing Matilda Centre.

Standing there in the shade of the morning sunlight, you are taken by the country hospitality as much as the history of the region.

The way communities come together … fortunately not all of the Waltzing Matilda Centre was lost and there are ambitious plans to have a new centre built in 2017.

It’s a similar story of renewal for the land which is just coming out of severe drought with good follow-up rains after no significant falls in more than four years.

John McKinlay came through the area in 1862, while searching for the Burke and Wills expedition.

They were following the banks of the Diamantina River which is part of the Lake Eyre catchment and forms more than one sixth of Australia’s land mass.

William Landsborough also passed through in 1866 and described the land as well grassed in season but stocking it could be difficult through lack of surface water.

The first sheep arrived at the Doveridge run in mid-1874 and Winton had about two million sheep in the early 1900s.

The region was built on the back of the sheep, but that has cut back dramatically in recent years and there are nowhere near as many people on the land as back in those heady days.

More moved into cattle yet in drought conditions cattle are the first to be destocked.

Elderslie Station, originally Wallace’s Waterhole, then became Pelican Waterhole as many stock routes converged there. The ridgeline became the town of Winton.

Banjo Paterson was thought to have worked at Elderslie as a jackaroo or storekeeper in 1895, at about the time he wrote Waltzing Matilda while visiting nearby Dagworth Station.

The North Gregory Hotel in Winton became known for the first public singing of Waltzing Matilda.

Yet it was also where former US President Lyndon Baines Johnson is said to have slept during World War Two.

LBJ was aboard a Flying Fortress bomber that force landed in 1942. The plane was on the way from Darwin-Cloncurry.

It was the largest plane at its time and landed on a claypan. 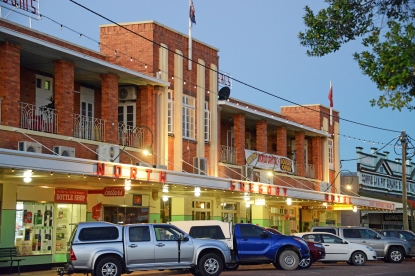 The North Gregory Hotel in Winton is where Waltzing Matilda was performed for the first time in public in 1895. Photo: John Elliott

The main reason for my visit to Winton this time is to see Lark Quarry, site of the largest collection of dinosaur footprints in the world.

On the drive out there Charlie continues to tell me about this land.

The Mitchell grass, that underpins Australian grazing, has responded quickly to the rain.

“It’s one of most interesting in the world,’’ Charlie says, “a summer grass.

“If it does not get rain then it doesn’t develop to its true potential… If it gets follow up it can remain nutritious for long times.’’

Extended drought can decimate it. A single root goes into the subsoil and that is what keeps it alive for many years. But what happened was the rainfall patterns changed and we did not get the monsoonal rain but got monsoonal storms that sealed the surface and didn’t allow the rain to seep down.

It takes quite a long time to regenerate or reseed so properties need to be destocked to allow it to seed. Kangaroo plagues can make it difficult to get it into seed before it re-establishes.

Claypans are not necessarily bad property management, they were there before farming and have more to do with watercourses.

You find coolabah trees on water courses and they are extremely hardy, will withstand drought longer than anything else.

Travelling through the Bladensburg National Park, Charlie tells me gidgee scrub is encroaching onto grasslands at an alarming rate.

Challenges, the resilience and enthusiasm is there to rebuild and get on with things, that’s country folk.

When Charlie shows us Carisbrooke after driving through tablelands of mulga and spinnifex, it’s like looking back in time. Miles and miles of beautiful grass in a valley fringed by the most magnificent landscape of red cliffs and mesas.

You imagine how the early explorers felt when they came upon this … truly a vision splendid.

Into this landscape came a Cork Station ringer who found some unusual tracks found embedded in rocks at Happy Valley Station.

The first imprint was not much bigger than a bird. It was taken to Brisbane and had it identified.

Yet the most exciting find was yet to come. It was at Seymour Quarry and came about by accident while looking for opals.

Instead they found the tracks of pre-historic mammals and dinosaurs.

Scientists followed the gullies and luckily found the stampede. A track wave of 3300 prints.

The most concentrated site in the world.

All to the north of the site was a massive forest with lush green under-storey and 30m-tall conifers.

The Lark Quarry site was a land bridge into the creeks to the west. 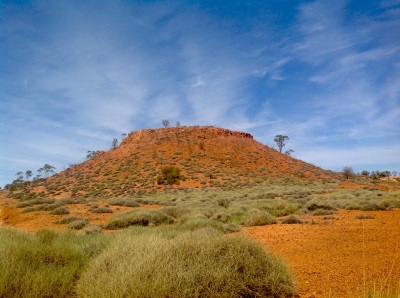 The tracks were formed 95 million years ago when a herd of 150 small two-legged dinosaurs – theropods and ornithopods – look to have been disturbed by a large carnivorous theropod.

Normally animals in the wild are similar but here it’s mixed, so make of it as you will.

What happened next was a freak of nature. Wet sand covered tracks within a few days effectively preserving the site.

After millions of years it became rock and like grease-proof paper was able to be flicked off the top revealing perfectly preserved prints.

The vastness of what we had witnessed here kept swirling around in my mind on the drive back into Winton.

I thought people who kept saying we are the lucky country were overdoing it, but we really are, and the most beautiful landscape.

You are continually surprised by how vast the landscape is. And the sunsets, the night skies. Just walk outside and see all the stars.

The landscape at Middleton where the movie Goldstone was shot. Photo: John Elliott