Legacy of the Outback

Australian Stockman’s Hall of Fame: A lasting memory to the pioneers of the bush

Not everyone gets the chance to pass on some history of the nation. Yet that’s just what Australian Stockman’s Hall of Fame CEO Lloyd Mills gets to do every day.

The former Caloundra RSL business manager considers it a privilege to be able to help pay a tribute to the pioneers of the outback and pass that legacy on to the coming generations.

“Australians understand that the bush built the city,’’ Lloyd tells me as we walk through the landmark at the eastern entry to Longreach.

“Everyone carries a bit of bush in them. It’s a matter of bringing that out in them.’’

After 22 years at Caloundra on the Sunshine Coast, Lloyd moved to Outback Queensland Tourism as general manager and after two years in that role the CEO position at the Hall of Fame came up.

He asked the family what they wanted to do: Stay in Longreach or move back to Caloundra?

They knew it would be for three to five years. But as Lloyd says, the answer was easy considering their youngest child had been in Outback Queensland longer than he was at Caloundra.

Lloyd’s biggest change in the move from coast to country was leaving friends, especially after surfing for 35 years. Yet the beauty is a barbecue of a Sunday.

“There is not much chance of being rained out,’’ he says with a grin. “Professionally, one of greatest business challenges is that nothing is quick, nothing is easy in the bush.’’

Yet Lloyd reflects that it is a bit like life.

“You need to be very resourceful. I could rely on the internet on the coast, it was not a problem.

“Here, it can be the way you do business that is different. It’s definitely not 9-5 Monday to Friday.’’

In that regard, Lloyd believes he has brought with him an understanding of people in the city.

“It’s a great advantage knowing how they think … it’s a way of getting people out here.

“They come from all over … from Brisbane, Sydney, Melbourne. The most exciting part is the numbers of families coming out.’’

The Royal Flying Doctor Service is one of the largest and most comprehensive aeromedical organisations in the world. With a waiting room of 7.13 million square kilometres it has played a dramatic role in the history of the Australian Outback since starting in 1928 through the efforts of Reverend John Flynn

Since its opening in 1988, the Hall of Fame has played host to over one million interstate and international visitors.

Saying that, the numbers of forward bookings is the best in 10 years. And the outback towns can do with that sort of economic boost as they battle drought as well as everyday issues.

Lloyd has travelled to some great places but finds people are asking do they really want to go overseas at the moment, that they want to see Australia.

“The thing about out here is it is not as manufactured as some other places. You are dealing with real people, real life issues.’’

The past summer saw a kick in numbers when Queensland Rail implemented a two-for-one rail deal: Two tickets for the price of one.

And in the outback, where you get used to the unexpected, Lloyd says without hesitation the most unusual thing he has seen was a German traveller with his worldly goods in a wheelie bin, and he was 350km down the Birdsville Track. 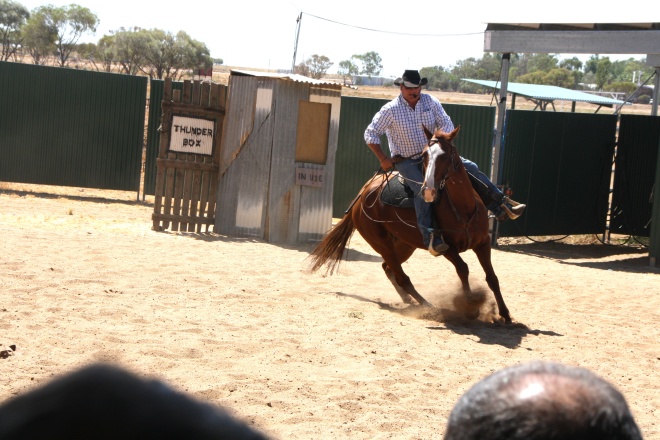 Yet the grey nomad market is very strong throughout the outback, Lloyd says, with the demand for camper trailers enormous.

“People are wanting an earthy experience, and the confidence increased tourism will bring to the outback is going to grow.’’

The school subsidy of $130 for Queensland students to experience the bush has been a great initiative. Tourism Events Queensland has worked with all governments on that policy.

It enables Queensland students to visit Canberra and see the centre of government as well as other national institutions but Lloyd believes it is also important for them to see country Australia.

“The subsidy has survived three changes of government so that is good to see. It is growing every year.

“In Outback Queensland the students will do the Hall of Fame, Qantas Founders Museum and see the dinosaurs at Winton. Those kids are saying to mum and dad, ‘you’ve got to go’.”

The day we visited there was a secondary school tour group from Wollongong, NSW. They were travelling to Winton then into the Northern Territory and out to Uluru.

I took the chance to remind three or four of what a school teacher had once told me.

Any child interested in dinosaurs and the universe will have a bright future.

Stockmen have been part of Australia’s landscape since the early 1800s when the Blue Mountains west of Sydney was crossed, opening up the vast tracts of grazing land. Their role has been a hard one, battling all the vagaries of nature – from fire and drought to flooding rains

For Lloyd Mills the greatest surprise in his move to the country has been the acceptance.

“When you come into a town with generations of families, you expect some hesitation. But we have been busier socially than ever.’’

While Longreach has traditional industry and agri business, the Stockman’s Hall of Fame is the big attraction.

“It’s an exciting place to be in tourism. There is a lot to look forward to.

“The core assets are there. We need a few more events to hold them. It’s time to put some more (visitor) packages together without creating competition between businesses.

Since its opening in 1988, it has played host to over one million interstate and international visitors.

“There is a lot to be said about the initial vision of the Hall of Fame in filling a niche.

“We can hold corporate events, people can muster cattle … things you cannot do in the city.

“Then there’s the pride that it’s created an industry.

“There was no tourism to speak of in Outback Queensland before the Hall of Farm and now it is still running 28 years later.

“When it does rain it will be good days are here again.’’

Since its opening in 1988, it has played host to over one million interstate and international visitors.

The museum, constructed from timber, stone and corrugated iron, is truly reminiscent of the outback.

Inside, the Centre’s five themed galleries display the history behind some of Australia’s greatest and bravest explorers, stock workers, pastoralist, and Aborigines.

The story behind the Hall of Fame started in 1974 when artist and former stockman Hugh Sawrey dreamt of creating a grand tribute to the unsung heroes of remote Australia.

This dream was shared by other outstanding Australians, including the legendary R.M.Williams.

Longreach was chosen as the location because of its historical role as a stock route junction and its current transport links.

Watching the working stock horse and sheep dog show at the Australian Stockman’s Hall of Fame at Longreach, Queensland