Back Roads of My Mind

A road trip really only starts once you turn off the highways.

Only by getting away from the day-to-day do you really discover the important things.

It was a trip into my past, down roads I had been along throughout my life but also to find a bridge to the future.

That’s what road trips are about. This time it was to drive down to Melbourne to catch up with a mate from half a lifetime ago.

He was struggling with cancer and a group of friends and former colleagues in the bank had arranged a lunch for him. Could I come? It’s on Monday.

Monday? This was Thursday and I’m in Queensland. Of course, I will.

On the way I would see my youngest brother at Pt Stephens, just north of Newcastle.

Two bags filled with T-shirts, shorts and jeans. A cooler bag with some drinks, sandwiches and fruit to have along the way. More than 1700km down Australia’s east coast.

My daughter gives me a notebook to read in those quieter moments.

The Open Road. From Daughter to Father.

“Things I’ve learnt,’’ she writes. “Things you’ve taught me. Things we both wish we knew …’’

Getting through Brisbane needs good timing. Too late in the afternoon and you’re caught up in the crush.

The Tugun Tunnel gets you past Coolangatta and into the Tweed Valley with Mt Warning standing out in the distance, just like when Captain Cook sailed up the east coast in the 1770s.

“Not always on this particular road, but somewhere.

“There will never be a point in my lifetime when all the highways are fixed.’’

This meets me head on as I make the drop down the range into Brunswick Heads. Straightening of the highway, by-passing towns and sharp bends, making the road safer by duplicating it into two lanes each way.

Such has been the road improvement in south-east Queensland and northern New South Wales that it is possible to drive from the Sunshine Coast to Byron Bay in about three hours. Past avocado orchards, past row upon row of macadamia trees.

Past Hambly Lane and Emigrant Creek. Past a food van advertised for sale. Watch little dramas unfold on the roadside as a mother makes calls on a mobile phone beside a car that has broken down while on the school run.

How will it affect the day of those involved?

More roadworks as I enter Ballina. The grey skies have turned to soft rain and I play Melbourne by The Whitlams on the CD.

Deadmans Creek Road … ahh, the names are so colourful. Into caneland and watch for speed cameras, especially careful at the sugar mill towns and where there are school speed zones in places such as at Broadwater.

Slowly past the faded signs on the shops. She-oaks line the road, the breeze whispering through the fine strands of leaves.

Then the towering steel structure of the Harwood Bridge looms into sight and across the Big River, the Clarence. It’s a river that has run through the history of our family.

That is the Miles Davis quote my daughter has stuck in her book. So I put a Davis CD on and let the kilometres eat themselves up.

The distinctive sight of the Grafton road and rail bridge appears on the right … road over, rail under.

“Warning: Log trucks entering,’’ one sign reads as I drive south through state forest. “The Lord’s return is near’’, is written on another.

The Creek truck stop is lit up like a lighthouse. Trucks everywhere.

It’s about the half-way point between Brisbane and Sydney.

Most popular with truckies is lambs fry and bacon or schnitzel, the woman behind the counter tells me, but if they have time they go for mixed grill or a T-bone.

Driving through the night. The full moon glides through the sky, reflected on the ocean and sometimes cloaked in cloud as I near Coffs Harbour.

It’s the first set of traffic lights since the Sunshine Coast. What‘s that, 700km?

Plenty of transport’s on the road at night but I turn off the highway and find a spot to pull over for the night, in the hills at Coramba where my grandma was born.

The next morning I follow the Nambucca River and soon see the Midco Milk Co-operative at Macksville that has fallen into disrepair.

The familiar sight of the Star Hotel on the opposite river bank.

Around the corner is the Nambucca Hotel and a sign on the wall telling how Slim Dusty penned one of his songs in the bar.

Driving through the hills above Kempsey. Smoke from the chimney of a farm house curls through the gum trees. Strains of the ABC news coming through on the radio.

It’s like time has stood still in the Australian landscape. We could be anywhere in time. In my grandfather’s time, in my father’s time, at any time in my own life.

“The worst cafes have the best food’’ … it’s another line from my daughter’s book.

Soon, I am winding my way along the creek towards Scotts Head. A beautiful beach and small town about 14km off the highway.

A rocky headland and a wide crescent-shaped sand beach stretching north. The caravan park is right on the beachfront and the bowling club is not far away … perfect for dinner and a go on the pokies.

Pushing on along the coast to Green Head, past exclusive retreats and memories of broken dreams – abandoned caravans and tumbled-down houses where people were going to lead a self-sustainable lifestyle.

Driving though the rich dairy and agricultural land around Kempsey, past Fredo’s famous pie shop at Frederikton.

A thought pops into my head: Never be complacent. Always look forward to new challenges. If you are concerned about that just ask someone who has survived a car crash, cancer or a heart attack.

What I notice about New South Wales roads is not just the amount of work that is being done on them but the way the traffic flows. You are not held up behind the transports, especially on hills.

Just before Raymond Terrace I pull off towards Port Stephens and catch up with my brother. He is sanding back a motor boat in his back yard, doing it up for family fishing days on the magnificent stretch of water that was once considered as a possible alternative to Port Jackson for Australia’s first settlement.

The drive into Sydney marks a change of pace. Along the F3 and over the Hawkesbury River then into Hornsby.

Turn left and follow the Highway 1 sign but I cannot find Route 7. Traffic is heavy for this late on a Saturday morning.

Check the map. Missed the turn. No, I turned the wrong way.

“Getting lost is just another adventure,’’ my daughter has written.

Getting lost allows me to find a new way through Sydney. One I hadn’t been on before.

Eventually I find the new tollway out past Blacktown and Liverpool.

You save at least 30 minutes as it winds through Eastern Creek and past Campbelltown.

The kilometres ease by. The roads are beautiful. Everyone travels at roughly the same speed.

You just glide through the countryside but are not connected to it.

The road is even. The hills and the bends have been taken out of it. Instead it is just gradual curves and slight inclines.

Pull off the highway near Goulburn for coffee and a sandwich at a servo. I try to get some fresh cherries from a roadside fruit truck.

“What do YOU want?’’ comes the aggressive greeting. “Cherries,’’ I say.

Oh, out of season I guess.

So I drive on for a while longer but the afternoon sun coming through the windscreen is too much and I pull over for a nap. I text my daughter: Remind me again why I’m doing this.

Bob is such a nice guy and was a good friend when we worked together.

It’s such a pity he is battling this illness.

And there are the other boys to catch up with. I am so lucky to have been able to do this trip.

Push the seat back, the window down, the radio on softly and within minutes I am asleep.

Through Albury and the big decision is where to pull up for a meal. Towns from the past. Beechworth, Rutherglen, Chiltern or push on to Glenrowan.

Beechworth wins. There is a singer-guitarist in the bar of the Commercial Hotel. Good craft beer on tap, great pizza from the kitchen across the road.

I’m going to find a spot near the river and sleep here for the night.

The stars are right down to the horizon as there are no city lights to give that glow. The air is crisp and clear.

The secret of life is to be content and sleep comes easily.

The beauty of being an early riser is you get that time of day before the world wakes up.

Have a nice hot shower at petrol stop just out of Glenrowan and driving towards the town I look to the east and see a magnificent sunrise over Mt Buffalo.

Maybe this time I will look for the old Kelly house at Greta. It’s taken me half a lifetime and more to get to this point.

I’m on the road to Moyhu but not having much luck, so take a gravel road to the right.

Have breakfast of muesli on the side of the road at Kelly’s Gap near Glenrowan. Beautiful sunrise over the highlands. Listening to Macca of a Sunday on ABC Radio, magpies cordling in the background.

Soon I come across Sudholz Road. Could it be the right road after all? There it is. The old brick chimney of the Kelly hut.

Take in the idea of being here and all the words written about the impact Ned Kelly has had on Australia.

Next I am driving through Benalla and Alexandra, heading for Healesville through little dots on the map sometimes no more than a hall, a school, sports ground and tennis court.

Swanpool, Lima South and Barjag, Maindample and Bonnie Doon on the shores of Lake Eildon.

Yes, that Bonnie Doon made famous in the Australian movie The Castle.

Pull up on the side of the road at Sheep Dip Creek for a 20-minute sleep in the car before driving down through Yea to Yarra Glen. 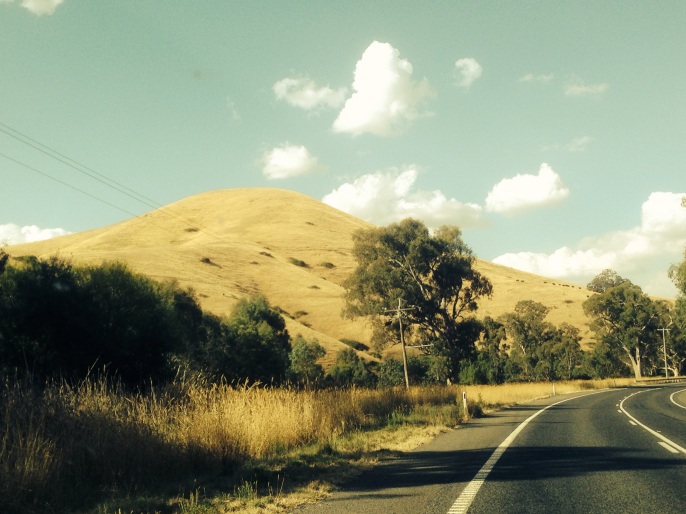 The town centres of Croydon, Lilydale and Ringwood are fading as new plazas open up.

Mitcham. Vermont. How many years ago has it been?

I park the car outside the lunch venue and collect my thoughts.

How life turns out. Here are so many people from an early part of my life.

I love those words about the importance of now. I’ve travelled too far in life to have regrets. 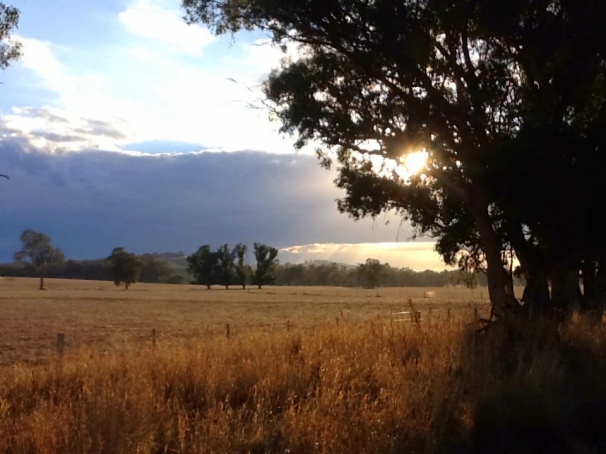