The Streets of Rome

Seeing Things In A Different Light ROME is like a favourite old fisherman’s jersey that you love to pull on. It wraps itself around you. Comfortable, keeps you warm, and you feel secure in its company. So it is with Rome. So much tradition yet such a part of today. The view from the hotel […]

Seeing Things In A Different Light

ROME is like a favourite old fisherman’s jersey that you love to pull on.

It wraps itself around you. Comfortable, keeps you warm, and you feel secure in its company.

So it is with Rome. So much tradition yet such a part of today.

The view from the hotel room at 3.30am is peaceful, quiet.

Not the Rome that we are told about – the city that never sleeps. 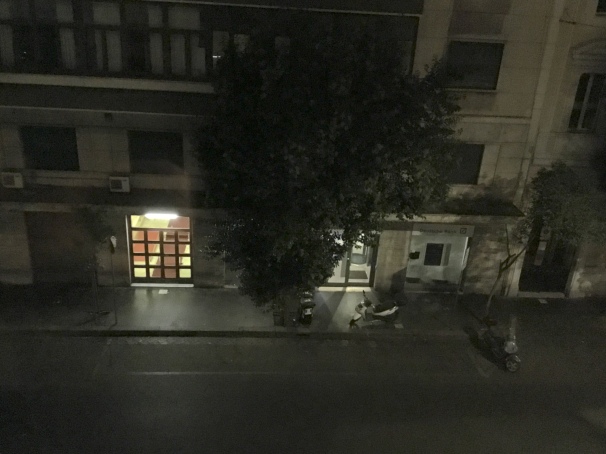 There’s a soft almost dull greyness from the street lights. The shadows of the trees lining Via Cicerone give a ghostly appearance.

Then there’s the darkness of the laneways that run off the street. What lies down them?

My body clock says it’s midday, and is ready for a walk. This is even though it’s still the early hours before dawn.

It’s due to the jet-lag of the 20-hour flight the day before.

That and the frenetic planning going on inside my head of what to see first in this precious city.

How to prepare for the day? What streets to walk down? How to get a better understanding of this place, and the people who live here?

Well, let’s just step out and see what happens.

Buongiorno, is the greeting from the night manager at the desk as I slip out of the revolving door to the street.

Buongiorno … it’s something that resonates everywhere. And it is said with feeling, not flippantly. 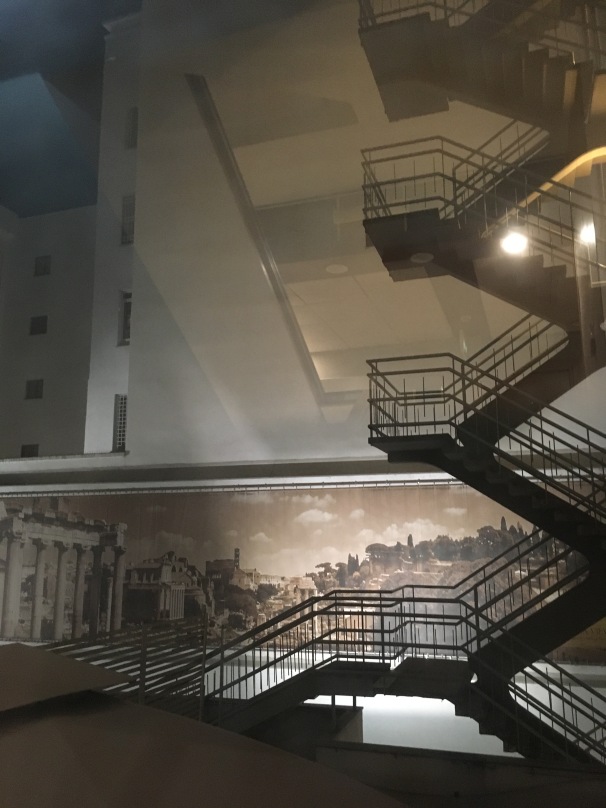 My plan is to walk to the Colosseum and get some night photos of this iconic stadium. Maybe see some other significant sites along the way – the ancient Baths of Caracella perhaps, the largest surviving ruins of an ancient bath complex in Rome.

An hour to walk out, some time at the Colosseum and an hour back.

That way I’ll be in time for breakfast and then the organised walking tour of the Vatican at 10am.

The Sunshine Coast Oriana Choir is on a music tour of Italy, singing at a series of cathedrals from Rome to Venice over the next 16 days. Tonight there is a rehearsal at a beautiful church around the corner. That is at 5pm as the next night the choir will participate in mass at St Peter’s Basilica.

So that was the loose plan while setting out towards the Tiber River on this morning in late September.

Rome is a place where you are easily taken by the sights, the sounds and the smells of the city as it stirs – especially the smell of the coffee. 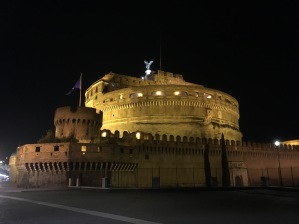 There’s not many people around at this time of day. It’s a time of rejuvenation for the city.

Past the Piazza Cavour with its lawns, and the imposing Supreme Court.

An early morning jogger is one of the few at the Bridge of Sant Angelo, and there are city buses but with few workers on at this time.

For a moment I wonder what I’m doing walking near-deserted streets in this city.

Yet these are morning people who pass by, not night hawks.

And there’s so much to see, even in this darkness of what is basically the dead of night. 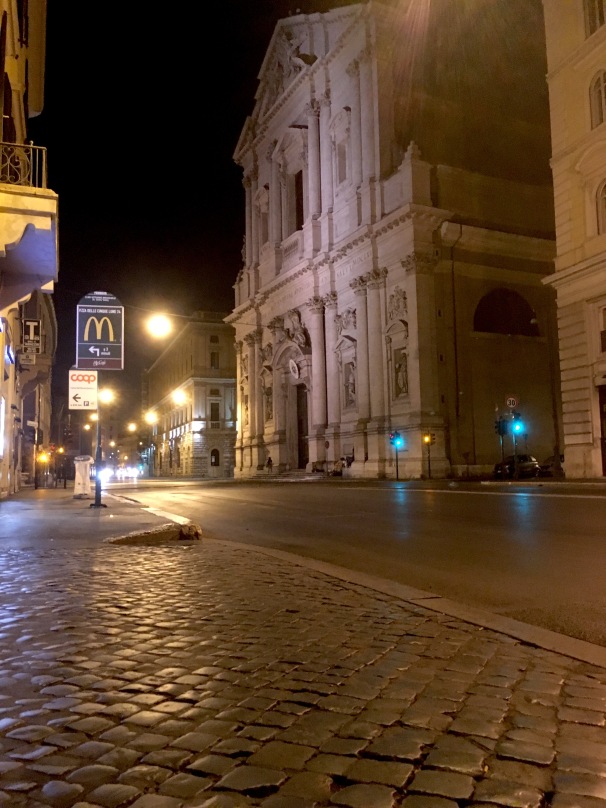 The Google maps on the mobile phone are better to read in this light than the fold-up map in my pocket.

I come across the expansive Piazza Venizia, knowing it holds the key to me finding the Colosseum. On the higher corner is the imposing Monumento a Vittorio Emanuele II, built in white marble to honour the first Italian King Victor Emmanuel II.

This massive shrine also serves as a tomb for the Unknown Soldier (Altare della Patria).

This National Monument is nicknamed ‘the typewriter’ or ‘the wedding cake’ by the Romans. Apparently you can access the mid level and get good views across the Forum site.

Then I am walking up Via dei Fori Imperialli. A grand sounding name for what is a grand thoroughfare.

Built during the dictatorship of Benito Mussolini, today it is very pedestrian friendly as well the route for regular bus services. And there is an underground metro railway that takes you right to the Colosseum.

The road goes over parts of the Forum of Trajan, Forum of Augustus and Forum of Nerva, parts of which can be seen on both sides of the road.

There they were, in the half-light just before sunrise. Sentinels of time. 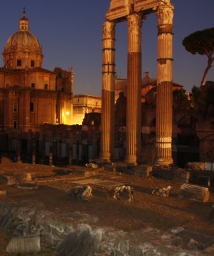 Columns and arches rising out of the rubble of 2000 and more years.

In recent years there has been a great deal of archeological excavation on both sides of the road, while significant Imperial Roman structures are still under it.

I stop and talk to another photographer, who tells me the light will be good in 5-10 minutes.

Light? I want dark so that the Colosseum will look dramatic from the floodlighting.

Yet when I get there the faint glow in the sky tells me what he is talking about – the colours of the day falling on this remarkable landmark.

It’s right there in front of you. Surrounded by both modern and Ancient Rome. 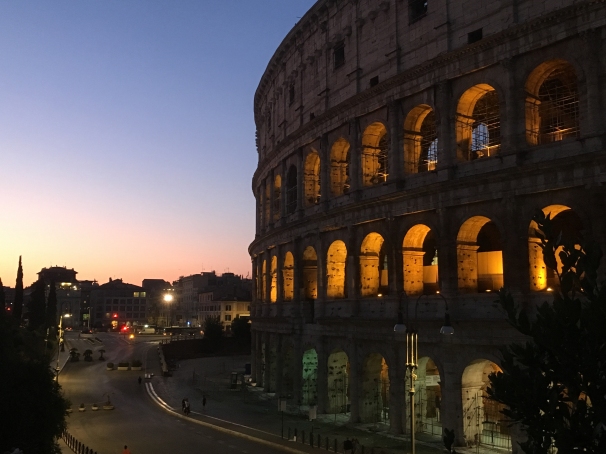 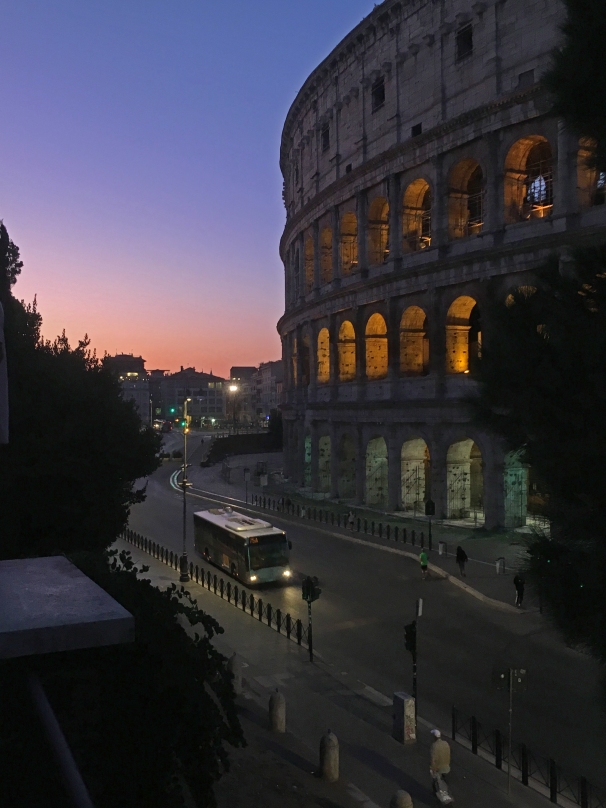 The best modern-day example I can think of is the Melbourne Cricket Ground, an imposing stadium within walking distance of the central business district.

I talk with a New Zealander who is there to take photos, and as we are both from the Southern Hemisphere try to get our bearings as to north-south directions in relation to the rising sun.

Then I chat with a group of three teenage boys.

They live in the city and are taking selfies on their phones, with the Colosseum as a backdrop.

I take one of the trio … and then one of myself. It’s a reminder of all those history lessons many years ago at a country school half-way across the world in Australia. 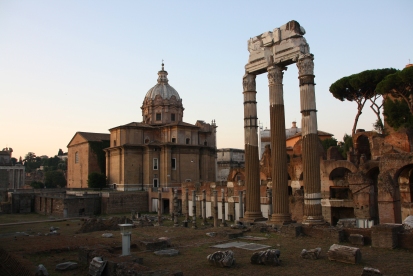 On the walk back to the hotel it is interesting to see the ancient sites in a different light. 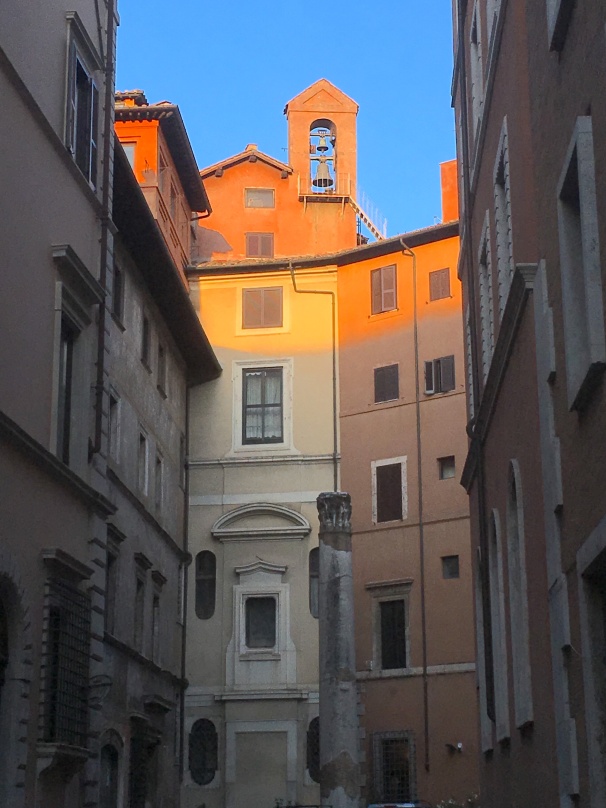 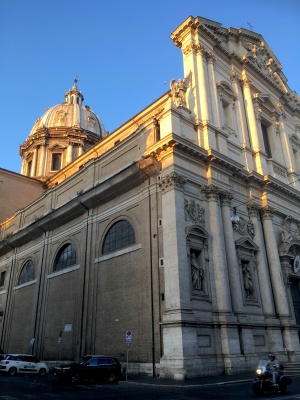 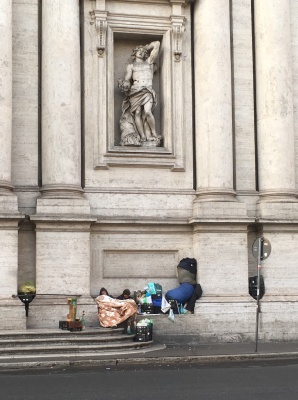 Looking to find the Piazza Navona, and explore it in the soft colours of dawn, I ask a female soldier on guard at a government building.

In an instant she has given me a valuable lesson in Italian etiquette.

It is a true greeting. An acknowledgement of who you are.

Good morning. I hope that you are well.