Mention Carnarvon Gorge and most people will tell you they would love to go there. But they haven’t.

It’s so near to Brisbane and other major population centres of South east Queensland yet far enough to leave it for another time.

That’s how I have thought about it for so many years.

When you consider the enormous size of Australia, Carnarvon National Park is in our backyard, so to speak.

Yet we put it off in favour of travelling further afield – interstate or overseas.

About 8-9 hours drive north-west from Brisbane or the Sunshine Coast, Carnarvon is near enough to visit of a weekend. Yet allow yourself much longer to fully understand and appreciate the wonders of this amazing natural formation.

The roof of Queensland they call it. The range of mountains are so vast and diverse.

The rain that falls here gives rise to some important rivers and streams. Five major river systems rise within the park’s boundary: the Comet, Dawson, Maranoa, Nogoa, and Warrego.

Such is the geography of the range that it virtually creates its own climate.

A fellow hiker put a visit to the national park into perspective. He had been driving down the Carnarvon Highway for 30-something years with his work, and thought it was time to turn off and have a look. 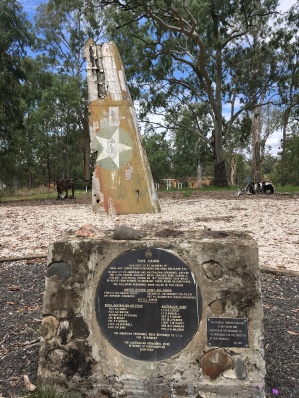 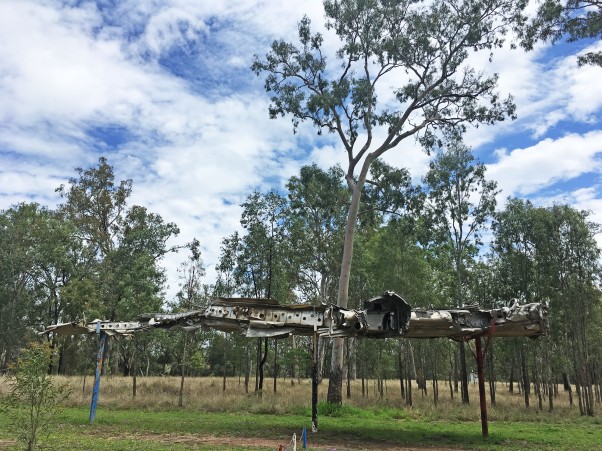 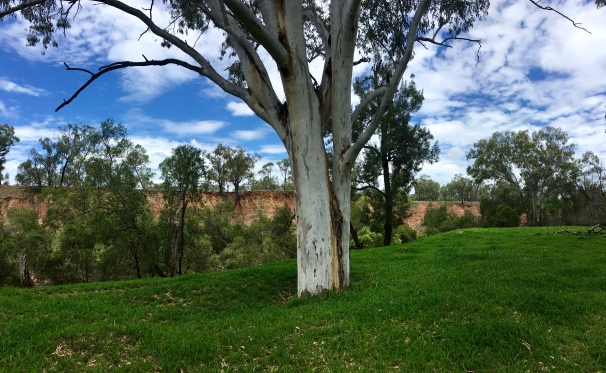 The road is sealed the 40km or so from the highway into the national park yet there are two creek crossings that are prone to flooding after heavy rain. At Rewan there is the wreckage of a US Air Force plane from World War II.

Arriving in late afternoon it was beautiful to see the cloud hanging majestically around the imposing sandstone cliffs … much like you see in the New Guinea Highlands.

It added to the mystery that surrounds the gorge, said to be where there are still trees and plants dating back to the age of dinosaurs.

A good introduction to the national park is to attend the 4.30pm briefing at the Wilderness Lodge Discovery Centre.

It was arranged that I join Michelle Whitehouse of Australian Nature Guides as part of the guided hike up the gorge the next morning – 7.30am start from the Rangers Centre near the creek.

The tour takes you up the lower gorge to the Ampitheatre, Ward’s Canyon, the Art Gallery and the Moss Garden.

It’s the diverse nature of Carnarvon that appeals so much.

The gorge is beautiful in its own right but those creeks and gullies off to the side hold some real surprises.

As we walk, the soft early-morning mist swirls around the cliff faces and the moisture drips from the trees.

The wildlife is incredible. Wallabies and kangaroos feeding on the new shoots of grass beside the walking track.

They are not disturbed by our approach. They treat us as if it was the dawn of time and there is no need to be worried about our intrusion into their domain.

You could see where the echidnas had been digging in the dirt for ants. Apparently they sense the movement of the ants and listen for them.

The rock formations are stunning. So weathered and pitted. The trees reaching up towards the sky.

The bird calls, the parrots darting through the trees.

As we walk Michelle tells me a major factor of the national park is the geology.

Three river catchments interact here and it provides a major intake for the Great Artesian Basin.

This is a resource that is millions of years old, the minerals adding to the quality of the water, providing a resource as pure as you could find.

Despite the arid nature of the Queensland Outback the Carnarvon Creek has not dried up in five million years.

The top of the cliffs is what is left of a basalt cap. Volcanoes that ended 27 million years ago.

The gorge extends 20km to west, and there are huge elevation shifts.

From the Boolimba Bluff that forms such an imposing landmark you gain 200m but at the rim of the range you are 1000m above sea level. 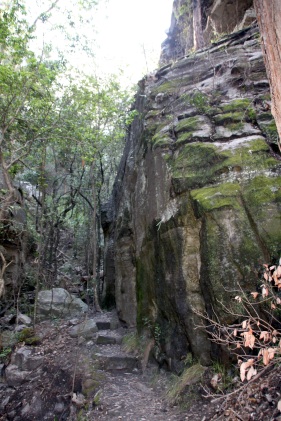 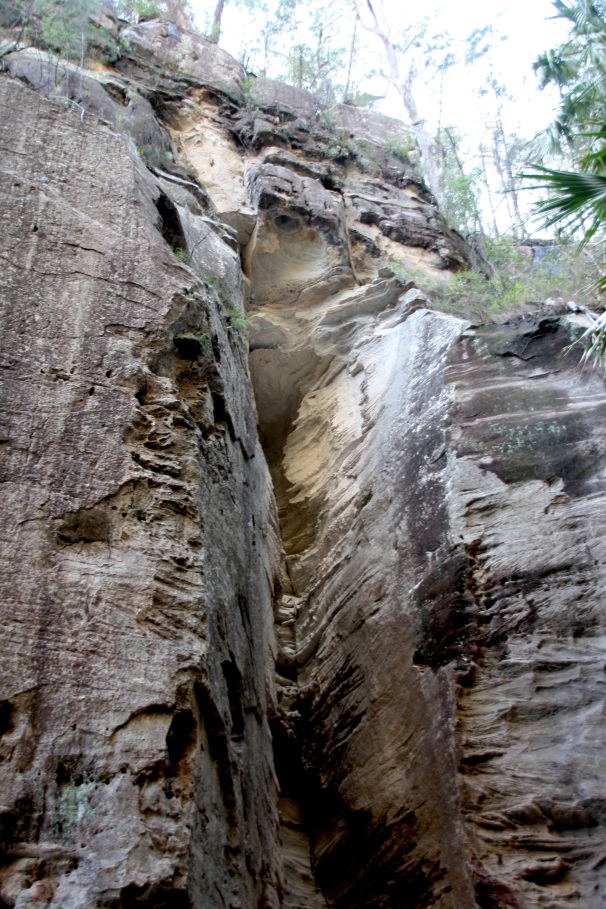 And there is a wealth of cultural heritage such as the rock art at Baloon Cave, one of three sites accessible and that show how rich the area is in indigenous history. The track is suitable for wheelchair users if they have someone to assist them.

Boolimba Bluff is a 7.2 kilometre round trip and includes 930 stairs and some ladders. 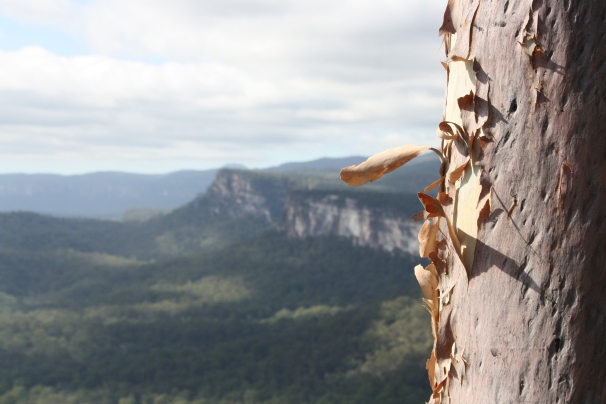 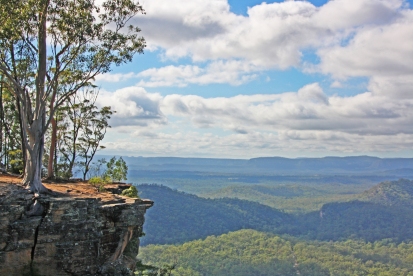 At the top, the bluff provides you with sweeping views of the Gorge, the plains to the east and the Great Divide to the west.

The Ampitheatre is the most amazing place. 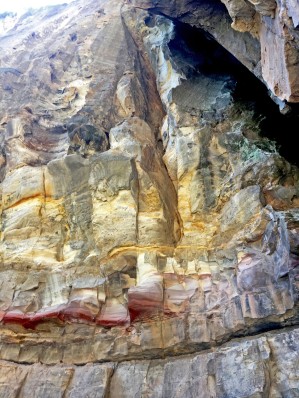 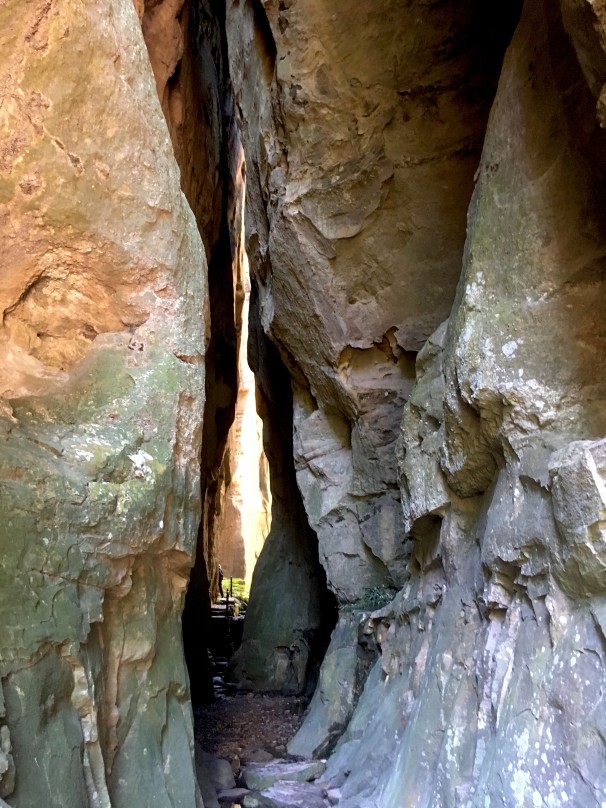 You cross creeks to get there and as you enter the sliver of space between the towering cliffs you feel the cool air.

Look up at the finger of light penetrating the darkness.

The walls of the chasm are just wider than your body but then you emerge into this hidden oasis. 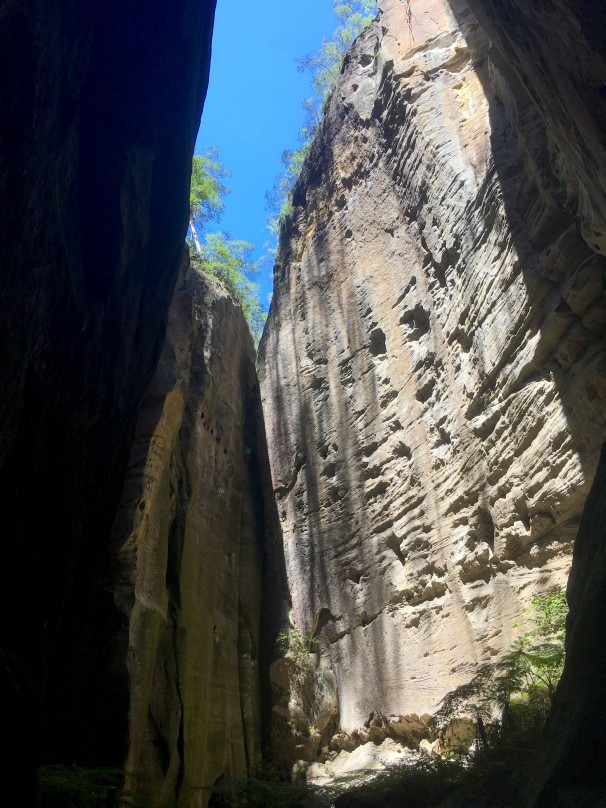 The Ampitheatre is a hole in the cliff tops, where the sandstone has been eroded away over millions of years and eventually the basalt lid has fallen in.

It’s like a lost world, cut off from time.

Just look, look around. Sheer walls with vegetation around the rim. A place to sit and reflect … reflect on time, reflect on history, reflect on the creation of the universe. 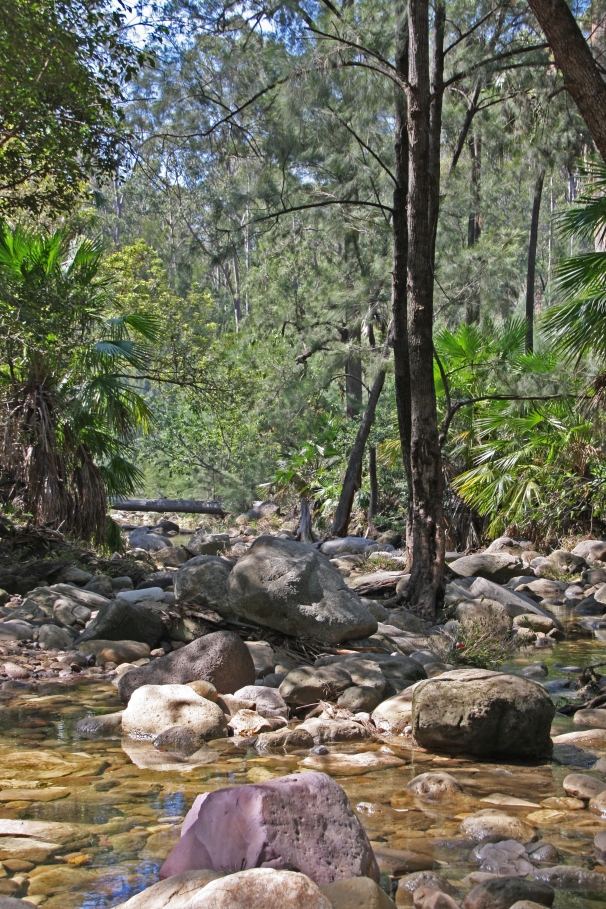 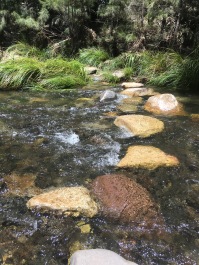 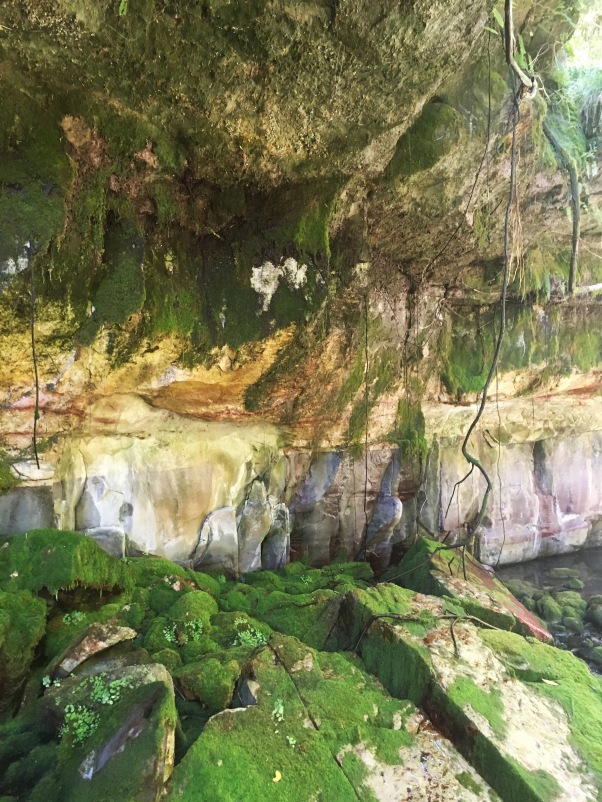 The Moss Gardens, again after crossing a stream, see you walk past rock walls covered in moss and lichen. Ferns, the strangler roots of figs … and you come out at this pristine waterfall and rock pool.

Such a pleasant sound. The splashing of water, the sound of life.

Above the waterfall beautiful sub-tropical plants … and towering sandstone cliffs.

The water dripping constantly from the sandstone sustains a lush, green carpet of mosses, ferns and liverworts.

The Art Gallery includes more than 2000 motifs that have been stencilled or engraved by the first inhabitants.

Big Bend is for walk-in camping and is about 10km in from the Ranger Station.

Short walks include The Rock Pool, about 300m off the road into the park. Carved from the bed of the creek by the turbulence of the water, it is the only place in the gorge to swim.

The Nature Trail offers a 1.5km return from the visitor area by crossing the creek twice. Otherwise follow the creek back to the rock pool picnic area.

Mickey Creek Gorge is a 3km return walk into the narrow side gorges where walking can turn to an off-track adventure if you want to continue further up these wilderness areas. Steep cliffs loom on either side, tall eucalypts and palms reach for the sunlight, moss covers boulders as water trickles down to the larger creek where tree ferns and rock ledges provide pools where you half expect to see a platypus.

The national park is home to the Carnarvon fan palm and macrozamia moorei … a cycad that only grows in central Queensland.

The fauna ranges from the scarlet sided pobblebonk and the emerald spotted tree frogs to black-headed pythons, from a jumping spider to an assassin bug that waits for ants.

While the swamp wallaby is a solitary species, the eastern grey is communal, and the pretty face wallaby … well, it speaks for itself, with distinctive black and white markings on either side of its face.

Monotremes include the short beaked echidna and its close relative the platypus. There are more than 300 species of dragonflies in Australia, and their descendants date back  325 million years.

Through it all, visitors are reminded: Take only memories, leave only footprints.

Carnarvon Gorge reminds you how precious Earth is and how fragile the balance of nature.

“This pale blue dot. A mote of dust suspended on a sunbeam” – Carl Sagan 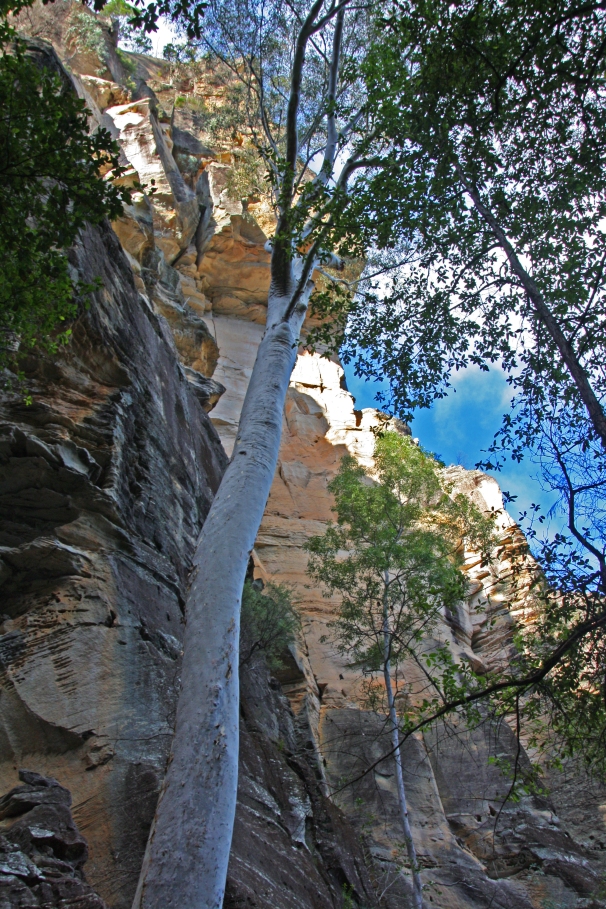 If you want to see wildlife, get out early.

Walk as far as you can while fresh then return, going into side gorges as you go.

Pack a torch if you plan a big walk.

Take enough water to cover the day. If you run out, drink from the faster flowing streams.

The best hiking times are in the drier and cooler months of April through til October.

5 comments on “Trekking Through Time”