The Romance of Rail 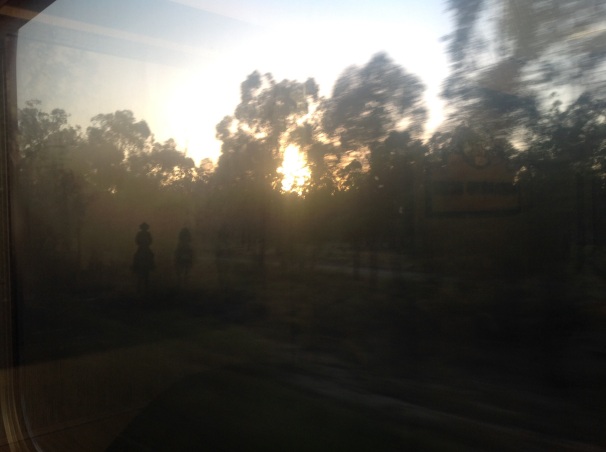 Experiencing the Spirit of the Outback

“You’re getting on that plane.”

There is probably no greater goodbye than that of Rick and Ilsa in the airport scene from Casablanca.

“I’m not good at being noble, but it doesn’t take much to see that the problems of three little people don’t amount to a hill of beans in this crazy world. Someday you’ll understand that.”

And then the final goodbye: “Here’s looking at you kid.”

It’s one of the key moments when it comes to travel. That time of departure … when you say goodbye.

Whether it be on the platform of a railway station, at a bus depot, on the dock or at an airport lounge.

There is that golden moment.

There’s that sense of excitement, of anticipation … or is it anxiety?

Have I packed everything? What lies ahead?

It’s when you step away from your past, from what you are comfortable with, into the unknown.

It sweeps over you and for a short time wraps you in a blanket of solitude.

When the carriage doors are slammed shut, the steps are taken away and there are those moments to reflect … railway station trolleys are wheeled past, whistles are blown, the station master signals all clear and there is the gentle lurch as the locomotive’s power kicks in

Well-wishers on the platform wave goodbye … and you catch your own reflection gazing out of the window.

It’s a wistful moment as the train glides out of the station.

You could be in the Agatha Christie novel – 4.50 From Paddington – or one of Alfred Hitchcock’s movies such as Strangers on a Train.

You’ve settled into your space, racked the bag. The people on the platform drift by, as if they are part of another world.

Minutes before there had been a noisiness as luggage was carried on board, provisions loaded into the dining cars.

Small groups had gathered on the station, chatting, hugging, laughing – perhaps to hide a nervousness. And then the long embraces. 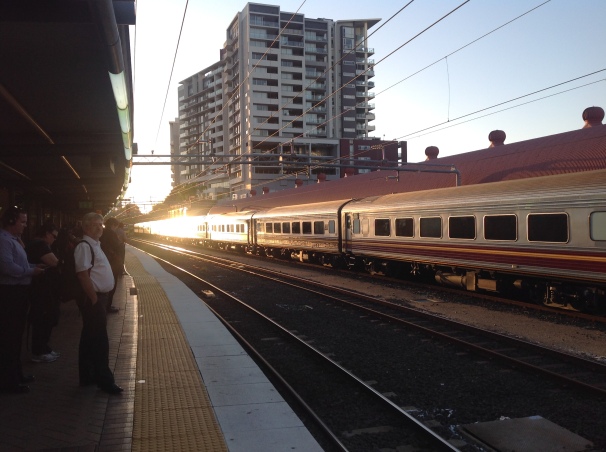 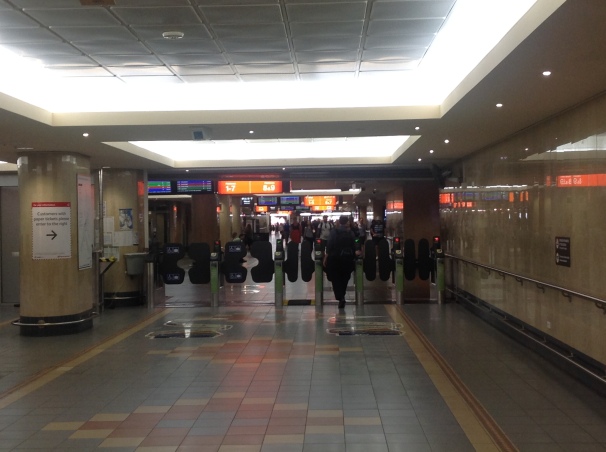 It was about this time last year and I was driving to Darwin. A spur of the moment thing but wanted to see a bit of Outback Queensland along the way.

Emerald in the central highlands was the changing point between the coast and the inland.

Jericho, Alpha, Barcaldine, Longreach, Winton … the outback towns rolled out before me. Names I had heard but couldn’t quite envisage.

Then there was the Stockman’s Hall of Fame, the Tree of Knowledge, Qantas Founders Museum and the Age of Dinosaurs. I knew of them … but what were they like?

That was why I was standing on Platform10 at Roma St station at 5.40 of a Tuesday evening.

In a way it was a trip back in time. And I would get to find out more about these places on the map, the places in time.

Queensland Rail Travel and Outback Queensland Tourism had combined to present a group of writers with the chance to experience the journey.

It coincided with the re-branding of the Spirit of the Outback, one of Australia’s more distinct rail journeys.

The options are there to link up with experienced tour operators who provide a variety of interests but all with a common theme … everything is pretty much authentic or based on actual events.

No need to create big attractions; it’s all there in front of you.

Then there is the country itself, the wide expanses of sheep and cattle country, gidgee scrub and spinifex plains.

I am looking forward to the big skies of a night where the stars really do reach down to the horizon.

The sky of the outback is like no other. Pure, clear, bright. Nature at her finest.

And the history of the inland speaks so strongly. The achievements and the hardships of the pioneers who opened up this country. Who went in search of the great inland sea and found mile after mile of grassland, and harsh, coloured, dry landscapes.

Those pioneers are characters of the bush that reflect life today.

The Outback is enticing. But it’s also very marginal out there beyond the Great Dividing Range.

They have seen fire and flood. At the moment they are trying to survive the latest drought.

Out beyond the Great Divide it’s almost the line between haves and have-nots of Australia.

What we have in South-east Queensland is water. Yet the inland lakes and the Darling River are as good as dried up and shrivelled in the heat.

Many of once-famous cattle and sheep stations have de-stocked.

That’s why tourism is such an important weapon in that fight for survival in the bush. That’s why I’m privileged to travel by train to experience the highlights.

Aptly named, the Spirit of the Outback is Queensland’s only rail service offering private cabins.

It’s not the inter city express that travels through the heart of Europe at speeds up to 300km/h.

Instead, it averages speeds of 100kmh between Brisbane and Rockhampton then between Emerald and Longreach it rolls along at a more sedate 80kmh.

Single and double beds, white tablecloths in the dining car. This is a chance to relive the way railways opened up the outback a 100 years or more ago.

That reminds me of a little anecdote from a journey long ago.

We were standing on a platform in the UK and the announcer said something like, the next train for London will arrive at Platform 2 in two minutes. Following that the express will be arriving at Platform1 in 10 minutes time.

And we would joke about the equivalent in Australia. The next train to Brisbane will depart in two days.

Now I am living it: There are two return train services a week between Brisbane and Longreach.

The Spirit departs Brisbane on Tuesday at 6.10pm and Saturday at 1.55pm then from Longreach at 10am Monday and Thursday. With diesel locomotives, the 1325km rail journey takes about 27 hours through ever-changing scenery.

There is the option to catch a Qantaslink flight to or from Longreach for one leg of the trip.

The Tuckerbox Restaurant is the first class dining car for breakfast, lunch and dinner, while the revamped Shearer’s Rest lounge provides light refreshments and beverages. Movies are available, viewed on supplied tablets.

There is an economy lounge and a servery that provides meals, light refreshments, confectionery and beverages. The air-conditioned carriages have been refreshed, themed on cattle and sheep stations to retain the atmosphere.

Showers and toilets are located at the end of all sleeping and sitting carriages. A small wheelchair is available for on-board use as disability access is limited due to narrow carriage doors and passageways.

They also incorporate the stunning natural colours of the outback, corrugated iron on the ceiling, wrought iron on the booths depicting the brands from some of the cattle or sheep stations along the way.

“The Spirit” is one of the few trains to have a chef on board. Some food is pre-prepared but where possible it is sourced locally – no more than 200km from the track. And that’s something that is readily picked up by travellers – they really appreciate this as so often the food can taste the same.

The overwhelming attraction of Outback Queensland is the communities and the characters themselves … they have so many stories to tell and love chatting.

It’s a chance to live Australia’s story, the heritage and culture. But to do so you have to make the time … to look and listen, to understand the way of life.

These outback Queensland adventures are all about families having a richer experience.

The grey nomads are discovering the connection with land and the way of life as they travel around.

It’s an opportunity for families to position themselves around reconnecting … sitting round the camp fire, looking at the stars. Children will find it fascinating. A chance to kick the dirt.

Yet for newcomers to the bush they discover part of Australia’s character.

There’s the story of Captain Starlight to retell, and the singing of Waltzing Matilda. This alternative national song was written at a sheep station near Winton.

And this far outback town was also the birthplace of Australia’s national airline Queensland and Northern Territory Airway Service.

Then of course there are the dinosaurs, at Richmond and Hughenden as well as Winton.

This includes the site at Lark Quarry where about 3300 dinosaur footprints are clustered together.

Everyone should make the time to have such a privileged brush with history. 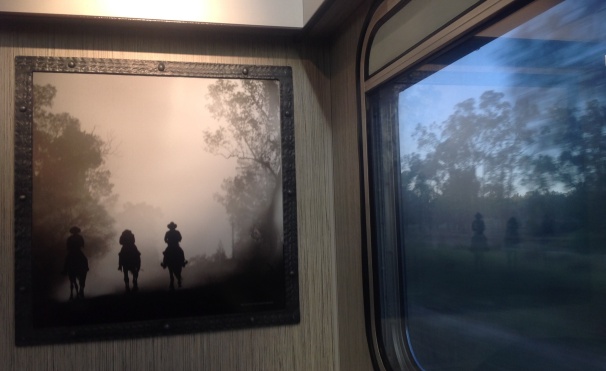 But getting to the outback is part of the adventure and Car C room 2-3 is to be my home for the next day and a bit.

First class sleeper compartments were previously single sleeping berths but they have been merged end-to-end, through removal of a common wall to create doubles where needed. There is 240volt power, a wardrobe and wash basin as well.

Take a small overnight bag for essentials and check in all other luggage. Don’t forget to pack a wide brimmed hat, a water bottle, your swimmers and some comfortable walking shoes.

In the warmer months especially, include insect repellent for the great outdoors.

Being a night departure from Roma St means dinner is served somewhere between Brisbane and Gympie. All meals are included in the first class ticket price.

There’s a choice of beers from the bar and homemade damper with a trio of dips, including macadamia nut dukka.

The red? A Mollydooker cabernet sauvignon from the McLaren Vale in South Australia. That’s to go with the lamb rump served with sweet potato, roasted root vegetables and broccolini.

The other choices were classic t-bone, grilled pork cutlet or three cheese tortellini. Outback-sized servings and more than adequate judging by the level of conversation of fellow passengers. 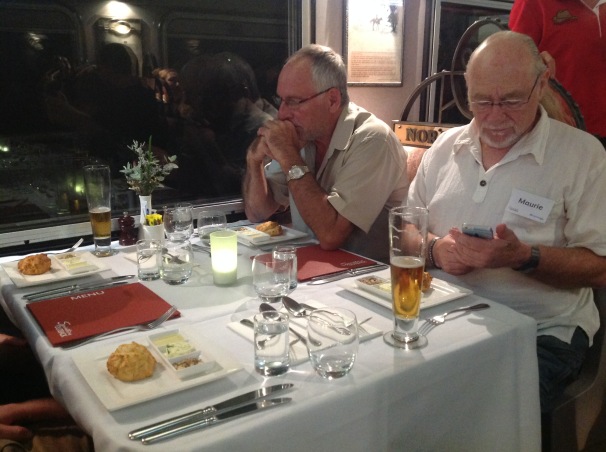 There was a choice from two desserts or cheeseboard.

A rabble? A soak? A cabinet?

Eventually, you make your way back to the cabin. You doze. You think you are awake but the time slips by, like the countryside. It’s 2.50 so it must by Rockhampton.

You prop yourself up on the pillow and peek out through the venetian blinds on the window to the station.

No, Gladstone … it’s another two hours to Rocky.