Budapest: The Heart of Hungary

The victors and the vanquished, the powerful and the humble. The Hungarian character has been forged from centuries of turmoil.

Being at the cross-roads of Europe and Asia brings with it benefits … and battles.

North and south, east and west.

And running right through the capital city Budapest is a boulevard as grand as any in the world. Yet at the same time it is marked by the cruelty man can inflict on a fellow man.

It is an avenue that links city with country yet also two memorials that link the nation’s history with today’s culture.

Andrassy Avenue sits right up there with the Champs-Elysees in Paris.

As much about achievement as a memorial to war.

The beauty of Andrassy Avenue and the spirit of the people is reflected against the darker pages of history..

At first glance Hungary looks like a western country but dig down a little and you soon find links to its Asian and Turkish past.

It was part of the Roman Empire until the fifth century AD.

They were over-run by the Huns through fierce battles. Germanic tribes, Lombards, Avars and Slavs all controlled Budapest until the arrival of the Magyars in about 896.

The history of this nation is laid out before you throughout its capital city.

Perhaps nowhere better than at Heroes Square, at the north-eastern end of Andrassy.

Here the seven chieftains of the Magyars (or Hungarians) are depicted – they were the leaders of the seven tribes at the time of their arrival to the Carpathian Basin.

Located at the end of Andrássy Avenue, Heroes’ Square is the entrance to the City Park as well as one of the most spectacular venues in Budapest.

The three main sites of the square include the Hall of Art, built in 1896, the Museum of Fine Arts, inaugurated in December 1906, as well as the Millennium Monument, linking both buildings visually.

The latter includes a 36-metre central column, topped by a statue of the archangel Gabriel. 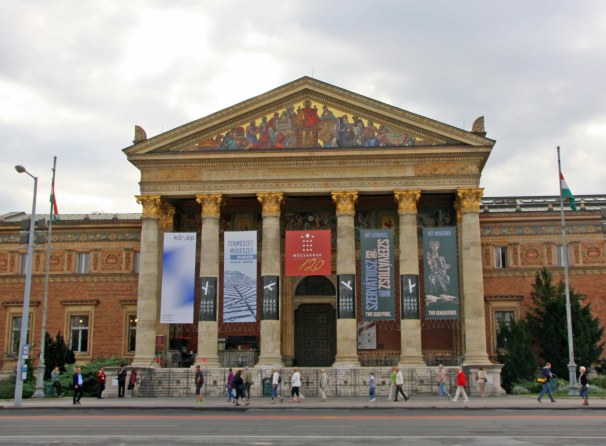 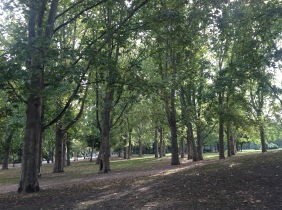 Budapest arose out of two Bulgarian military frontier fortresses Buda and Pest, situated on the two banks of Danube.

Both towns were devastated during the Mongol invasion of Europe in 1241-42 and subsequently rebuilt by colonists from Germany, who renamed Buda “Ofen”, after its numerous lime kilns. (The “Pest” name, which has a Slav origin, also means “furnace”.)

During the 14th century, the Angevin kings from France established Buda as the royal seat of centralized power. They built a succession of palaces on the Várhegy or Castle Hill, reaching its zenith during the Renaissance under the reign of “Good King” Mátyás (1458–90) and his Italian-born wife, Queen Beatrice of Naples, with a golden age of prosperity and a flourishing of the arts.

Just off Andrassy Avenue is St. Stephen’s Basilica,  named in honour of  the first King of Hungary (circa 975–1038), and today is the co-cathedral of the Roman Catholic Archdiocese of Esztergom-Budapest. Like the Matthias Church on the Buda side of the Danube River, it bears testament to the passage of history. 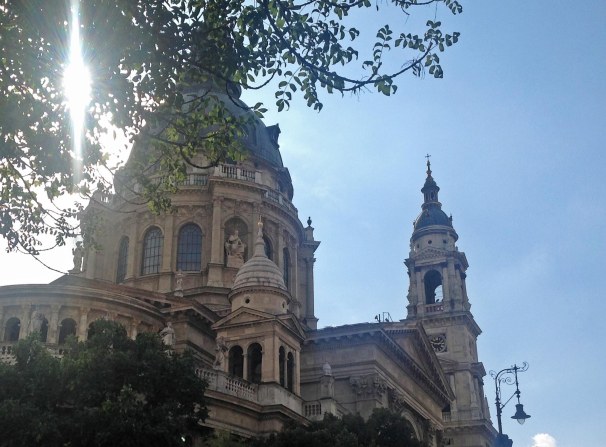 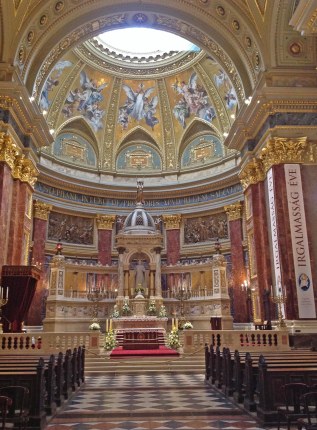 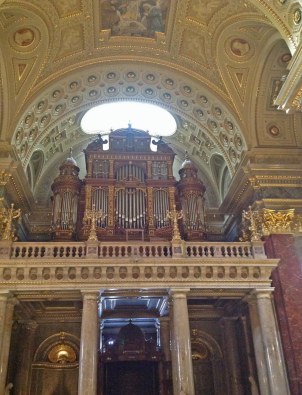 Hungary’s catastrophic defeat in the Battle of Mohács in 1526 against the invading Turks, led by Suleiman the Magnificent, paved the way for the Ottoman occupation of Hungary that lasted until 1699.

The rise of the Austro-Hungarian Empire saw the Hapsburgs as the dukes of Europe for 600 years – ruling from Romania to Switzerland.

At the time of Emperor Franz Josef a dozen languages were spoken throughout the breadth of the empire. 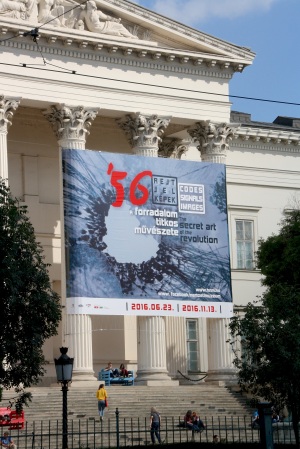 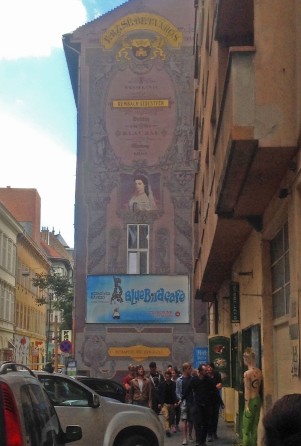 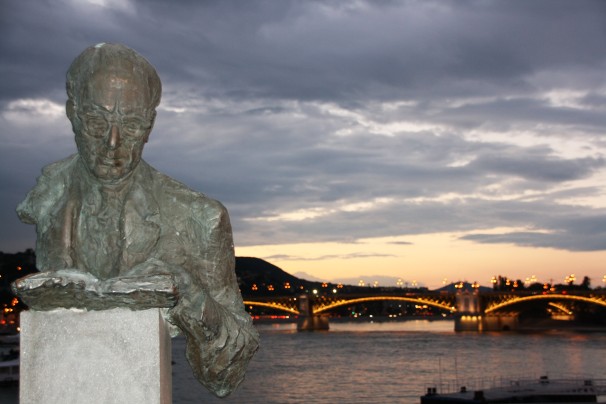 In the early 1900s it was expected that Archduke Franz Ferdinand was to follow in his uncle’s footsteps.

Yet tensions were growing, especially in Serbia, which saw the assassination on June 28, 1914, of Franz Ferdinand and his wife in Sarajevo, capital of neighbouring Bosnia.

The upshot of that was World War One. The Great War that ripped Europe apart.

Hungary again found itself on the wrong side of history when the fires of war again broke out in 1939.

The self-appointed regent Miklós Horthy was promised a re-united nation by the Nazi party as the spoils for backing them.

Yet the fascist Arrow Cross Party’s power grew as World War II raged across Europe and instituted a reign of terror in Budapest.

A testament to the cruelty of this regime is the Shoes On The Danube Embankment, a world-famous composition that comprises 60 pairs of metal shoes set in concrete on the riverbank. 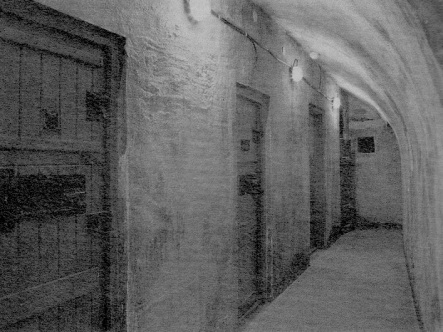 It commemorates the Hungarian Jewish victims of the killings committed by the Arrow Cross militiamen in 1944-1945. The killings usually took place en masse – the victims were lined up at the embankment, and shot into the Danube, execution-style.

Yet the cruelty to mankind is etched throughout Hungary.

Free elections were held but due to Soviet pressure the government coalition, led by the Social Democrats, accepted the small Communist Party into the coalition.

In the election of 1949, the party gained power while the Soviet Army propped up the Hungarian state.

Under their auspices, the former Arrow Cross torture chambers in the prisons filled up with their opponents.

Arrests, beatings or summary executions were used as a standard tool by the Secret Police, who employed an extensive net of informants.

The Stalin Monument in Budapest was completed in December 1951 as a “gift” to Joseph Stalin from the Hungarian People on his 70th birthday (December 21, 1949).

The monument was erected on the edge of Városliget, the city park of Budapest.

The bronze monument stood 25 metres tall in total with Stalin portrayed as a speaker, standing tall and rigid with his right hand at his chest. The sides were decorated with relief sculptures depicting the Hungarian people welcoming their leader.

It was torn down on October 23, 1956 by enraged anti-Soviet crowds during Hungary’s October Revolution.

On that day about 200,000 Hungarians gathered to demonstrate in sympathy for the Poles who had just gained political reform during the Polish October.

The Hungarians broadcast 16 demands over the radio, one of them being the dismantling of Stalin’s statue. 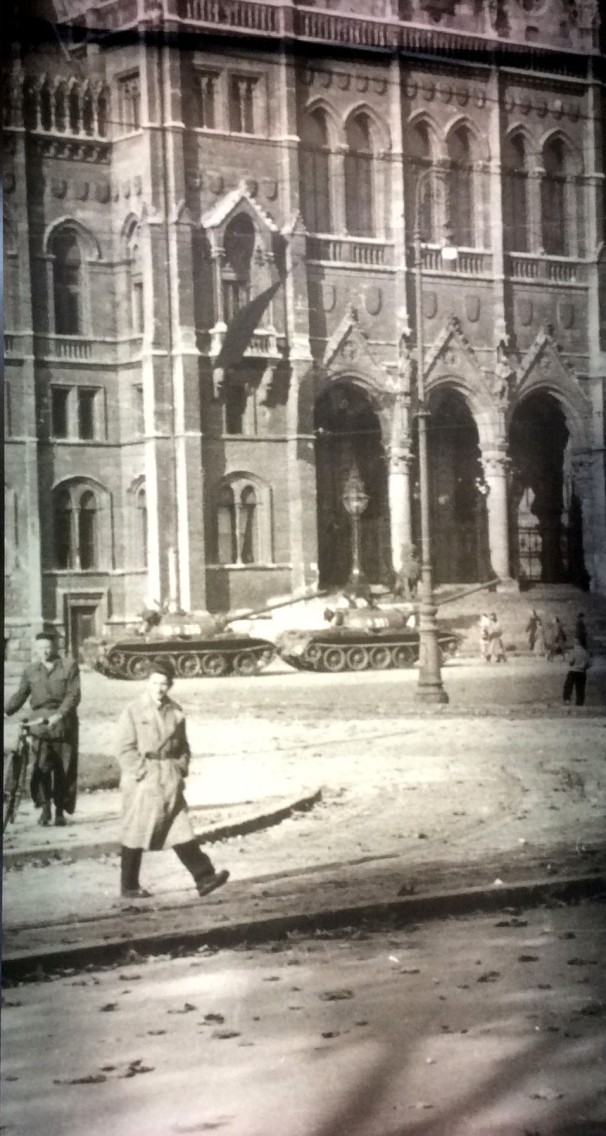 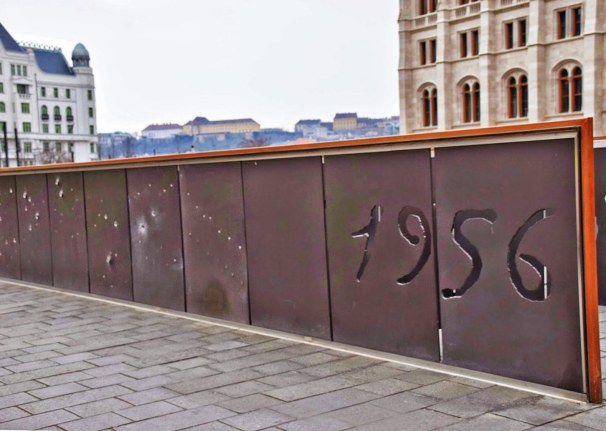 It is said 100,000 Hungarian revolutionaries demolished the Stalin statue, leaving only his boots, in which they planted an Hungarian flag. The bronze inscribed name of the Hungarians’ leader, teacher and “best friend” was ripped off from the pedestal.

Before the toppling of the statue, someone had placed a sign over Stalin’s mouth that read: “Russians, when you run away don’t leave me behind!’’

The site of the former Stalin Monument is now occupied by the Monument of the 1956 Revolution, completed in 2006 for the 50th anniversary of the historic event.

The uprising was brutally suppressed by the Soviet Army but throughout the 1960s and ’70s liberalising reforms were starting to be introduced. Political prisoners and church leaders are freed, farmers and industrial workers given increased rights.

Then in 1989 the border with Austria was opened, and thousands of East Germans escaped to the West.

The Communist state in Hungary was dismantled and a transition to a multi-party democracy saw Soviet forces start to withdraw from and the Warsaw Pact dissolved.

Linking Heroes Square with the city is Andrassy Avenue, a 2310-metre boulevard designed in 1920s and featuring beautiful buildings commissioned by architects. 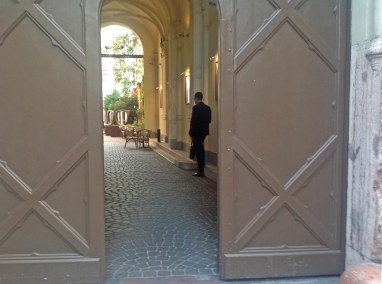 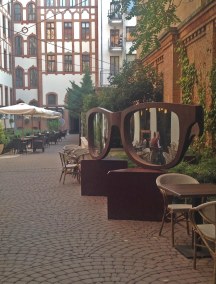 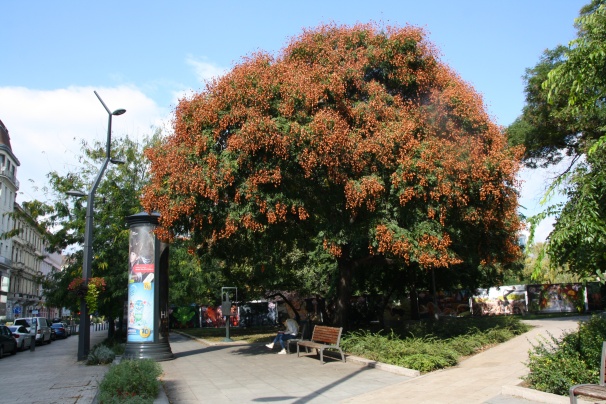 The Opera House is a memorial to Franz Liszt and to composer, conductor and pianist Ferenc Erkel who is regarded as the father of Hungarian grand opera, and also composed the music of Himnusz, the Hungarian national anthem.

Across the river, The Citadel stands out for all to see. It used to be a fortress, which was erected in 1854 by the Habsburg emperors after overcoming the Hungarian army in the revolution of 1848-49. 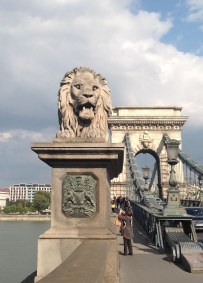 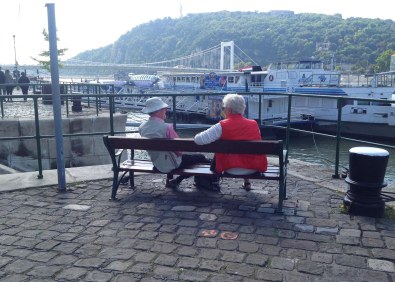 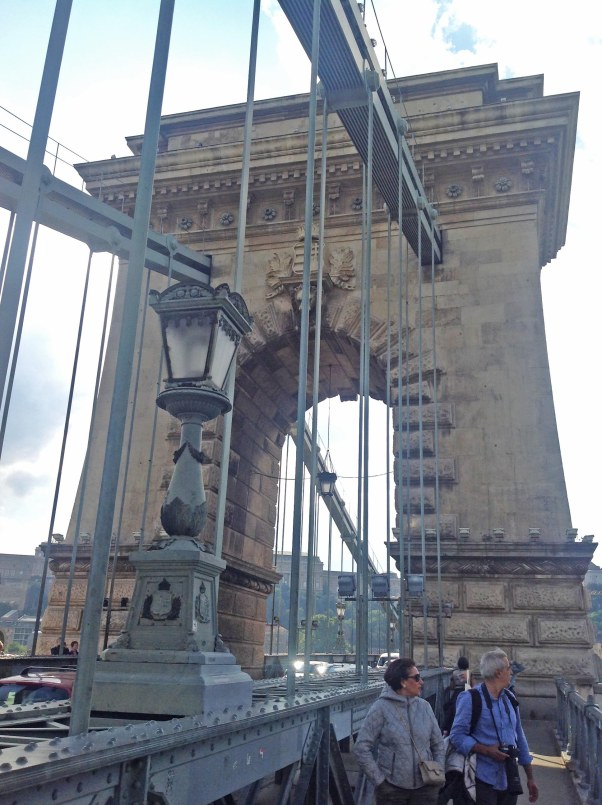 It is a divine walk up to the Citadel and that statue of a magical, powerful woman overlooking Budapest and keeping it safe from harm again.

The Szabadság Szobor or Statue of Liberty was first erected in 1947 in remembrance of the Soviet liberation of Hungary from Nazi forces during World War II. Its location upon Gellért Hill makes it a prominent feature of Budapest’s cityscape.

The 14-metre tall bronze statue stands atop a 26-metre pedestal and holds a palm leaf. Several smaller statues are around the base, but the original monument consisted of several more that have since been removed from the site and relocated to Statue Park. 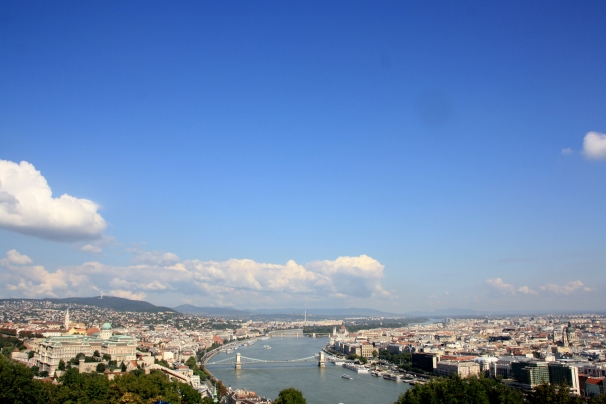 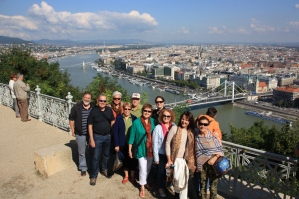 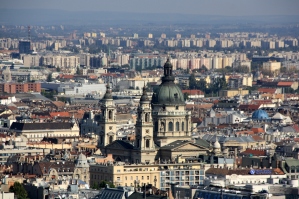 During the communist era the artists operated under a T system … some were forbidden but others were tolerated, chosen to work.

At the time of the monument’s construction, the defeat of Axis forces by the Red Army was officially proclaimed “liberation” – leading to the original inscription upon the memorial (both in Hungarian and Russian): 1945 which can be translated to read, “To the memory of the liberating Soviet heroes [erected by] the grateful Hungarian people [in] 1945”. 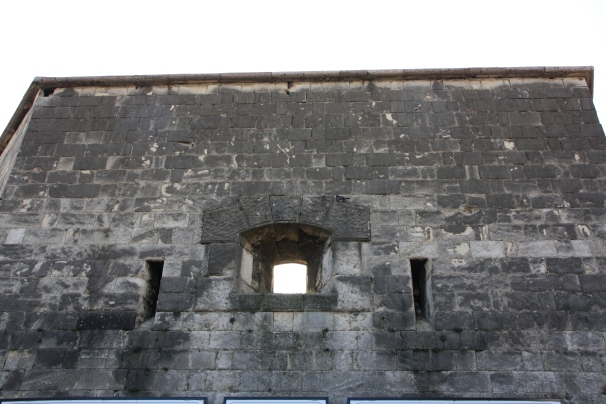 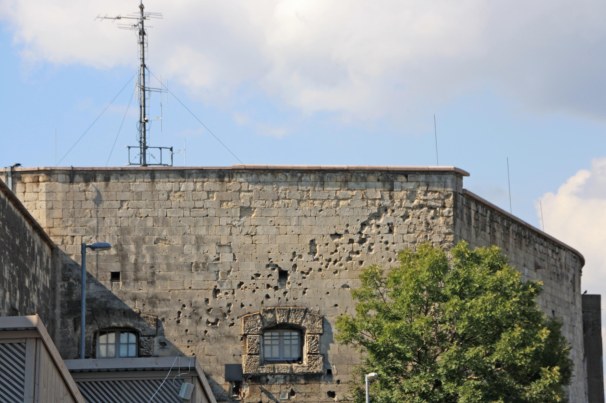 Over the following years, public sentiment toward the Soviets decreased to the point of revolution, which was attempted and temporarily succeeded in 1956 and subsequently damaged some portions of the monument.

After the 1989 transition from communist rule to democracy, the monument was covered in a cloak, but the people left holes for the eyes.

When the cloak was removed it revealed the angel-like figure of freedom that signified the ghost of communism had gone.

The inscription was modified to read: “To the memory of those all who sacrificed their lives for the independence, freedom, and prosperity of Hungary.” 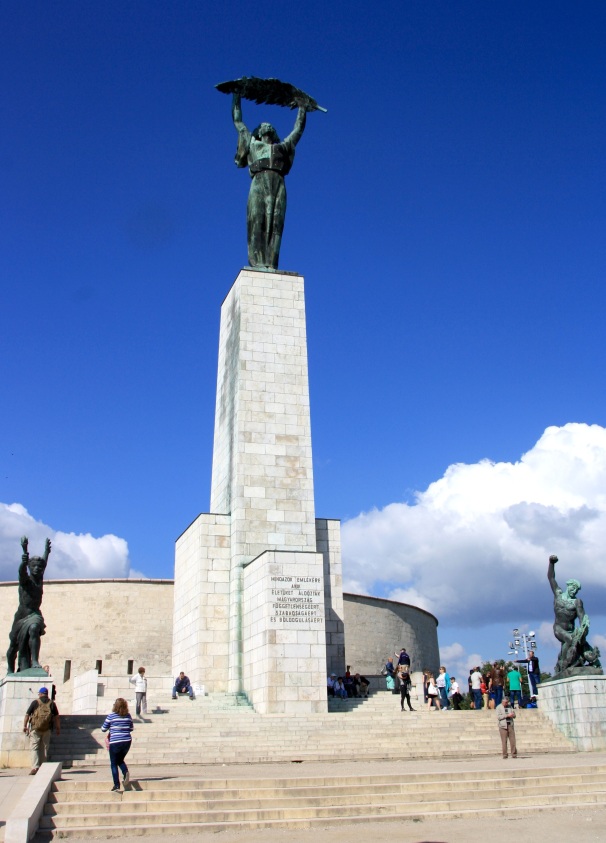 3 comments on “Crossroads of History”