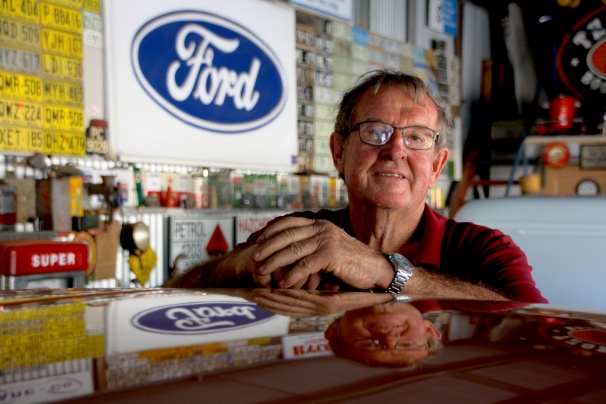 Connectivity and community … they are two of the keys to a long and happy life.

That hits you in places such as Deniliquin in country New South Wales.

So many committees and organisations, sporting and school events, charities. Deniliquin depends upon them.

And that community spirit has shone through in tough times to see the area survive and prosper.

Perhaps no greater example has been the rise and rise of the Deniliquin Ute Muster – an annual festival in which the utility vehicle that has been part and parcel of Australian rural life has been given centre stage.

Sitting on the banks of the Edward River that runs through the heart of the town, I am chatting to Denise and John Thomas. These two people exemplify community involvement.

It’s nearing sunset and they tell me about their life in Deniliquin, as well as the formative years of what has become the biggest gathering of utility vehicles in the world.

In the late 1990s the Deniliquin area was struggling due to drought. The main form of income from livestock and agriculture was drying up.

So in early March 1999 a group of people got together to initiate a festival to celebrate the rural lifestyle. The aim was to bring thousands of visitors to Deniliquin.

Denise was involved right from the start. This was despite having grown up and gone to school in the state capital, Sydney.

Her father had been transferred to Deniliquin and a teenage Denise wondered what she had gotten herself into.

Yet she got a job at the hospital and made some lifelong friends with the nurses.

That made it easy to fit in with the town.

John was born and bred here. His father Dave had a team of horses and he conditioned the irrigation channels with them.

He also worked on preparing the Tocumwal airport for the RAAF in the war.

Old Blue, as he was known, bought a farm on Mayrung Rd and expanded it over time.

Denise’s dad was the policeman and he was, as John says, “the biggest show in town.’’

John thought their kids would take the farm on but they went their own ways, though never far from Deni.

Now John and Denise are living in town and loving it.

The idea of a ute muster all came about as the Easter jazz festival had folded and Deni was left with a gap.

A public meeting was called and people came up with some great ideas.

Denise said the enthusiasm was infectious but it was felt they couldn’t compete with nearby Echuca and their river boats festival.

Instead there was the Hay plains, regarded as the flattest plains in the world … and the utes that typified the Deni way of life.

Utes form the backbone of country Australia. A work horse on the farm but also comfortable enough for town.

Something you can load up with farm equipment or livestock yet also put the shopping in or throw your swag in the back and head off for a week of fishing or camping out under the stars. 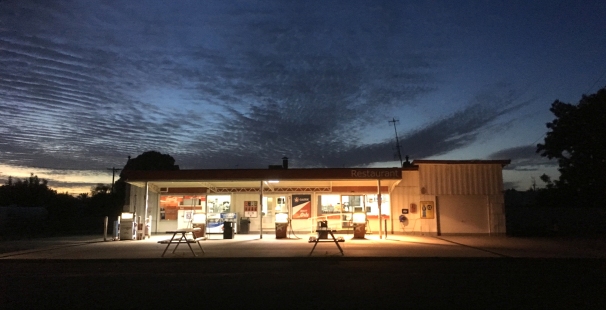 The Deni Play on the Plains Festival was conceived, a festival for people of all ages.

The long weekend in September/October coincided with Victoria, and didn’t clash with the agricultural shows in Deni and Hay that already had ute displays.

The muster started on October 2, 1999, with a horse-drawn wool wagon re-enactment to the wharves at Echuca to highlight the area’s heritage. There was a family camp-out, bush poetry and star gazing on a stock route just north of the town.

“Friday night was fellowship and we would do the utes on Saturday,” Denise tells me.

“A bit after we got going we realised we needed a sponsor so contacts with Holden were followed up. Within no time at all Holden came on board – they provided some funds and a ute to raffle.

“Blueys Ute World in western Sydney also came on as sponsors – they did the stubby holders as well as a cash backing.

“The Ute-ilize It sticker was designed to promote the show ute parade and competition … it was yellow and in the diamond shape of a road sign.

“From the first six weeks of discussion we were certain we were on a winner … nobody else did. They all thought we were crazy.

“For the first two years it was $10 to register the utes and to put them in the ute paddock. The concert was separate.

“Of course once we started selling the tickets for the Holden Maloo ute we knew we were in with a chance.”

Country music singer Lee Kernaghan was the man of the moment … he had a hit song She’s My Ute. The committee had no money but they booked him and everyone got a flyer.

That went out to all the wool sheds, the uni campuses, the hotels … everywhere. 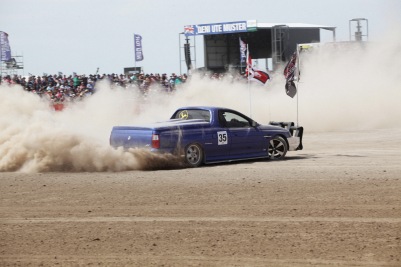 “We had flyers going all over the country. We even had a stall at the pedestrian crossing in the main street.

“It was exciting, it was fun, all new, learning as we went. No-one had done anything like this before … apart from a street stall.

“To make it even better we went for the Guinness World Record. They had no idea what we were talking about, so we had to explain it.

“All the utes had to be in makes and models. We expected 500 tops.

“We had arranged for the car clubs to follow it through … but 2839 turned up.

It was the largest number of legally registered utes ever assembled in unison by make and model on the largest, flattest natural open plains on earth.

“We were absolutely gob-smacked,” Denise reminisces. “No-one could move … they were lined up for kilometres. The town was grid-locked.

“There were over 400 WB (Holden) utes that year. The police had never seen so much traffic.”

After that Deni claimed the title of ute capital of the world. In the third year they made it a two-day festival.

Today it’s still held on Friday and Saturday of the Labour Day weekend in NSW.

“Yet for the first festival the concert was held in the memorial park at the showgrounds, so everyone had to come into town,” Denise continues.

“It hadn’t had rain for quite a long time and just as the concert finished it started to come down.

“The young people had so much fun. Everyone was happy … laughing.”

Right through these hectic days John was Denise’s back-up.

“Whenever I couldn’t do anything he was there.

“The festival was very male orientated, most of the utes were driven by men.

“John and the kids did everything I wanted. They worked like Trojans.

“All the families did. Everyone wanted it to work.

“No-one said no. People went out their way for us.” 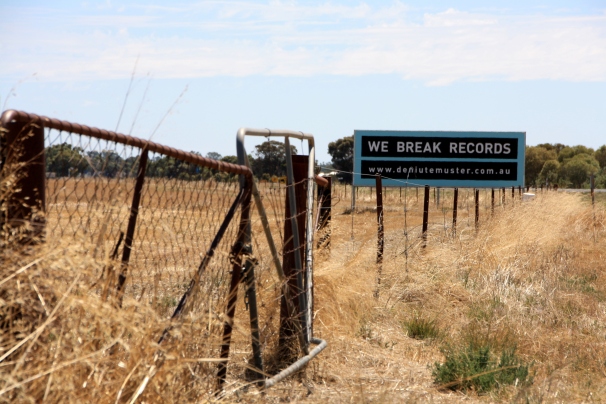 Such was the community involvement that a freight company made a semi-trailer available to use for the stage and another business loaned portable buildings.

Ute-ilize It was the theme and Denise remembers how they called for as many utes as they could so as to spell the words out on the plains and photograph it from the air.

A CB radio was used to put out a last-minute call for another 10-12 utes to complete the words. They were there in 10 minutes.

“Some of the stories,” Denise fondly remembers. “There were utes with bullbars the size of those used on trucks.

“The owners would phone up to book a ticket and tell us their story, how they had been saving all year to come.

“They could be calling from anywhere in Australia … they were so excited and you remembered them. You got to know them.

“The girls got involved too and that added a new dimension. There is now a section for chicks and their utes. It was great fun, rivalry too.

“When we all get together and look back …

“We never had a clue what we were doing but we never said no.

A ute on the pole was created to help promote the muster and the next year a vintage ute that had been stunningly mosaicked was unveiled. 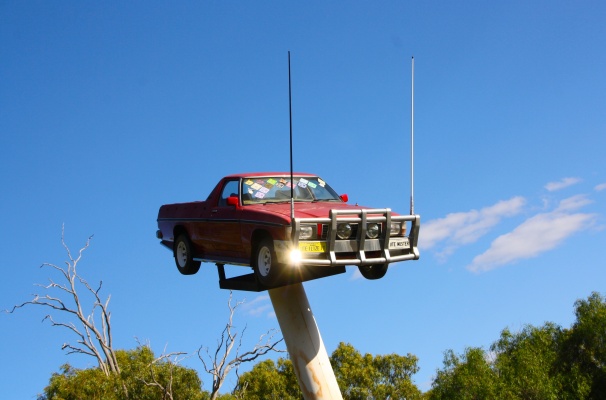 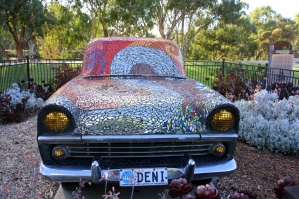 Both of these attractions, along with the famous Deni Ute Muster entrance gates, are year-round attractions in their own right.

“We got the ute for the pole from a young fellow in Narrandera,” Denise says.

“He was so excited that the muster was buying it. He put all the bits and pieces on it.

“We couldn’t tell him we were putting about 20 feet up in the air on a pole.

“A few weeks before we put it up he came to have a look and we wondered: ‘What are we going to do?’

“But he loved it. It’s been restored and is better than it ever was.”

Television presenter Ben Dark has been up there. So has former Geelong footballer Cameron Ling.

The 1980 Holden WB was the thing back then … all the jackaroos had one. 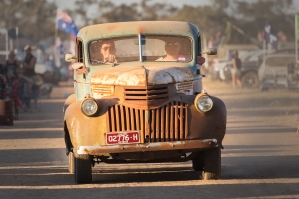 “We wouldn’t put a Ford up there,” John chips in, referring to his collection of classic cars – all with the blue oval symbol of Ford instead of the roaring lion of General Motors Holden.

John is quick to point out his affection for Deni.

“I love the place. The river. There are good people here.’’

His collection of cars is something to behold. Many have been lovingly restored yet included are some he bought from new such as a 1967 Ford GT XR. 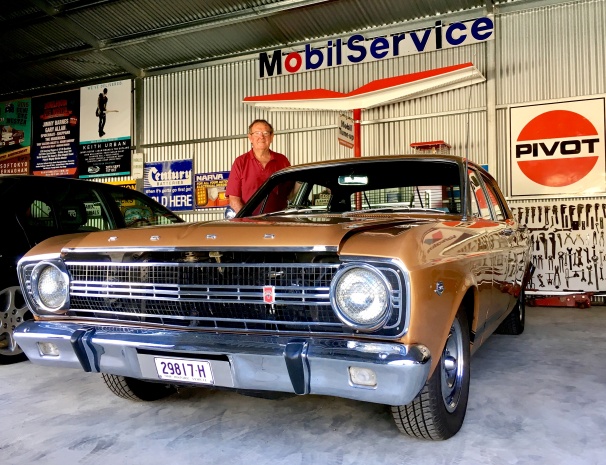 Mixed in with mementos from his days on the land are some vehicles he has done up, such as an XT Ford ute, a 1997 EL GT for Ford’s 30th year anniversary of the Falcons, an XW panel van and XD falcon ute. They are all V8s.

“Everyone thinks they were made by Willys but they were definitely Ford,” John tells me.

“Last year I did 40 years of Anzac marches with it.”

The irony is that the Thomas’ are driving a Holden now … a Colorado trailblazer. Well, Denise is.

Dos and don’t are pretty much based on common sense.

Bring a sense of humour, act responsibly and have fun.

Respect the Muster site and the town of Deniliquin.

Deniliquin is located at the intersection of the Riverina and Cobb Highway, about 725 kilometres (450 miles) south west of the state capital, Sydney and 285 kilometres (177 miles) north of Melbourne.

(Thanks go to Deniliquin Ute Muster and Rob Mulally for the extra photo contributions to this article.)

The ute and the driver

Utes have long been an obvious and intrinsic part of the Australian lifestyle. Everyone from farmers to jackaroos, labourers to business managers, students to politicians – the all hanker after the quintessential Aussie icon.

The relationship that exists between an owner and their ute has to be experienced to be believed. Something akin to a rider and their horse many would say.

Some utes are treated with idolising care and admiration while some are simply a workhorse.

A ute is a different beast to a sedan. Much more individual … an extension in many ways of the driver.

An adaptable person: someone who adapts to the particular task at hand, to the role or the environment.

Invaluable for work yet also adaptable for leisure.

There is a certain singularity about a ute … you can come and go much easier than say a truck.

It’s the same with travelling throughout the countryside. A go-anywhere vehicle in most cases. One in which you can simply throw the swag in the back and head off on the open road.