Getting Around The Australian Bush

“Fire lighted, on the table a meal for sleepy men,

A lantern in the stable, a jingle now and then;

The mail coach looming darkly by light of moon and star,

The growl of sleepy voices – a candle in the bar.”

The words of the classic Australian poem The Lights of Cobb and Co by Henry Lawson play in my memory.

Longreach comes as a real surprise. Arguably the economic centre of Outback Queensland, it is almost a mirage amid hundreds and hundreds of kilometres of grazing and scrub country.

Some 1300km from Brisbane, the capital city of Queensland, it is perhaps 2000km further to Darwin at the top end of the Australia. It’s in the middle of nowhere. Hundreds if not thousands of kilometres from anywhere, yet it has everything you need around it.

Pulling into the town after a long journey, you are not prepared for the facilities on hand. There is a feeling of wealth when so many other country towns are struggling to survive.

Yet even Longreach is battling, the result of continued drought and a shrinking government footprint.

It is the resilience and drive of the community that keeps the town alive.

It’s sheep and cattle country out here and sitting in the main street mid-morning I get to talking with David Lindsay, who has been down from Isisford for the Outback Drover’s Reunion.

Held each year at the end of April, start of May, outback workers, drovers, stockmen and women come together to honour the drovers of days gone by.

Sitting around the campfire they tell yarns and remember those who lived lonely in the saddle moving stock through the Australian Outback.

Indeed, one of the greatest cattle drives in Australia’s history started near here. That of Harry Readford, better known through history as the infamous Captain Starlight.

The town is on the Tropic of Capricorn, the line of latitude 23° 26′ 22″ south of the Equator and which marks the most southerly line the sun can appear directly overhead. This happens at the December solstice in the southern hemisphere.

As it turns out, the main street is called Eagle Street. Others honour Hudson Fysh, an Australian aviation pioneer who helped establish Qantas Airways, and Sir James Walker, a farmer and long-serving mayor of the former Longreach Shire Council.

The town is home to the Stockmans Hall of Fame that celebrates the pioneers of inland Australia while the Qantas Founders Museum recognises the beginnings of what was to go on and become one of the world’s greatest airlines.

Christa Wennemann comes to Australia nearly every year from her home in Tuebingen in Germany.

“Australia and me is one story after another,’’ she tells me over a cup of coffee.

“Everyone was going to Africa so I went to New Zealand and met friends there.

“They were coming here. I have been coming again and again.’’

Christa booked on the Monday for the train trip the next day from Brisbane on the Spirit of the Outback.

“I have been here before. Longreach and to the south.

“It was unbelievable … there was water on road, we were hoping that we could get through.

“We made it to Eulo. It was there I saw opals for the first time.’’

Impressed by the distances in the Australian Outback, Christa found the Stockman’s Hall of Fame to be informative.

“There is a lot to read. I have learnt how much the ladies did.

“The pioneers. The children. Everything was so far away.

Yet today we are in for another experience.

The only five-at-hand horse and carriage journey in Australia you can go on at a gallop.

Richard Kinnon started his Cobb and Co coach tours in Longreach eight years ago when sheep farming become hard due to sustained drought.

“It’s all about the experience,’’ he tells us from in front of the old McNally Welcome Hotel in the main street of town.

“We want people to experience the real feel of the outback, the integrity – of the history.

“The Life and Times of Cobb & Co has been nominated for the archives of Australian history for telling this story … it’s a great story to tell.’’

We are met in at the stables and yards behind the hotel by coach driver Jeremy Kinnon. 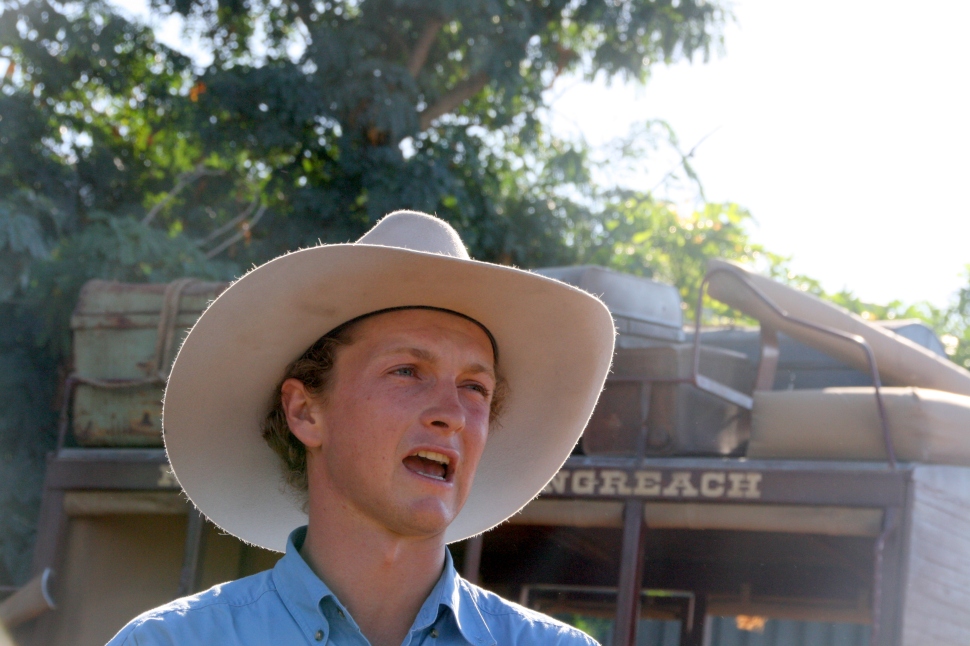 “This is an experience,’’ he announces, the sunlight of early morning illuminating the brim of his Akubra hat.

“It’s not a joy ride. We will be travelling along the original track that came into town.

“We’re dealing with real horses. We generally can judge what they’re doing but not what the people are doing.’’ 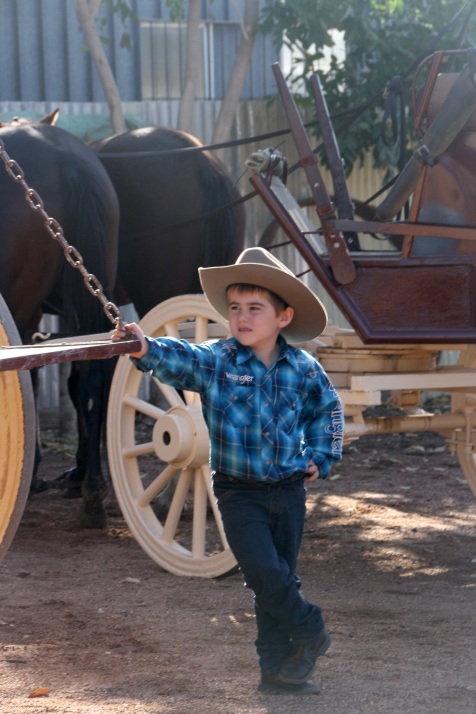 In horse and coach days the commoners and drunks rode inside, while the doctors and lawyers sat up top. Another passenger could sit at the front with the driver.

It’s an opportunity to experience what the early pioneers went through in this form of transport that opened up the inland.

The coach, pulled by five trained horses, takes a gentle tour through Longreach town, then heads out to the dirt track that is part of the original Longreach-Windorah Cobb & Co mail route – a gallop through the bush is an exhilarating experience for all ages.

For 70 years from the 1850s to the 1920s, Cobb & Co coaches were a principal means of transport in the colonies of Queensland, New South Wales and Victoria. 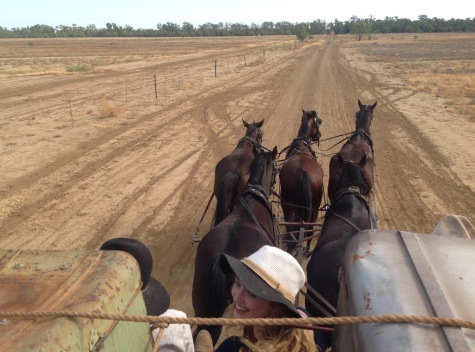 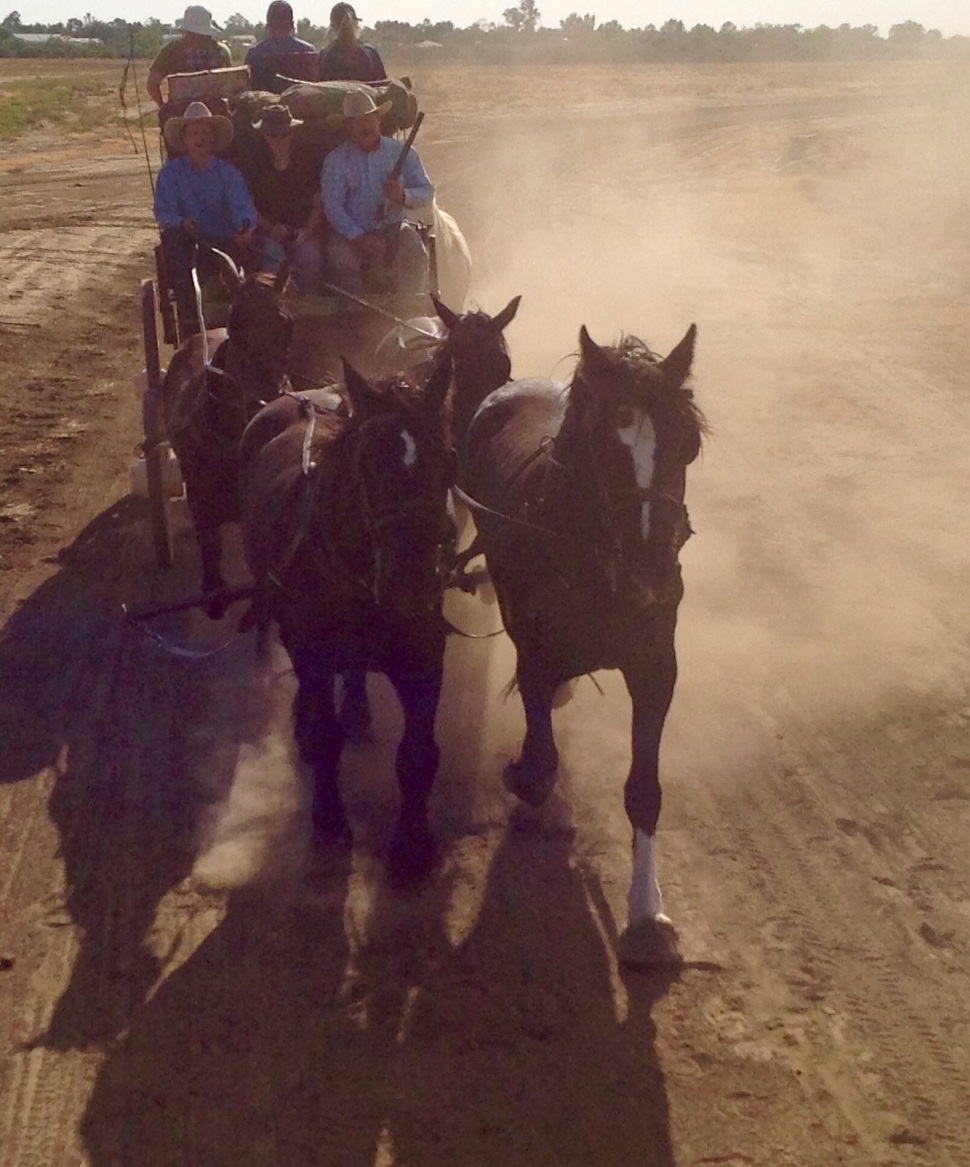 Settlers moving inland, new immigrants hopeful of success on the gold fields, shearers, agents, squatters, children and their parents – everyone used Cobb & Co stage coaches to move, as efficiently as was possible, around the colonies.

Even larger numbers of people, many of who lived in remote country towns, stations or settlements, relied on Cobb & Co’s mail delivery services.

Coaches brought essential supplies, news from home and a sense of connection to others in what was perceived as a distant and inhospitable land.

Cobb & Co routes were seen as a lifeline to isolated communities and a means of taming the vastness of Australia.

“A stumble in the passage of folk with wits abroad;

A swear-word from a bedroom – the shout of “All aboard!”

Five hundred miles of scattered camps will watch for Cobb and Co.” 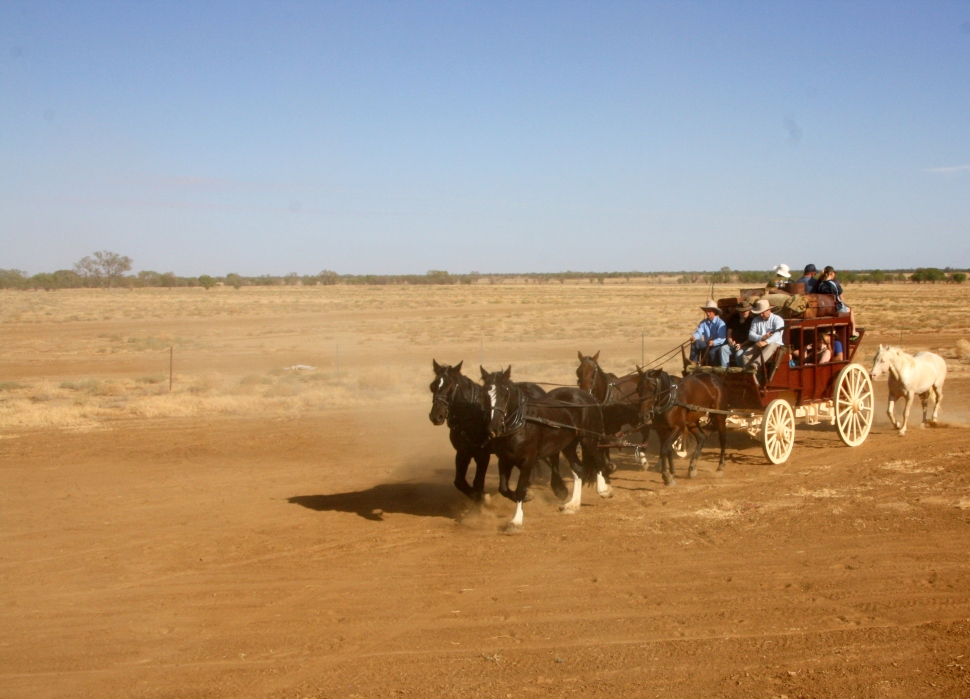 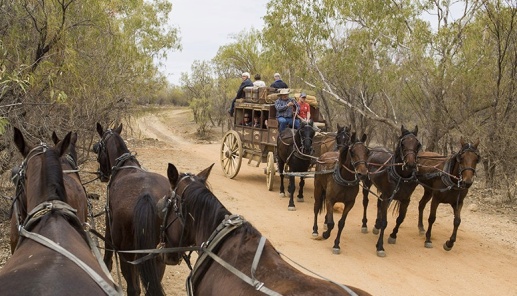 Back in the tea rooms at the former hotel, now Kinnon’s tea rooms and store, it is time for smoko of tea and coffee served with scones spread with jam and whipped cream.

And there’s time to relive the story of Captain Starlight. 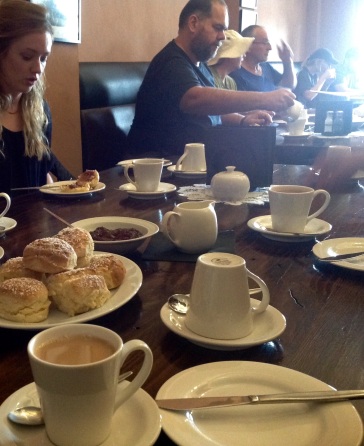 Henry Arthur “Harry” Readford – sometimes spelt “Redford” in Queensland – became something of a national hero for his exploits.

In 1870, Readford was working as a stockman on Bowen Downs Station near Longreach.

Realising that remote parts of the property, which stretched some 228km (142 mi) along the Thomson River, were seldom visited by station workers, he devised a plan to steal some of the station’s cattle.

With two associates, George Dewdney and William Rooke, he built stockyards in an outlying part of the property, and gradually assembled a mob of about 1000 cattle.

Knowing the cattle would be recognised from their brands as being stolen if he tried to sell them in Queensland, Readford headed for South Australia through the Channel Country and the Strzelecki Desert.

Only 10 years earlier, explorers Burke and Wills had set out to cross the continent along the same track, and died in the attempt.

As a droving exercise, it was a remarkable achievement. They exchanged two cows and a white bull for rations at Artracoona Native Well near Wallelderdine Station, then moved the remainder of the mob via Mt Hopeless, and sold them for £5000 (2009:A$250,000) at Blanchewater Station, east of Marree.

Readford was apprehended in Sydney in 1872, and faced trial in Roma, Queensland. However, the jury members were so impressed by his achievements that they found him not guilty.

Yet in 1881 he was in trouble again with the law, several counts of horse stealing resulted in Readford being jailed for 18months.

After his release, he drove cattle from the Atherton Tableland to Dubbo. Then in 1883 he drove 3000 cattle which were the first mob taken to Brunette Downs near Corella Creek on the Barkly Tableland in the Northern Territory where he was the station manager.

A true bushman, he became the manager of McArthur River Station but drowned in 1901 by trying to swim across a flooded creek while exploring Central Australia.

There’s so much to like about Longreach. The sound of cockatoos in the trees in the late afternoon,

The railway station that was completed in 1916.

Sitting, watching the cattle trains roll in, and then roll out of town.

Then there’s the country air with a clean crispness to it in autumn.

Yet most all, it is that magic hour as daylight floats away.

When you can gather around the campfire as the drovers used to do with millions of stars above your head.

Once more you turn to the words of Lawson.

“Scrub-yards and new bark shanties, we dash with five and six –

By clear, ridge-country rivers, and gaps where tracks run high,

Where waits the lonely horseman, cut clear against the sky;

Through stringy-bark and blue-gum, and box and pine we go;

New camps are stretching ‘cross the plains the routes of Cobb and Co.”

The 2017 Cobb & Co Stage Coach Experience tour season is from April 3 – October 31. The four-hour tour starts from The Station Store in Longreach. Monday to Friday from 8.30am. Bookings essential.