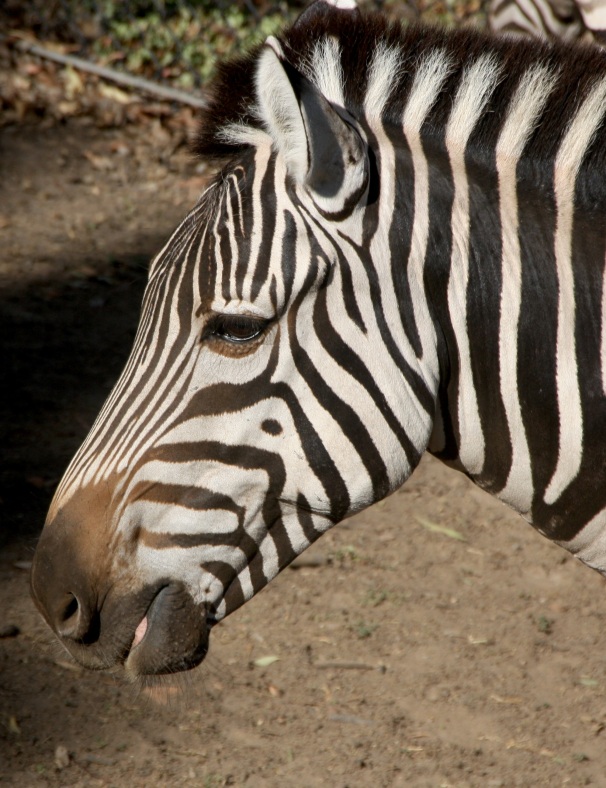 Sleeping at the Zoo

HOW many times have I driven through Dubbo without stopping for anything more than fuel?

Late in the 1960s, on my first surf trip to Noosa, we camped near the Macquarie River that runs through this small city in central New South Wales.

Years later, there was news it had established a western plains zoo with all the usual suspects of lions, elephants and tigers.

But who wanted to do that? After all, I had been to Taronga Park Zoo in Sydney.

Well, this time I took the opportunity, lured by the promise of sleeping with those lions and tigers, waking to the sight of giraffe and zebra.

And what a surprise. But the biggest was the small surprises. 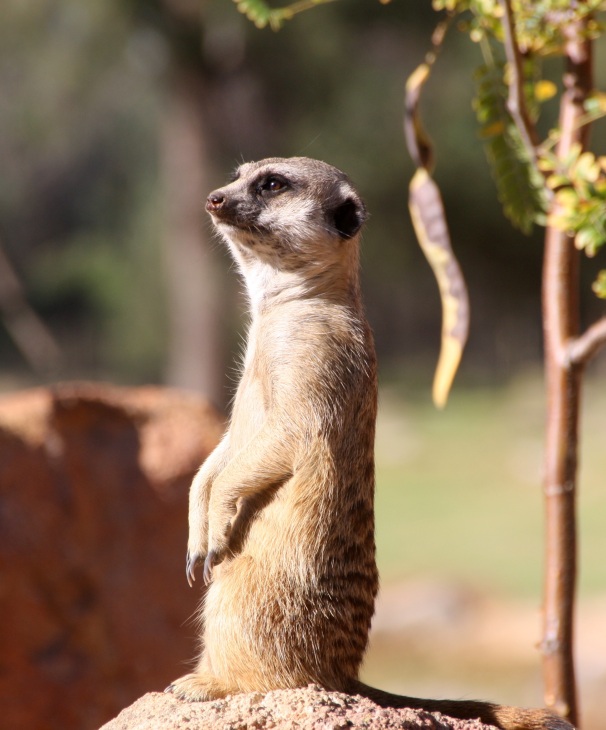 Sure, there were the big five – elephants, lions, rhinos, buffalo and hippos – but the real characters were the little creatures such as the meerkats.

And seeing our native animals up close and personal was a nice experience, including koala, wallabies, echidnas and dingo.

It was part of a night stroll with the use of red light so as not to startle these night walkers, seeing what the nocturnal creatures get up to. 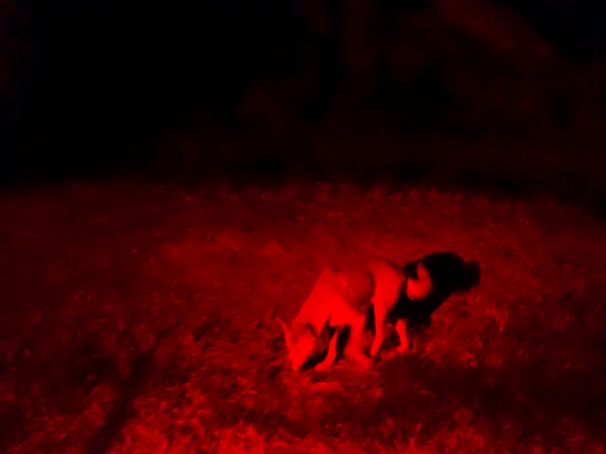 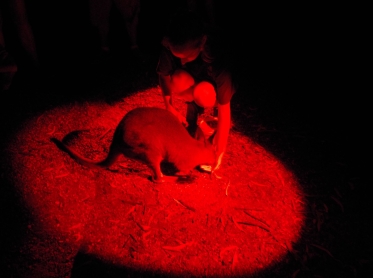 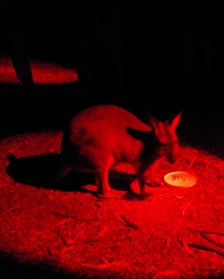 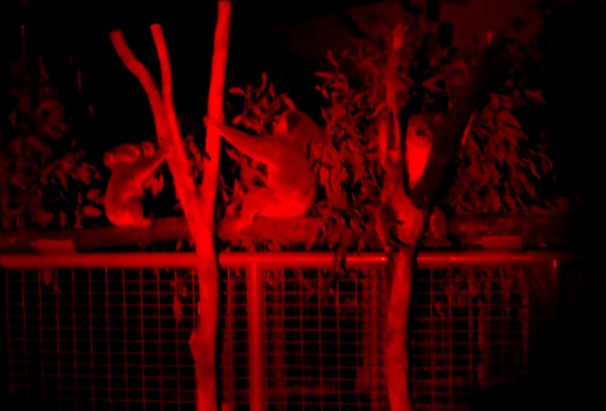 Staying at the zoo must be one of the biggest innovations since plans were put in place in the late 1960s to develop a large plains facility to complement Sydney’s Taronga Zoo.

It would provide breeding facilities particularly suited to the large plains-dwelling animals and fulfil a need for an open-range facility for the display of mainly grazing animals.

The site on the Newell Highway on the outskirts of Dubbo was transformed into a 300ha zoo of woodland and irrigated grasslands.

Western Plains Zoo opened to the public in 1977, featuring an open-range design with concealed moats effectively used to create the impression of actually being with the animals in the wild. 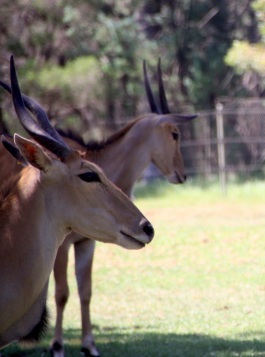 Today, it is like exploring the wilds of Africa – without needing a passport.

The highlight is the giraffe. Such an interesting animal, out of its time. Awkward yet graceful, long neck and spindly legs but able to glide across the plains, reach the high leaves and blend in with the bushland.

The same with the rhino, hippo and elephant.

They remind us how insignificant man is in the scheme of things. These animals have evolved as species, surviving thousands and thousands of years. 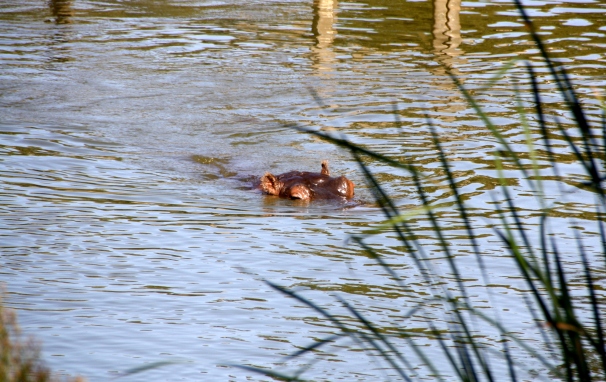 The hippo timeline seems to date back to the Oligocene period 23–34 million years ago, and the Anthracotherium. Now they are endangered.

There are so few rhino left in the world and it really shows how skewed our outlook is on the environment.

We are seeing the threat of this species becoming extinct in our lifetime. 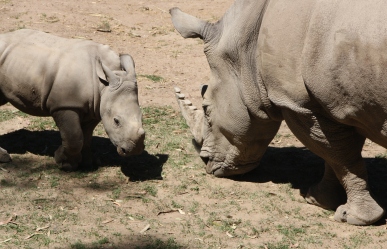 And that is why the work of organisations such as the Western Plains Zoo and our own Australia Zoo at Beerwah is so important.

These facilities get us up close and personal with our environment rather than the virtual world of traditional and social media.

How many “likes” does it take to save a species from annihilation?

Apart from the obvious – the zebra, camels, eland, spider monkeys and ring-tailed lemur – the zoo reminded me how much we are wrapped up in the sound of sulphur-crested cockatoos.

A surprise was the meerkat enclosure. These little animals, made famous by Timon in The Lion King, are so cute, whether peering out from under a rock, watching us as much as we watch them, burrowing or standing on lookout for the rest of the troop. 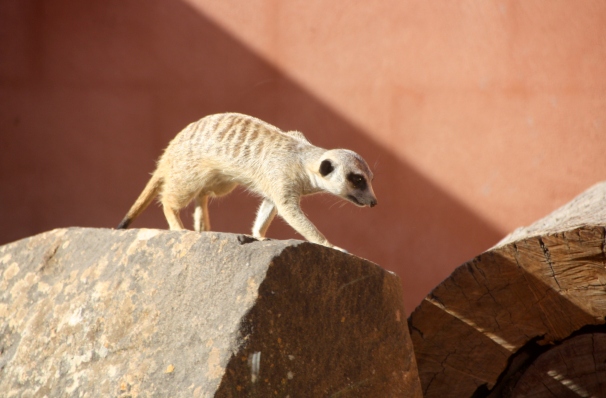 The zoo is easily accessible, being right on the highway at the entry to the city.

You can experience Aussie bush or the more luxurious African plains camping. It attracts all types and ages.

Sharing the campsite that night was a young family from Sydney’s southern suburbs who had driven out that day, a grandma from Canberra who was travelling Australia, another family from Cairns meeting up with their mother from a small place near Bathurst, a Queenslander just back from hiking in New Zealand, and international visitors from the UK and even South Africa.

Go to sleep with the roar of the lions. Wake to the distinctive call of the white-handed gibbon – a whooping almost like a police siren or fire truck.

Then there is the siamang family of apes. A deep drumming from the female that is answered by the male, then the youngster joins in and they carry out a set piece – a dance The Jackson Five would be proud of.

The gibbon is so curious, so athletic in the way it swings through the trees, testing the branches before the family follows, the white hands to help it of a night or early morning. Adorable. 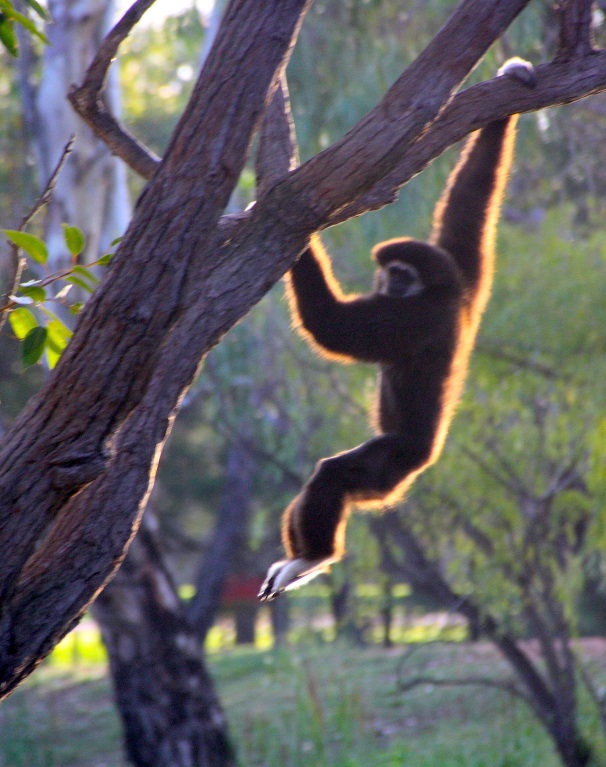 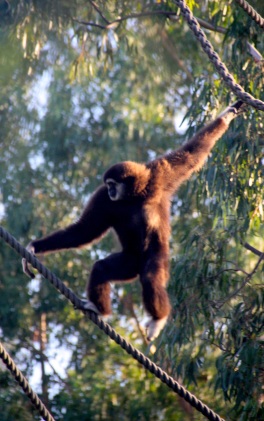 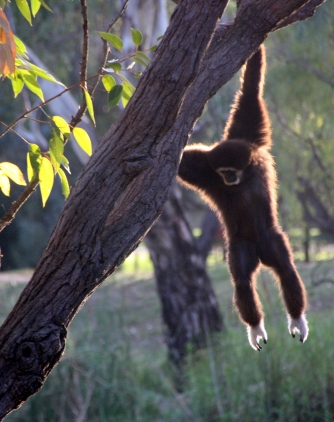 As part of the overnight stay, you are entitled to a two-day pass to the zoo. Yet there are also added talks and behind-the-scenes tours.

As well as trained keepers, these up-close-and-personal encounters are conducted with YATZ (Youth at the Zoo) participants, aged 13 to 18 years and generally high school students who use the role as a career lead-in.

We all know the blue tongue lizard but why does it have a blue tongue?

In the wild, the colour blue symbolises venom. It’s a bluff but it’s their way of getting out of sticky situations, especially with birds of prey.

Blue tongues are good to have around as they eat the eggs of snakes.

There is another animal at the zoo that has a blue tongue, but that is a protection against sunburn. Can you guess what it is?

Dubbo undertakes a key role in national and international programs for rare and endangered species, including breeding programs for black rhinoceros and cheetah.

The zoo has also recently welcomed the birth of a przewalski’s horse foal. The breed is also critically endangered and once declared extinct in the wild.

It has welcomed a second giraffe calf, born on February 1, 2016.

Giraffe numbers in the wild have been decreasing in the past decade, with a 30% drop in numbers directly due to poaching for bush meat and habitat encroachment by farmers.

Australia’s first greater one-horned rhinoceros calf is now at the zoo, the result of more than 15 years of work.

The species is classified as vulnerable, with as few as 2700 in the world.

The sumatran tiger is critically endangered. In two to three years, they are expected to be extinct in the wild from environment depletion through housing, forestry and mining.

A solitary animal, they have a bleak outlook.

The sad thing is, even if everything stopped today, it’s probably too late.

The only thing places such as the zoo can do is breed them and get cubs from the unique bloodlines.

Everything spent at the zoo goes back into helping animals through care and conservation.

Without places such as this, many animal species simply would not survive.

Getting around the 6km loop is easy by bike, electric carts, driving or walking.

The information centre overlooks a savannah lake and primate islands.

You can eat at Bakhita’s cafe or the Midway kiosk.

Plan your day around the many tours, encounters and information sessions.

The Billabong Camp at lets you experience nights under the stars on the banks of a billabong. Tents accommodate two or more, there is a camp kitchen and a block of amenities that resemble your personal ensuite. Dinner, breakfast and supper are included.

Wake up with giraffe and other exotic animals from the savannah outside your door. The African-style tented lodges are next to a guest house with fully licensed bar, lounge room, library and saltwater swimming pool.

They feature a king bed and double bath, along with private deck and include two behind-the-scenes tours. Rates are per person per night, twin-share: with bushland view or with savannah view and include wine tastings from the region, African banquet and breakfast.

Savannah cabins can sleep up to six people.

Staying at Billabong or Zoofari entitles you to many tours, discounts and additions to make the experience more complete.

Tips: Visit weekdays as weekends and public holidays tend to be busy. And try some of the behind-the-scenes tours.