FROM London to Longreach … it’s a long flight in anyone’s book. But Qantas Founders Museum CEO Tony Martin wouldn’t have it any other way.

Standing inside the heritage-listed Qantas hangar at the Longreach Airport he tells me about his life journey, one that has taken him virtually to the other end of the Earth.

Originally from London, it was such a coincidence Tony should find himself at the museum that follows the story of Qantas as one of the world’s great airlines.

After all, the London-Sydney flights by Qantas were regarded as the backbone of the airline, one that has built itself a reputation envied around the world.

Qantas is one of the oldest airlines. Founded in Winton, Queensland, on November 16, 1920 as Queensland and Northern Territory Aerial Services Limited, it has gone from two fragile biplanes carrying two passengers and a pilot to Airbus A380s flying 450 people around the globe.

Tony’s journey saw him land at Longreach in 2008, 11 years after moving to Australia.

Like so many others, he arrived in Sydney and after earning a tourism degree through University of Western Sydney one of his first roles was to be part of the start-up of Sydney Harbour bridge climbs.

The success of that saw him poached to start similar climbs of the Story Bridge in Brisbane.

Little wonder that a wing walk on a Boeing 747 is now a highlight at the Qantas museum at Longreach.

From Brisbane, Tony’s next move was to Bundaberg as his wife Nicole Bond was chief of staff for ABC News Western Queensland.

Yet Australia had not been not top of the list for Tony, having been a solo traveller from the age of 16. That was a time when aircraft cabins were filled with cigarette smoke and few restrictions for carry-on luggage.

“I had many adventures and many countries with different careers,’’ he says.

“The reason for Australia not being high on the list was the similarities in culture – it didn’t seem that different to home and there were more diverse cultures and countries to experience first.

“I finally graced these shores and soon found myself working on one of the most iconic structures in the world as a tour guide.

“I used to pinch myself every day to realise how lucky I was to be working in a fabulous industry in one of the most beautiful harbours in the world.’’

Not only that, he actually met Nicole in Sydney as she was a tour guide on the bridge as well.

Standing in the hangar next to one of the initial Qantas planes I ask him what he loves about Longreach.

“The fact you can walk to work in winter. I love it here, it takes two minutes to get home.’’

He explains that Qantas Founders Museum will be 20 years old this year and Qantas itself will be 100 years old in 2020.

“A heck of a lot of work is going into that,’’ Tony says, “mainly research.’’

He was at the Qantas head office at Mascot in Sydney recently talking about ideas for the anniversaries, how to partner with them.

Among the projects being put together is an interactive story profiling the people involved in the airline from the founders to modern day.

“We are collecting stories all the time,’’ he explains, “the pilots, women, ground crew, pioneers, indigenous, engineering.

“There are so many exciting stories out there waiting to be told.’’

Surprisingly Tony has never flown business or first class. Yet he dismisses it, saying the museum is a not-for-profit community group and registered charity.

The galvanised iron hangar at Longreach is where Qantas started its operations in 1922. But the airline’s story started in 1919 when two World War One airmen, Hudson Fysh and Paul McGinness surveyed an air route from Longreach to Darwin for the first England-Australia Air Race.

As they travelled the black soil plains with few roads between remote communities unconnected by rail, they realised the potential for an air service for mail, freight and passengers.

With funds from local graziers including Fergus McMaster, they established Qantas. After the first board meeting at Winton all operational activities were transferred to Longreach, and in November 1922 Hudson Fysh and mechanic Arthur Baird flew from Longreach to Cloncurry with their first official passenger, 87-year-old Alexander Kennedy.

Qantas built their own planes at the Longreach hangar, and it was a US Air Force base for their Boeing Flying Fortress bombers in World War Two.

The museum’s collection incorporates four of the world’s most significant airliners – the Catalina Flying Boat, the Douglas DC3, the Boeing 707 and the legendary Boeing 747.

In addition, there are full scale replicas of some of the most important aircraft in the early Qantas fleet – the DeHaviland DH-61 Giant Moth, the DeHaviland DH-50, and the Avro 504k Dyak – Qantas’ first ever aircraft.

Between 1926 and 1928 Qantas built several aircraft in Longreach and made the inaugural flight of the Royal Flying Doctor Service of Australia, departing from Cloncurry.

The museum is home to the world’s only Bristol Fighter simulator, the aircraft Qantas founders McGinness and Fysh flew together during World War One

And a Lockheed Super Constellation, similar to those flown by Qantas Airways in the 1940s and 1950s, is headed for Longreach.

The Constellation is an iconic aircraft in the history of Qantas and Australian aviation as it operated the Kangaroo Route between London and Sydney from 1947.

The Constellation was the first pressurised aircraft operated by Qantas and the first in which they had flight hostesses.

So secret were the Catalina missions in World War Two that aircrew were “hidden’’ in the community in everyday roles. No-one was allowed to know their top-secret missions which were to keep communication open between Australia and the UK. 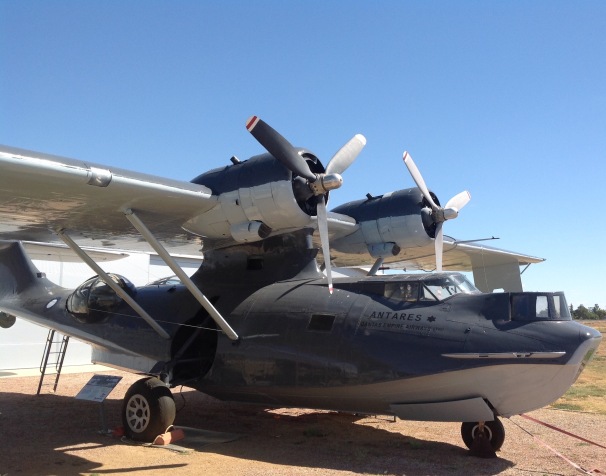 The Catalina still holds the longest world record for silent flight – flying by celestial navigation and in radio silence.

“The idea of the founders museum was born in 2001,’’ Tony says. “We did not fit into the Stockman’s Hall of Fame as it was not the stockman culture so we started funding and sponsorship.

“We are getting there. Last year we won six awards, from major tourist attraction to heritage awards.

“Thousands and thousands of tourists are coming to visit.

“It’s an amazing team here. We are sustaining the economics of the region, the culture.

“It’s because of the community. We are the custodians of such a wonderful story.’’

Having been involved with two Australian icons in Sydney Harbour Bridge and Qantas, Tony says he is very lucky to do what he does.

“How it affects our community is terribly important. Over 90% who come here come by road and they access everyone in our towns .. the butcher, the baker.

“ Tourism is so great, not just to tell stories but to the sustainability of our communities.

“When you think about how challenging those overland car bush bashes to Darwin were, Qantas could have finished up like Burke and Wills.

What surprised Tony about life in Longreach was that before coming to Australia he had read a lot about this big country Down Under.

“I loved the indigenous history and the pioneers … what drove them to this area, what sort of person undertook such a challenge.

“In Sydney, all those moments fell into place.

“This is the real Australia … the land of the pioneers, the land of Burke and Wills, Banjo Paterson and Waltzing Matilda.

“As a national airline, you have to admire what an amazing group of people did.’’

The Qantas 747 at the entry to Longreach is the biggest billboard you will come across.

It’s the tallest building in this town of about 3000 people.

“You can see it for miles,’’ Tony says. “It’s about three storeys high.

“I love it out here. You never lose your car keys, never know where house keys are … they are never locked.

“We don’t want for anything. All three of our children Sidney, Archie and Bonnie were born in Longreach.

“For three years running Longreach has won the best maternity unit in Queensland.

“It’s a wonderful place for children to grow up, they get a real appreciation of what this land can do.

“I like how bush kids have a ruggedness, durability about them. They can cope.

“We go camping a lot. They learn respect, they are aware of what to look out for.

“We cannot wait for lights to go out to enjoy the million-star outlook. 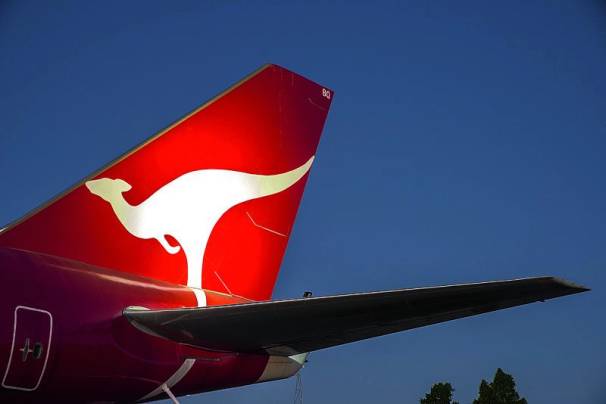