The search for wisdom and knowledge 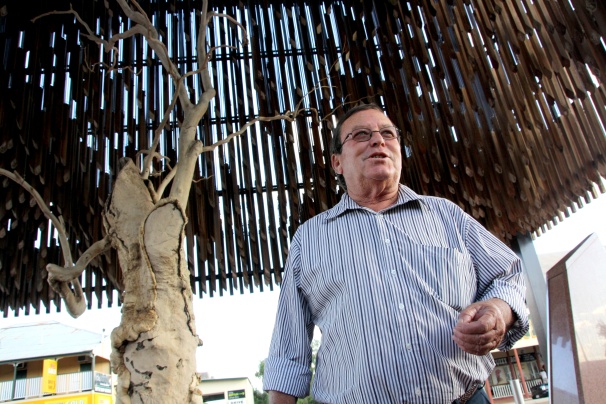 Barcaldine Mayor Rob Chandler at the Tree of Knowledge which  is deeply defined in Australia’s history.

THERE is one thing Outback Queensland offers apart from its well-known bush hospitality, the country air and big skies at night … it’s history.

Barcaldine Mayor Rob Chandler sums it up well when he says: “We are Australia’s history. Australia grew from inside out when it opened up the outback.’’

There are few better places to understand a chapter in Australia’s history than at the Tree of Knowledge in this town that was built on sheep.

And there is no better way to fit into the laid-back way of life than pronouncing the name of the town correctly … Bar-call-dun.

In 1891, the ghost gum directly in front of the railway station witnessed a divisive confrontation that threatened to plunge the nation into civil war as striking shearers stopped non-union labourers arriving by train to fill their jobs.

The strike was a bitter campaign fuelled by the lowering of shearers’ conditions by sheep station owners.

Now, 125 years later, a dramatic reconstruction of the seven-metre high tree stands outside the station where visitors are welcomed, with tourism being an integral part of the Barcaldine Shire’s economy.

The anniversary on May 1, 2016, was highlighted by a town party and street parade.

Yet in 1891, the wool industry was the unrivalled economic pillar of the colony of Queensland.

Striking shearers marched under the Eureka flag to put forward their protests against poor working conditions and low wages.

The memorial to the Tree of Knowledge in all its glory at Barcaldine, Queensland.

In a 7.30 Report broadcast on ABC TV in 2009, historian Peter Forrest acknowledged that the Tree of Knowledge was important, and Barcaldine itself was tremendously important to the history of Australia.

Forrest, who was commissioned by Barcaldine Shire Council to write the history of the Tree of Knowledge, said all that ever happened around the tree in terms of the strike was the gathering of unionists to prevent non-union men getting off the train at Barcaldine, and there were often scenes of angry confrontation there as that happened.

In 1991, the tree was found to be suffering from dieback but in an act of vandalism, it was poisoned with glyphosate in 2006.

Two years later, the tree was successfully cloned by workers at the former Queensland Department of Primary Industries.

Several cuttings propagated from the tree before its death are now growing in Barcaldine, as well as Brisbane and at the National Arboretum in Canberra.

A new memorial on the site of the remains of the original tree won the Lachlan Macquarie Award for Heritage Architecture and a National Commendation for Public Architecture at the 2010 National Architecture Awards.

To stand beneath the timber construction above the trunk and exposed roots brings an awareness of the struggle of those early workers and settlers.

Chandler, who was born into a sheep and cattle grazing family, sees tourism as the saviour of western Queensland.

After leaving school, he went shearing, then ran the family station until extreme drought and a collapse in wool prices forced a change.

He started a timber-cutting business, then hospitality, first with a farmstay then a motel in town.

As well as mayor, he has been a long-time board member of the Outback Tourism Association, a prime motivator behind charity organisation Angel Flight and its annual Outback Trailblazer event.

“Tourism is the future,’’ Chandler says. “The drought is hurting everyone.

“Making visitors welcome is what it’s about.

“We have to make them feel they are part of the survival of the bush, which they are.

“Every quarter to half mile, the country changes.

“You could spend every day in the bush.

“The Tree of Knowledge is one of things people have to do.

“The fact you can see when the lights are on the shape of the tree as it was from 1896 is pretty special.’’

Almost $2.5 million has been spent on the redevelopment of the iconic hotel, now known as The Globe Visitor Information Centre.

The pub, which was built in 1910, was bought by the Barcaldine Regional Council, and now includes an art gallery, function room and history room.

There are also plans to continue developing the site with a library and a theatre in years to come.

Chandler says that when excavating the dead tree, they kept the root ball and eventually the excavation went down to hand-held garden trowels.

That’s when they heard a “ching’’ and unearthed a plaque with the inscription: “Robert Woolford 1950-2000. A true believer.’’

Chandler asked ABC Radio’s Ian McNamara about it and a lady rang from Cairns, saying she had buried his ashes there.

“I don’t know any more about it but he must have been a working man,’’ Chandler says.

“Robert Woolford’s plaque now remains at the base of the tree.’’

Being part of the Great Artesian Basin means Barcaldine has unlimited water and with its red sandy soil has earned the title: Garden City of the West.

“I think it’s pretty special,’’ Chandler says. “We have so much more than many other places.

“It is a wonderful place to visit. A great little place.

“People say friendly this and the other. We have some of the best drinking water in Queensland.’’

Barcaldine gets 400,000 visitors a year on the Landsborough Highway, not just grey nomads but anglers going to the Gulf of Carpentaria, transports heading to Mt Isa, Darwin, Rockhampton or Cairns and the Atherton Tableland.

Cheryl Thompson at the Ridgy Didge Cafe in Barcaldine.

Tree of Knowledge Festival organising committee member Cheryl Thompson is part of a committed group to further expand indigenous art, craft and culture into the economy as it is home to one of the biggest sites in Australia for rock art and carvings.

The Central West Aboriginal Corporation is an incorporated not-for-profit organisation with its head office in Barcaldine.

Members are proud of its facilities including the Clydesdale Farm or Spirit Place on the Alice River that is used for cultural education, camping and tourism activities.

The Red Shed in Boree Street is a cultural, sports and training centre where locally hand-made ceramics, artefacts and paintings are produced.

Thompson, who is a school teacher, also runs an Aboriginal student hostel for children from outlying areas such as Boulia, Camooweal and Mt Isa.

“It’s a 24/7 school camp,’’ she says. “If I can get them educated and get a job, they can replicate it in their communities.

“How good would that be.

“Closing the gap is about people like me having opportunities and passing that knowledge on.’’

Alan Smith, of Outback Aussie Tours, was born at nearby Blackall and believes it’s not just what you see, it’s what’s under the land that makes the area so special: the artesian water, the different soils, the trees, the grasses.

Meanwhile, Chandler talks passionately of what is on offer and what is planned all through the area, noting $100million in infrastructure just finished or about to start.

Ergon has gas-fired power and a steam turbine from wastewater and gas exchange. Plus, there are plans for an 80,000 panel solar farm that would make it the largest in the state.

“A long time ago,” Chandler says, “R.M. Williams told me: ‘You have to make decisions. If you don’t, nothing will happen’.”

With the Australian Workers Heritage Museum at the centre of town as well as the historic Radio Theatre that was built in 1926, things are certainly happening in Barcaldine.

More information about the Tree of Knowledge can be found on www.treeofknowledge.com.au

Barcaldine’s Radio Theatre which was opened in 1926 and still plays a significant part in the town’s arts, entertainment and culture.

TEN THINGS TO SEE AND DO 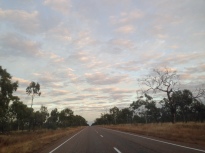