The Footsteps of Giants

The Age of Dinosaurs Museum at Winton, Queensland.

Nothing is more important than understanding how our Earth works. And to do that we need to understand where it’s been.

David Elliott knew two things when he saw a funny bone in a paddock in 1999, the femur of a dinosaur.

Being a third generation sheep and cattle farmer from the Winton area, he knew the soil. And he knew he had found something big, in more ways than simply the size of the bones.

“We have been here for a matter of seconds of time in the grand scheme of the universe,’’ he says, looking toward a dramatic red sunset over the western plains.

“The greatest thing we could do for the community is show them off.”

Australia needs its own natural history museum, he maintains.

“The states have their museums but they do not have one that stretches from the birth of this continent.

“Collecting fossils tells the story of Australia … children can come here and see how our country has evolved.’’

The Australian Age of Dinosaurs at Winton tells the story of Australia. From 100million years ago when dinosaurs roamed on the edge of what was a giant inland sea.

The museum is on top of the Jump-Up site, 1801ha of freehold land about 12km south of Winton. It is predominantly a 75m high mesa that provides a natural flat-top plateau 7km long and 2km wide, a wilderness area surrounded by steep cliffs, massive boulders and deep gorges.

Walking trails, stunning views, and an abundance of natural flora and fauna make it an outstanding destination in itself.

But this evening we are standing on top of the cliffs, looking toward the vision David has for the expansion of the museum.

People are voting with their feet by showing their interest in the facility, he says. And last year saw 27,000 visitors to the site that is about 11km off the highway.

The vision splendid … The view from the Age of Dinosaurs Museum at Winton, Queensland.

The Australian Age of Dinosaurs was formed at Winton following a public meeting in 2002. Since that time dinosaur digs, primarily in collaboration with the Queensland Museum, have led to the discovery and recovery of what is now the largest collection of Australian dinosaur fossils.

“It is growing so fast that sometimes it scares me,’’ he says. “We had 370 (visitors) on one morning of an outback festival.

“It’s authentic. People who come here have a fantastic experience and tell their friends about it.’’

Such is the popularity of the museum that a $30 million stage 3 is in the planning and preparation stage.

The first visible steps toward the dream include 10 life-size bronze dinosaurs, all created using as a guide fossils found in the past two decades in western Queensland.

David outlined the expansion program to us at a dinner under the stars in front of the existing reception and information centre.

At present a visit to the museum includes tours of the information/display centre and the museum/restoration laboratory. There is time in between to appreciate the magnitude of the find as well as the vast expanse and rugged beauty of the surrounding area.

A dinosaur canyon, incorporating outdoor galleries and life-size bronze dinosaurs, will be scattered throughout the gorge that sits below the site of the future building.

This is the biggest single step the project will take and it includes the development of comprehensive education programs, teacher development courses, overseas study tours and scientific research programs. 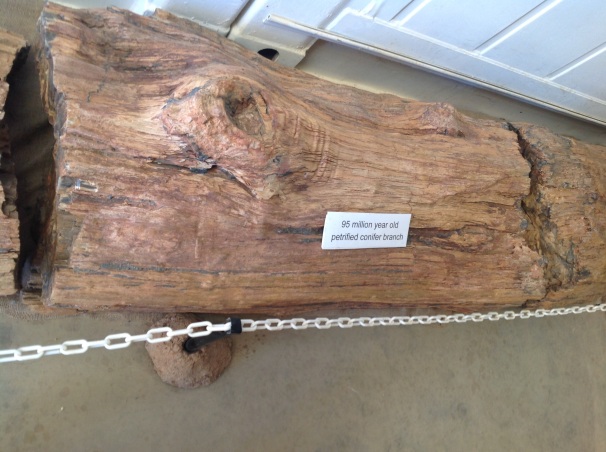 As well as the collection, preservation and display of palaeontological artifacts, the museum hosts digs for interested volunteers. These are held in a 150km radius of Winton.

The museum is not a pipedream any more for David. Western Queensland is the richest area for finding big dinosaurs.

These are from the late cretaceous when flowering plants were just starting to evolve. They also find marine fossils from the ancient inland sea that stretched from the Gulf of Carpentaria to Lake Eyre.

Age of reason: A giant nautilus shell gives an indication of the size of some of the fossils that have been found in what was a giant inland sea in the heart of Australia.

Once David found that first bone he knew the soil would give up more because it is self-rotating due to the high clay content.

Such is the success of the dinosaur digs the restoration and management laboratory cannot keep up. Three weeks of collection is enough for a year in the lab.

The dinosaur digs result in volunteers examine the finds in minute detail then cataloguing and preserving them for future study.

The excavation work starts with front-end loaders then works down to paint brush, screwdrivers, rakes and spades. The bones are tagged and sealed in protective plaster jackets.

“We always thought about building something here rather than see them go out of the area,’’ David says.

“I realised there was an opportunity not just for Winton but western Queensland.

“This was a real life change. Up until then sheep farming was my life. Now my boys taken farming on and my life is here.

“Look at where it’s come and it still keeps growing.

“You cannot build something big for millions of dollars and hope it will be a success. In small business you do what works, then you can grow from there.

“Consolidate as you grow, develop a client base because there is a need for it. That’s what we are doing here.’’

The Age of Dinosaurs started with a shed and a gravel road in that was an election promise of then Federal treasurer Simon Crean. That has been added to with the Queensland Government promising $7million to seal the access road.

The road in from the Landsborough Highway to the Age of Dinosaurs, just south of Winton.

“The reception centre will remain that, but we have started on the dinosaur canyon,’’ David says. “It will have life-size dinosaurs on display in the wild.

“Eventually it will be a $30-40million museum that will keep growing, changing.

“We have found enough dinosaurs this year to let us keep working on them three to four decades.’’

Part of the expansion is to take over management of Lark Quarry, about 100km south west of Winton.

Lark Quarry Dinosaur Stampede is a National Heritage Listed Monument, internationally acclaimed as the best example of running dinosaur tracks in the world.

Meanwhile the Age of Dinosaurs Museum features the bones of three of these creatures, as well as the initial find which was a giant sauropod dubbed Elliot.

Banjo is the first known carnivore in Australia while Clancy is a long-necked plant-eating dinosaur and Matilda is thought to have been the largest creature to have walked the earth … 20-30m long and weighing 30 ton.

They were given the nicknames after the famous Australian poet Banjo Paterson and his characters, Paterson having written Waltzing Matilda in Winton in 1885 and also authored Clancy of the Overflow.

“These are older than anything in Europe,’’ David says.

“Our position (in Outback Queensland) is not a weakness, it’s what makes us special. Going there, seeing, feeling, experiencing.

“You won’t take Uluru to Sydney so why should we take this.

“I don’t have to sell the message, I keep working behind the scenes to help make it happen.

“And I’m glad to see how happy people are seeing it.’’ 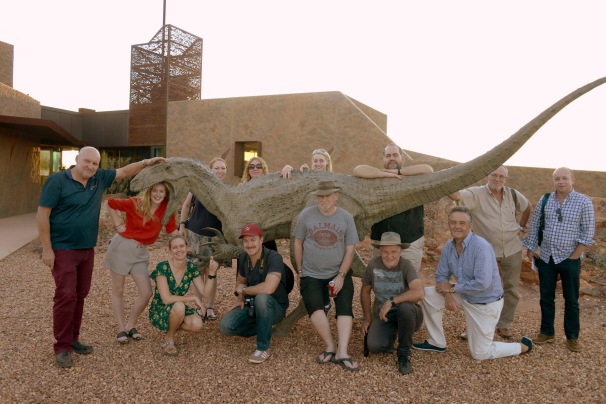