Ride of Their Life

The soft glow comes over the ranges in the east about 4.30 even though sunrise is not for another couple of hours.

The riders have been on the course since midnight. It’s cold. About four degrees but there’s no breeze.

The three-quarter moon hangs in the sky. There’s patches of light fog hanging around the lowers areas of the valley.

And while there’s a faint cover of white on the grass it is not a frost. 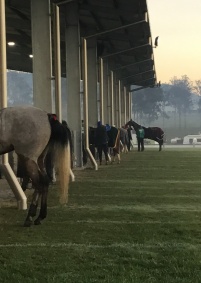 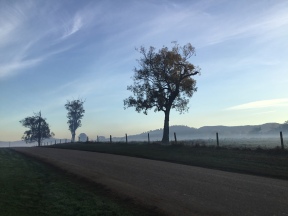 It’s the 2019 Tom Quilty Gold Cup, the premier equestrian Endurance even in Australia, with almost 300 horses and riders setting out on a 160km course through the Imbil State Forest in Queensland’s Mary Valley.

Stirling’s Crossing Equestrian Centre is the venue and the leading riders have already completed the first leg of the course.

Just on sunrise the leaders are heading back in again for the second vet check of the horses.

That is followed by a time for both horse and rider to rest, be fed and get ready for the third of what will be five out-and-back legs.

To complete is to win. So care and understanding of the horse and it’s fitness is paramount.

Recognising the conditions and terrain is another factor. 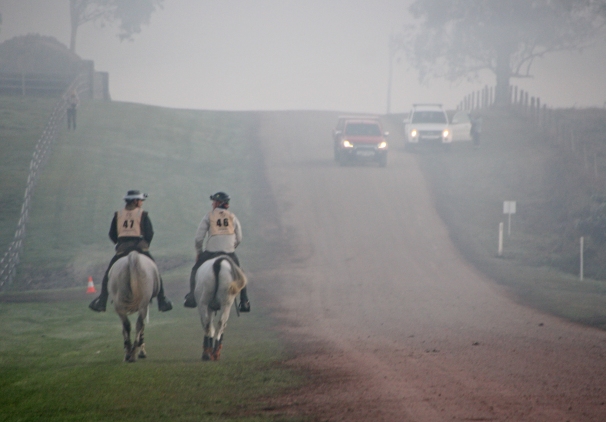 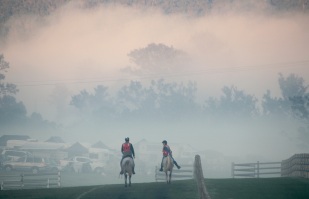 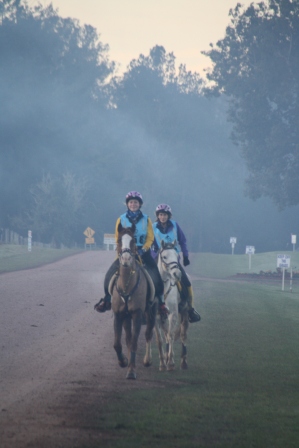 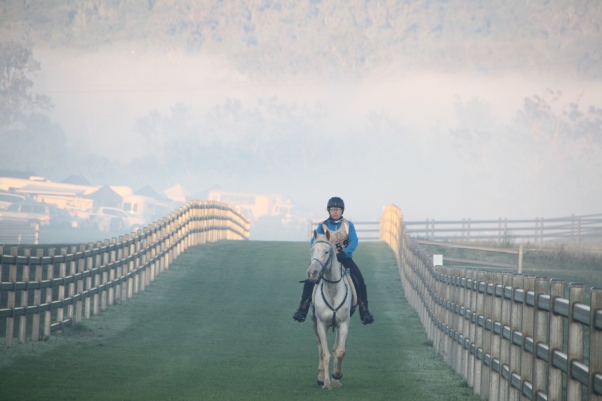 The cold night has been kind to the horses in regard to their biology, not over-heating. The riders are rugged up, their head torches showing the way through the forestry trails that wind their way through the valley.

The Quilty is held in a different Australian state each year with different conditions to test both horse and rider – particularly their capacity to work as a team.

They are competing in a number of divisions – light, middle and heavy weight, as well as juniors.

Riders need to be 12 years and older and having successfully completed a range of endurance events in order to qualify. It’s the same with their mounts.

I watch the horses and riders at the vet check. The leaders are coming through. If they pass there’s time for a rest, some food and something to drink.

The rawness of the moment … of horses and rider relying so intimately in each other … is as if you have been transported back in time.

Mary Valley rider Kaylea Maher is among the first to check in with the vets, to get the horse’s heart rate measured, then a run-through to see if there is any sign of lameness.

I have seen Kaylea at a number of endurance events at Stirlings Crossing over the years and in the first light of dawn remark on how calm and relaxed she is.

The hot breath of her horse Matta Mia Dimari swirls in the chilly morning air. Steam rises from the horse’s back, made more pronounced by the backdrop of the green paddocks still coated in the overnight dew. 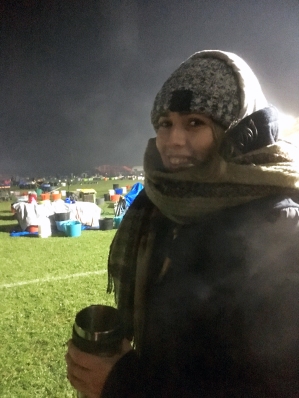 Stirling’s Crossing Endurance Club is hosting the ride and president Kim Moir has watched Kaylea through her career.

“Kaylea has had an impressive endurance record having completed 122 official rides covering over 11,600km to this point, as well as taking home the lightweight title at the Tom Quilty Gold Cup three times in the seven years she has competed,” Kim said.

“She’s been riding since she was a young girl and now dedicates her time to training endurance horses, something she does incredibly well as seen in her performance in the Tom Quilty.”

Nikki Scott is vetting at the same time as previous Quilty winner Matt Sample, and like Matt she is an Imbil girl … living a few kilometres down the road.

It’s her first Tom Quilty and she’s so happy with the way it’s going.

Nikki Scott of Imbil at the vet check with Anglesea Finneas. Photo: leavearly@icloud.com

Nikki is riding in the lightweight division and enjoying the cool night.

“We are so fortunate with the weather,” she tells me. “The moon was beautiful and the clear skies made it even more so.”

The likelihood of a fine, warm day has been part of her planning.

‘’I’ve prepared my horse for the warmer part of the day by not going too fast at the start and setting a nice pace.

“We have a saying ‘Walk in the shade and trot in the sun’.’’

Matt Sample was joint winner of the Tom Quilty at Tonimbuk, Victoria, in 2009, crossing the finish line with brother Brook who has seven wins under his belt.

Their father, Bob took home the Tom Quilty Gold Cup in 1993 in Tasmania.

Simon Bain from Murrumbateman, New South Wales, had the doubtful privilege of being oldest rider, and at the half-way mark of the event joked he was not sure if that was something to rejoice in.

Simon was a fourth-year vet student at the University of New South Wales when the first Tom Quilty was held in 1966.

“I saw the start and thought I’d like to be a involved in that one day.

“Prior to that I had seen the Sydney three-day event, which was an Olympic selection event, and thought I’d like to do that too. So I entered for a number of years, which Australia has been very good at.

“In 1977 I got into endurance, for three years, then for family reasons gave it away for a while. 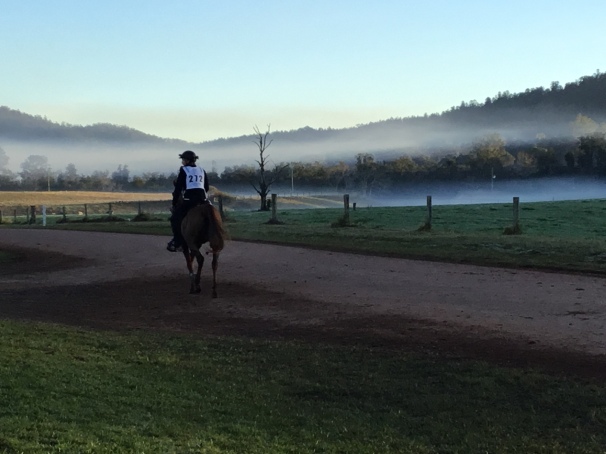 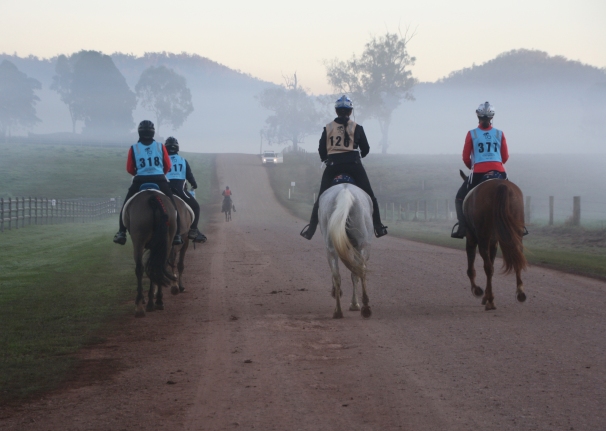 “It’s not hard to keep a positive mindset. You have a tremendous bond with the horse. Forever you are thinking about the horse’s welfare.

“There’s much more management in riding endurance than there is in any other equestrian sport. Because you have to present that horse at each leg to the vets and get through the vet check.

“You have to monitor how fast he is going and think how fast his heart rate is. Look for holes in the ground to make sure he is not injuring himself.

“If they’re a little bit lame they’re out.

“It’s like being a little bit pregnant – you can’t be. You are either lame or you’re not, so you’re out.

“You have got to manage that horse on every leg, especially towards end of the ride. I’ll probably go quietly from this point to make sure I complete it.

“For me at this age the big thing is to complete the ride and get the buckle. In a younger age I was very competitive and trying to win rides.

“Getting older, I’m now more conservative. I just want to get through.

“He’s very fit, I’m pretty fit for my age I think. I hope for no setbacks. We should go alright.

“To any endurance rider it’s one of the five toughest rides in the world.

“To an Australian it’s the sort of Bradman of endurance riding. It’s as far as you can go, it’s the pinnacle. 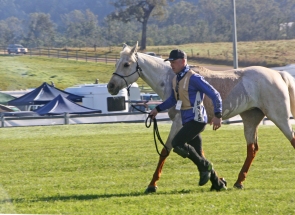 “The juniors are great. One of the great things about this sport is that me, at 77,  can be riding alongside a 14-year-old.

“You sort of give them a bit of advice. Generally they’re children of people who have ridden so they are well versed in what to do.

“They’re very responsible. I honestly have not seen one in recent years who has not looked after their horse pretty well.

“The big thing is to look after your horse, form that bond. That’s the big thing about this sport – to bond with the horse.” 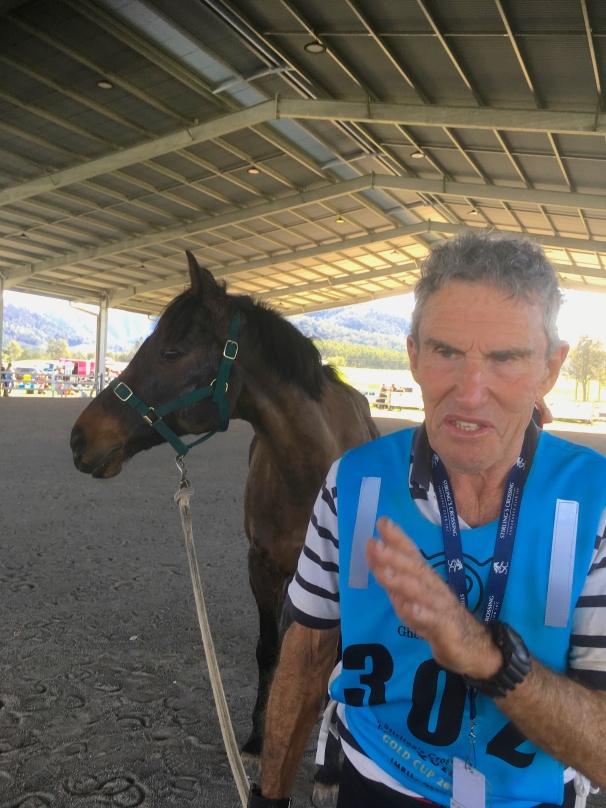 As the day warms up the fog lifts and the wind increases, making conditions warmer for horse and rider.

The teamwork becomes evident as the strappers and support crews help get competitors into the vet areas then into the rest areas. 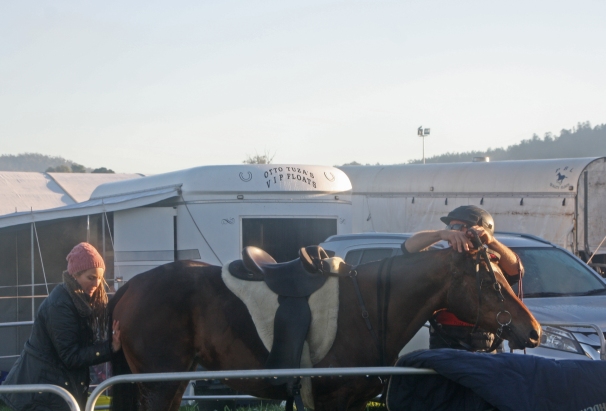 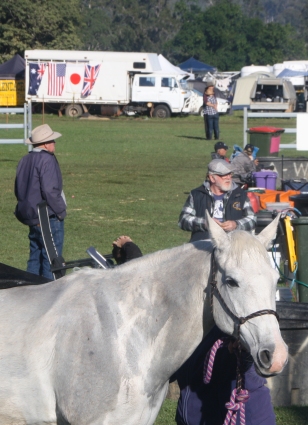 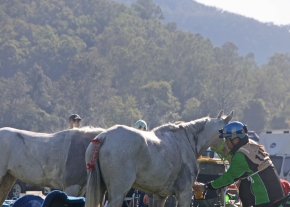 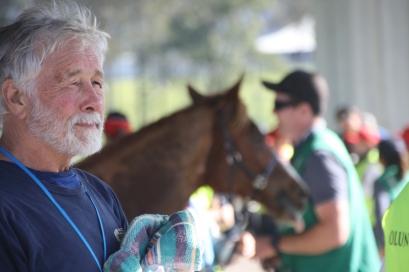 In the end it was Kaylea Maher who got to fulfil her dream of holding up the Tom Quilty Gold Cup when she completed the 160km ride in 10 hours and eight minutes.

The mother of two said while she was hopeful of taking out the win, there were so many factors that influenced the end result.

“Every ride you just take as it comes, as you never know what the end result is going to be. 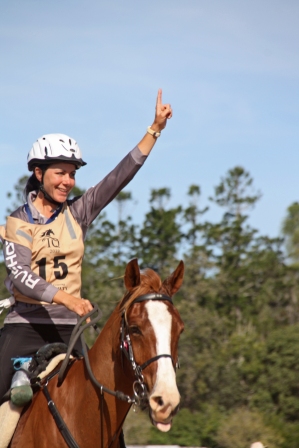 “You always have to have hope in your horse and believe in your horse, and that’s what we did. We believed in each other and we worked through all our challenges and he came home really strong. I’m really happy with his achievement.”

“Credit goes to the people at home in our stable, they do a fantastic job of looking after him and yes, it’s a lot of hours and a lot of time; a lot of tears and sweat that go into getting a horse to the condition they need to be in to perform on the day. And that’s what we’ve seen, the hard work’s definitely paid off and I want to thank everyone who’s helped me get here. 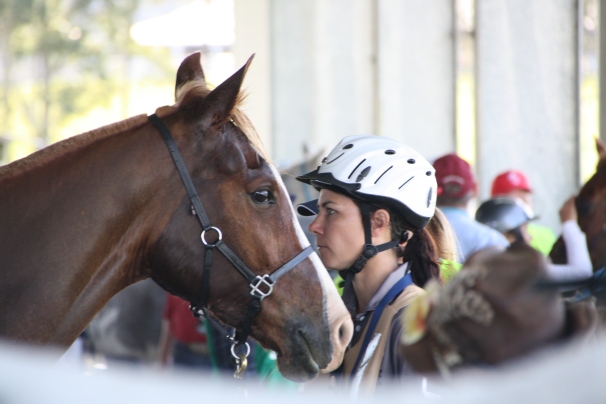 “It doesn’t matter if you’re at home or away, the competition is still there but to actually pull it off on home ground with the support from all my family, my friends and my team, I guess that’s where it feels good to have this win on home ground.”

“The first time I saw this horse I had a connection with him and I always believed from the first time I rode him, that he could take home the Gold Cup.

“I worked with him from day one on our farm and I had the goal set in my mind that I was going to work towards getting him ready for this 2019 Tom Quilty Gold Cup.”

Second place went to Jamie Green from Calico Creek and third place to Paul Bidei from France who both rode in the middleweight division. 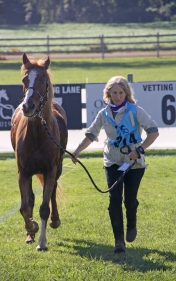 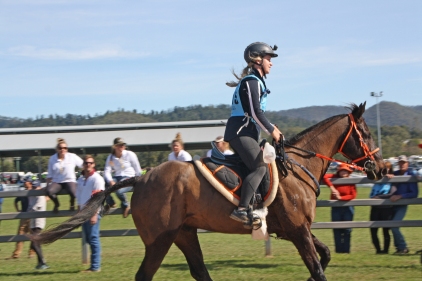 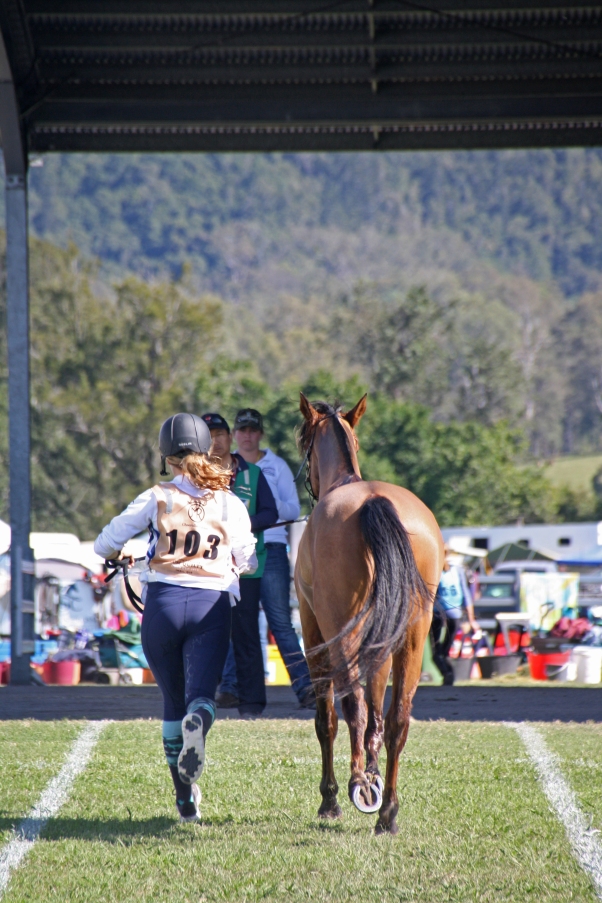 Jamie was riding No Regret Shocking, a locally trained horse out of his first pony.

“Pretty tired,” was how he described the feeling after crossing the finish line, “but the horse is feeling well.

“It was challenging, it was quite hard underfoot on a lot of the hills.

“It was a tactical ride, the heat definitely played a bit of a toll in the end.

“It’s a great feeling, it’s been a lot of attempts to get to the pointy end. It’s great to do it on a horse we bred ourselves.

“So it’s a bit of an achievement and a long road to get there.”

No Regret Shocking also took out the Best Conditioned Workout on the Sunday morning.

Jamie said there was not one secret to good endurance riding.

“There’s definitely a lot of time and effort to find what exactly works for each horse.

“That’s what makes the difference, the details to get the great result.”

And participation in such an event is slightly different for everyone, he said.

“It’s the the challenge and team work of rider and horse.

“It’s a unique sport, especially that there is no prize money.

“It’s the challenge, the journey as well … and when you finally get across the line, the feeling at the end.” 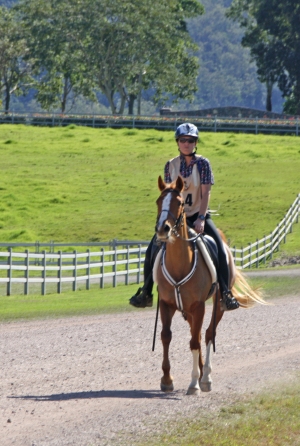 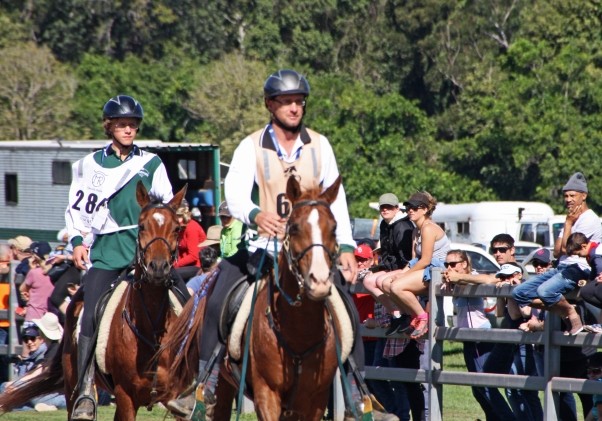 There was much excitement for the Cole family from Panuara, NSW when mum Jolene took out the heavyweight division while her 13-year-old daughter Emma was the first junior.

In the lightweight division Emma Dimech from Table Top, NSW was the top of the leader board while joint second went to Nikki Scott from Imbil and Floor Braunius from the Netherlands who rode a horse from Marburg, Queensland.

Floor had the ride of her life to achieve what doctors said would be impossible when she shattered her knee in a riding accident two years ago.

“I almost lost my leg three times during surgery and the doctors told me I could never ride a horse again,” she said.

“I made a promise to myself that not only would I ride again, but my goal was to ride in this year’s Tom Quilty. I rode Treasure TE from Toft Endurance stud who made it possible for me to achieve my dream.”

Nikki Scott came second in the lightweight division and was eighth overall across the finish line.

Results may still be subject to change and can be checked at www.aeraspace.com.au 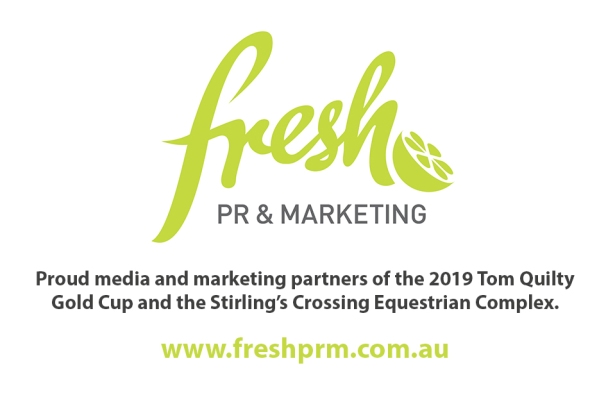 2 comments on “Ride of Their Life”