The Loneliness of the Chinese Gardener

Of spirit, resistance, and embracing the outback

His is a name that doesn’t hang on everybody’s lips. Yet it should.

A sad story that says so much about attitudes.

Willie Mar’s fruit and vegetable shop sits on the edge of town. Not just any town but one on the edge of recognised communities in Australia … beyond the town of Winton is the outback.

Winton is in western Queensland, where the rivers run inland … where life is already marginal. Yet once past the town limits, things become even more problematic.

It’s on the rim of what was once a great inland sea … when dinosaurs roamed the land. 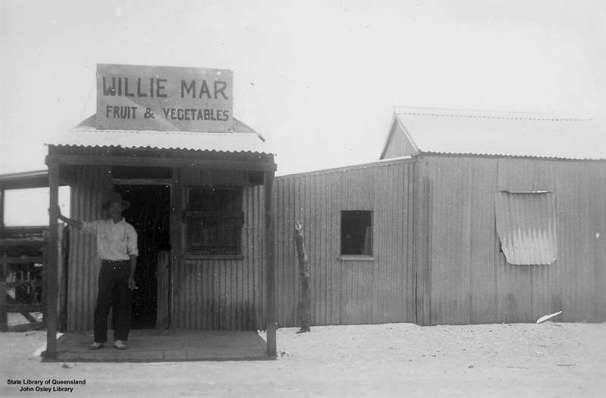 It was a time when the remote areas of Australia were still riding on the sheep’s back.

Grazing had come to these areas in the 1800s, employing many labourers either for shearing or caring for the stock and the land.

Since the 1870s Chinese men had been employed as cooks, gardeners or shepherds on these large pastoral holdings.

As Winton became established some of the Chinese moved into commercial enterprise and became market gardeners, shopkeepers and bakers.

Market gardeners worked in Winton as well as Pelican Waterhole, along Mistake Creek and Surprise Creek.

The Chinese had also been very industrious at the gold rushes throughout Australia, from Bendigo and Ballarat in Victoria to the Palmer River goldfields in far North Queensland.

But today, walking these streets of Winton in the early evening, the golden rays of the setting sun cast the town into a timelessness. 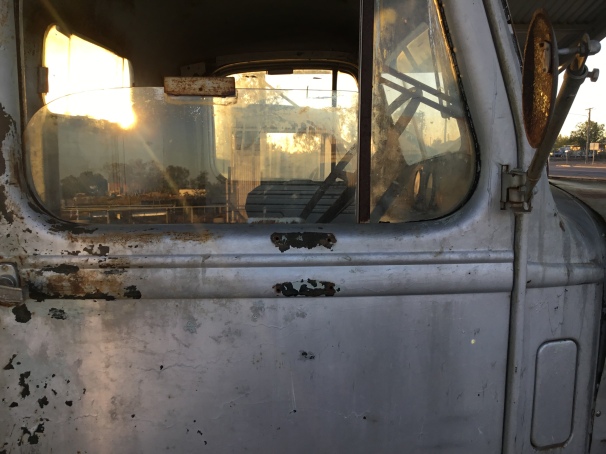 Willie Mar’s shop on the edge of town. On the edge of existence. Something seen but not heard. Grudgingly tolerated.

His life, and that of his family’s, was disadvantaged by attitudes.

Willie Mar arrived in Queensland from Zhongshan province in China at the turn of the 20th century.

He worked as a cook and gardener on a number of stations between Hughenden, Richmond and Winton before becoming a shopkeeper and market gardener in Riley Street, Winton.

He was married to a young woman in China but was rarely able to return home to visit her.

He only made two trips back. During an extended visit in 1929 a son, Yen Shoo, was born.

Willie returned to Winton not long after the birth and did not see his son again until 20 years later. That was in 1949.

Young Willie Mar (Mar Yen Shoo) had no childhood memories of his father when he arrived in Winton.

Unable to speak English and dependent upon his father, Young Willie Mar began to learn his family business of shop keeping and market gardening.

His new-found friendship with his father came to an abrupt end when Willie Mar died while working in his garden in 1954 at the age of 86.

Not Australian by birth and considered an “alien” by the Commonwealth, Young Willie Mar had to prove his business acumen to prevent deportation.

He was required to sustain and submit evidence of a sizeable annual turnover to continue his father’s business and keep living in Winton.

Determined to honour the family, Young Willie Mar exceeded his requirements every year for the next four decades.

His quiet, industrious and happy personality made him popular amongst locals and yet he remained a bachelor all of his life.

Denied the ability by the Commonwealth authorities to bring a wife out from China in 1960, Young Willie Mar continued to live alone for the rest of his life with his cats and chickens.

He returned only once to visit his mother and sister in 1983.

The fruit and vegetable shop, house and market garden was the longest operating Chinese market garden and shop left remaining on the edge of any western Queensland town.

A small band of friends in the Winton community are keeping his legacy alive. 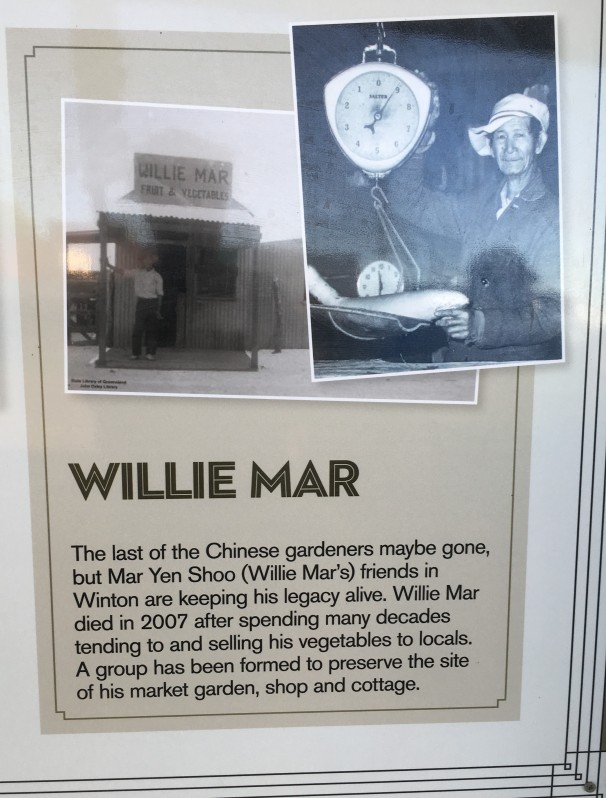 The garden, which had provided Winton with fresh fruit and vegetables since the 1920s when Willie’s father commenced operations, only ceased to produce commercially in 2000 when floods impacted heavily on the aging Willie and his garden.

Willie himself passed away in 2007, and many residents of Winton have vivid memories and engaging stories of Willie and his garden.

Although the fruit and vegetables are gone, Willie’s shop and house remain at the site, as well as evidence of the ingenious pond watering system common to Chinese gardens.

The Chinese skills and traditions of farming small patches of land with a continual crop yield became an essential part of community health and survival in many outback towns and the excellently interpreted Willie Mar site is a tangible reminder of this now extinct tradition.

Popular and well-loved by the community, the place reminds many locals of the ever-cheerful Young Willie Mar.

As you entered the small, dark shop, your eyes adjusted to a scene of wooden shelves stacked with boxes of fresh vegetables kept cool under damp potato sacks.

“Good day … you like?” Young Willie Mar would greet customers.

Selected fruit or vegetables were packaged in hand-made paper bags made from cut-out newspaper squares held together by flour and water paste.

Put your hand under the bag, watch the bottom.

Not only were vegetables sold from the shop they were also delivered three times a week on Tuesday, Thursday and Saturday.

Later he upgraded to a Nissan utility, beeping the horn as he pulled up.

Young Willie Mar was always reliable with his order.

He regarded the new refrigerated carriages on the train as an opportunity to freight additional fresh vegetables and fruit from Brisbane on a weekly basis.

Meeting customer needs yet remaining completely understated, he maintained a reputation throughout Western Queensland as the man who sold everything for one dollar and five cents.

Commercial operations ceased completely after the flood of 2000 and the loss of the garden and mango tree.

Young Willie Mar died quietly in 2007, the last of the Chinese market gardeners in Western Queensland.

The site is a rare and significant heritage place that demonstrates their practices.

It also tells the story of two generations of immigrant men who continuously provided fresh fruit and vegetables to Winton for almost 70 years.

When you walk around Willie Mar’s Chinese Market Garden you walk on a journey of culture and time to a place where the Chinese market garden was alive with activity and a sea of green vegetables.

Both father and son Mar undertook a lifetime of honest work and are remembered as a valued part of Winton’s community.

Both men are buried in Winton’s historical cemetery.

Its presence serves as a reminder of the long association Chinese settlers had with these areas and the significant contribution they made to the health of the communities.

Today, we think times have changed. Yet look around and you see the same prejudices, the same attitudes to entitlement have been exposed.

Just when they had thought to had been buried.

Scratch a little and you see they were only skin deep.

A lonely shed, a lonely life.

For more on Winton, visit here.

17 comments on “The Loneliness of the Chinese Gardener”